Goddamn it, Sirabella, how do always manage to top yourself...

Late last year my favorite studio ever, Media Blasters - more specifically, their Tokyo Shock subsidiary - released DESTROY ALL MONSTERS on DVD and Blu-ray, using Toho's own HD remaster from the original negative as their starting point. After several months of expected delays, the US release delivered on its Special Edition status, including a new English language commentary with notable English speaking "Godzilla Experts" Ed Godziszewski and Steve Ryfle*, the vintage AIP English dub (supposedly sourced from a VHS recording of a TV broadcast), an extensive production gallery, even the Ken Films Super 8 version of the film as an Easter Egg. While a pretty typical Toho HD restoration, with the expected hazy focus, funky processed grain and weak black levels that typify everything they touch, overall Media Blasters hit that release out of the park...

...except for the little fact that they never sent a check disc to Toho. Reports suggest that Toho wasn't happy with them using a wide variety of random images in the galleries over the complicated ownership rights that Japan deals with (and most of the rest of the world doesn't), and ordered a cease and desist on all further wholesale of DAM. I could also be a ponce and point out that some of the images in that gallery are repeated up to four times, but that's neither here nor there. Whatever was already "in the wild" sold out quickly, and as it stands the Media Blasters Special Edition DVD will set you back $40, even used, while the Blu-ray will easily double that price tag. 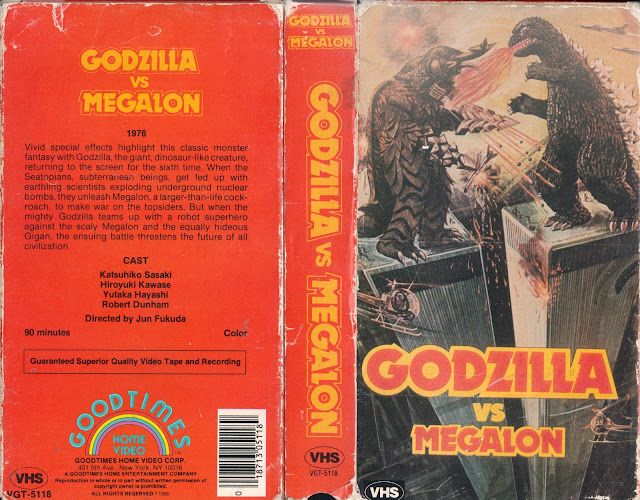 So here we are a year later, and their latest rubber suited monster mash epic - GODZILLA VS MEGALON - went straight to DVD, rather than a simultaneous SD and Blu-ray release. Sirabella swore up and down that after the DAM Incident of '11 that GVM would be a bare-bones affair, and heck, they never even pressed copies of GVM, so a delay was only natural while they made up with their Toho Overlords and came up with a strategy that'd satisfy both sides of the Pacific.

And yet, according to the one guy who's been nothing but transparent about the issues surrounding MB and Toho, consumers are reporting that there are, in fact, two separate pressings of the title filtering into all major retailers - some from 2012 that are, indeed, limited to the feature and trailers, while other lucky bastards are getting the initially promised 2011 Special Edition, complete with the Stuart Galbraith IV commentary track!

I'm so shocked by this turn of events, my only possible recourse short of writhing, shrieking, Lovecraftian insanity is to post Megalon Rule 34. John Sirabella, you are forcing my hand to post kaiju softporn. I hope you're happy with yourself... 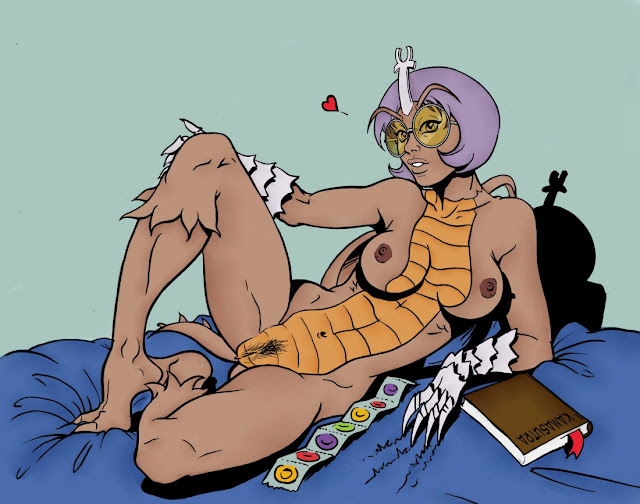 KNOW THE RULES, DAMN IT!


What on Earth are we to make of this? It's not so far to think that John Sirabella was lying through his teeth the whole time; he had already produced a batch of discs for retail release of GVM, didn't forsee DAM to be the disaster that it was, and decided "Fuck it, just sell 'em off and hope nobody notices". Considering the discs were replicated in 2011 and they include materials that only Media Blasters even has access to, nothing else even makes sense. The only other possibilities - that MB pressed copies AFTER they had created a rift with the content provider with the intent to sell them, or perhaps that they got copies made that he wasn't aware of when he made the statement - but resold them instead of destroying them, regardless of if the content on them has been released with Toho's consent - really don't make Sirabella into much more than a skeevy opportunist either way.

I'd be more angry/giddy ("Addy?" "Gigry?") about all this if I didn't figure that Media Blasters was already circling the drain... along with the rest of the home video market in general. I have little doubt that any recourse MB takes with Megalon is going to lose them money at the end of the day, and while this is exactly the kind of short sighted nonsense that got them in trouble to start with, I've heard from sources close enough that I trust them totally that they've been struggling to move so much as 1,000 copies of most of their Blu-ray releases. At last, MB's miserable reputation for QC precedes their title selection, though having spoken with a number of licensors over the last few years, selling more than 3,000 of anything you could call a "niche market" title may as well already be a victory. It's a sad thought that those numbers barely keep the market alive, but this is why even licensors that haven't actively thrown in the towel yet - Blue Underground, Synapse Films, Unearthed Films, pretty much anyone cut from that cloth - have been mostly silent on announcing new HD titles for the last year. The market's tough, and at this point nobody's making any goddamn money selling other people's movies. It's sad, but that's the reality we live in... and it's brought down both larger and smarter businesses that Media Blasters, so the fact that I'm even talking about them fifteen years after Kitty first opened its doors is kind of a surprise.

Media Blasters has an almost unique position as one of the most consistently frustrating licensors in North America: Frustrating because they continually delay, short-change, and otherwise treat their own titles with less care and finesse than they deserve, and tend to do dumb shit that only drags whatever opportunity they had to success straight down into the crapper... like, you know, pissing off Toho by fucking with Godzilla, the only thing that keeps them relevant world wide. I've briefly met Sirabella and known a few people who used to work for him. I also know through friends of a wide variety of people Media Blasters has owed either money or credit to that surfaced either far too late, or not at all.  At this point, they're the bastard company I almost love to hate, because every single time they start delaying a title into oblovion, it's probably something worth watching and absolutely deserving of the asking price... it's just too bad any support thrown at it goes back into the Rube Goldberg machine designed to make you as a customer miserable. Sadly, I'm still waiting on that A-KITE Blu-ray... and still waiting to see if we even get an official announcement for an uncut Blu-ray, at that. 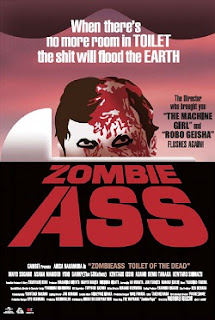 Oh well... In other MB related news, ゾンビアス ZOMBIE ASS: TOILET OF THE DEAD is their latest Tokyo Shock announcement - and hell no, Shinobi Girl doesn't count. I'd much rather give that cash to Discotek or FUNimation or Well GoUSA, or whoever else is left that hasn't kicked the bucket yet, but if Sirabella puts that trashy fecal-flinging undead epic on Blu-ray, he'll inevitably get my money.

It's really as sad and simple as all that: I'm here for the movies. Not for the labels, or the men who run them; I want to buy movies, and I'll do what it takes to feed my addiction. 'Nuff said.

* That's not to imply that these gents AREN'T full blown Godzillaphiles, but... how does one even quantify that, I wonder?
at 11:34 PM

Based on the tips in the linked article (that a CJ logo is on the version with extras) I went to my local FYE. They had two copies, both with said logo. I bought one and, indeed, it has the extras. It was $16.99, which all things considered, isn't terrible.

Just to warn those using said tip, my bare-bones version of GvM also has the Content Japan (CJ) logo on the back cover.

Hmm. Well, I guess I lucked out more than I realized.

How in the fuck can Media Blasters keep licensing shit when they don't even have the money to release the stuff they licensed years ago or get proper distribution for the titles they actually managed to release?

I'm under the impression that John Sirabella married a Japanese investment banker several years back. I can't say if that's the only reason MB is still kicking, but it surely couldn't have hurt...

The explanation posted by Sci-Fi Japan seems as likely (and perhaps twice as sane) as any other, so I'll take it at face value that it's true. If nothing else, at least we can chalk MB's replicators up as being as bad at their job as they themselves tend to be.

Also, not knowing whether Hellsing Ultimate was done in SD or not, are these upconverts? Looks to be that way.

Still, the DVDs didn't look so hot, so of course I'll take this over those. $35 from Deep Discount isn't terrible, I guess—but including three DVDs thus effectively jacking up the price is pritty sheet.

Looking forward to finally seeing episodes 5–8, though I wonder when/if we'll get the rest, AND if we're ever going to get the prequel comics printed in English.

HELLSING ULTIMATE 1-5 were all SD productions, and it looks like FUNimation got the same pre-upscaled masters used for the $300+ box set. I daresay getting the exact same material for $35 is a hell of a bargain.

And, yes, I want A-KITE in HD too. At this point I'd take the cut version just as a curiosity, but MB has fallen so far from their former selves I honestly have no idea if we'll ever see it or not.

That's a relief. I own the first episode on DVD and the back of the box says "Encoded from HD master." Just blowing smoke I assume?

I hope FUNimation does a bang-up job on the second volume if three-fourths of it is native HD.

Very interesting information, may be useful for everything