An Arrow To The Eye 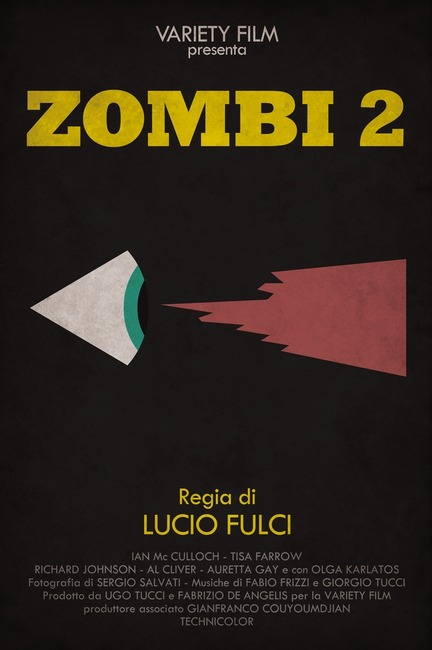 Don't lie. You want this on your wall as much as I do.

I'm going to say three things in a row I honestly can't believe I would ever, in a million years, get the chance to say:


1) I just pre-ordered an Arrow Video Blu-ray,
despite having sworn to never do that again. EVER.

2) It's a brand new scan of the original camera negative,
and absolutely wipes the floor with the previous restoration.

Blu-ray.com is goddamn hit or miss with their reviews, I admit, but I think the following two screenshots are worth a thousand words each and then some:

Need more than two not-exact-frame grabs? Gary's got your back. Y'know what, Arrow? I yield: You win. Even without knowing how good the compression on the actual disc is because of any possible JPG shenanigans, it's clear that you did exactly what you promised you'd do, and more importantly, from the looks of it you didn't fuck it up. This looks fucking amazing - I can actually see every single tooth in that bag's zipper, and the pleats on Tisa Farrow's shirt! I had zero doubt that there was detail lurking beneath the CRT scanner noise and sticky, fuzzy DVNR that turned the Blue Underground master into a monstrous, inconsistent mess, and you have exceeded my expectations at least three fold here.

Let's make something as clear as possible: I'm sure everyone at Arrow Video (and at least the vocal  majority of the people who hang out at the Cult Lab Forum) thinks of me as a pesky little bastard just waiting to tear each and every new Arrow transfer a new one, a sort of prose-spewing tick to pluck off and burn the wound closed as quickly and painlessly as possible. I get that; most critics aren't half as OCD as I am, and even some I find quite honest and respectable try to temper their disappointment because, at the end of the day, they're getting free shit and you tend to not keep getting free shit when you say "Wow, this is a big wet sack of ass!"

Understand that when I complain about DEMONS (or whatever I'm on the rag over that month) looking badly compressed or having a borked mono mix or, whatever, it is my panties are in a barbed-wire twist over, it's not because I get off on complaining. Not mostly, at least! It's because I'm legitimately disappointed that you guys just didn't quite stick that landing. I love these movies, and it's clear that you guys do, too. That's when you regurgitate the Blue Underground master with a reversible cover and a new interview all I can do is sigh, shake my head and wish someone would care enough to get this shit done, and properly at that! From the look of it... you've done exactly that. You looked at Blue Underground's previous work, stuck your nose up in the air and said "I think we can do better".

Y'know what, guys? You did do better. 14 Pounds is yours, and since I don't get Amazon kickbacks anyway, the above link's proceeds are instead going straight to the very Blu-ray.com review that convinced me to pony up. I'd recommend everyone else who's Region B capable does just the same. Alternately, for those who have a boner for Arrow's "Quad Box" slipcover designs, it's available from THEIR WEBSITE as a limited edition of 500.

Seriously, Arrow, keep this up and I'll be the happiest, brokest goddamn Yank you'll ever know.

Thanks to Michael at Land of Whimsy for pointing out that it's opposite day in Apocalypseland... and things couldn't be better.
at 6:00 PM

Hey Kentai, sorry to be the bearer of bad news, but guess what just happened with the Kite blu-ray!

I love your site, when i finally get a blu-ray i will be using your recommendations on quality for my purchases! Only just afforded a decent 1080p TV :)

Please keep on telling it how it is, suck up every last byte of unnecessary DNR, roll it around your mouth and spit it back into the face of the unloving corporate whores that try to ruin the films we LOVE!

This could be a golden age for 70's/80's horror on blu-ray if the companies put in the same amount of love we have for these films.

People like yourself are taking the time and effort to show them we demand it. THANKS!

I've had my own criticisms of Arrow, particularly on the technical side of things where their encoding is often pretty poor to downright atrocious, so I was right there with you in surprise over them having a new master done for their BD release of Zombie. It's terribly exciting and now that's just one more reason to get an all-region player, right alongside the Tetsuo double feature and now Second Sight having announced that their BDs for Re-Animator and Bride of Re-Animator are going to be transferred from the in-progress German restorations. All these goodies I'd just love to have, all locked to Region B.

Also, dammit, I was looking forward to Kite so much, but I'm not terribly surprised it got canceled. Kind of expected it but was hoping against hope.

Wonder how far they got with it?

I'm glad Sirabella cancelled A KITE. I'm sure he'd have found a way to fuck it up. Maybe someone else can do it justice in HD eventually. Now, if only he'd cancel UROTSUKIDOJI III as well. I'm beyond sick of waiting for it.

As for ZOMBI 2 aka ZOMBIE FLESH EATERS, I just got an email that my copy has shipped already! Looking forward to it.

If you haven't listened to the AV Forums podcast interview with restoration supervisor James White at http://www.avforums.com/forums/podcasts/1709764-zombie-flesh-eaters-special.html I urge you to do so. It's a real eye-opener with an interview, revealing a lot about the thought and process behind the end result. White has some particularly interesting comments about the BU release, and while he's obviously doing his best to be polite about it, it doesn't take a genius to read between the lines. The most interesting revelation for me was that, despite BU claiming to have sourced their transfer from the negative, it turns out that the rights holders, who have the negative in their possession, had never heard of BU!

If Sirabella and pals are finally done for good... well, it's about goddamn time. They've been crapping up films I love in varying degrees for over a decade now, and while I'd buy KITE in HD from anyone, if we can finally lay the specter of Media Blasters to rest, I'm willing to never have it.

I listened to the discussion with Mr. White this afternoon, and it's fascinating stuff. I'll have far more to say on the matter once I've gotten the Arrow release in hand, but my current question is this:

If Blue Underground didn't actually use the original camera negative, what the hell is it they're scanning at LVR on their cute little promotional video "How to Make a Beautiful Zombie"? It's a two-perf negative stock that's for sure, but is it even of ZOMBI 2? And where on earth did it come from, if not Variety? Who else would even have access to an archival print, except for...

...but if that's the case, why do the work in Rome to begin with?! I'll revisit this soon, but argh, so many more questions have been raised!

So glad to hear of your approval. I have been on the fence about double dipping on this one, but if you of all people says it's worth it...then I'm in. Plus bonus features galore. way to go arrow

Welp, here's another update on Kite: turns out it is indeed cancelled, as the "negative was in terrible shape."