Night of the Living OH COME ON! 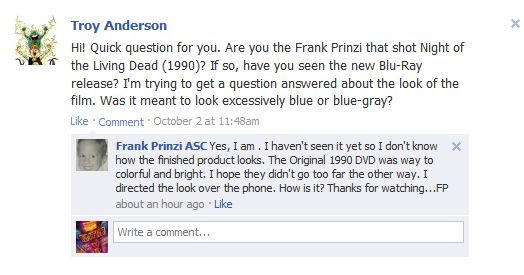 ...waitasec, this is how DP's approve transfers now? They leave the colorist a post-it saying "MAKE IT DARKER" and are never even consulted on the finished results?! Fantastic.

I don't care two bits about this release anymore, but I had to share none the less. I'm too busy drowning in my bitter, bitter laughter.

UPDATE: It gets even better!

Just so we're clear, the director of photography who was "consulted" on this dramatically overhauled HD master, based on screenshot comparisons with the previous transfer he himself was unhappy with, thinks it looks terrible. He also never "approved" of the 2010 transfer because he never actually saw it - still hasn't, from the sound of it!

Allow me to repost Twilight Time's response on the matter, with the relevant bits bolded for emphasis:


As promised, we have discussed NOTLD at the studio and are able to verify via SPE's Mastering Department, that our Blu-ray is indeed the approved transfer from 2010, generated for the film's 20th anniversary, and done in consultation with the film's director of photography. As you will have also seen on this page and elsewhere on the internet, director Tom Savini has now had a chance to view the end product and declared it "fantastic."


Approved by WHO, exactly, is what I'd like to know. Neither Tom Savini nor Frank Prinzi ever saw this master before the Blu-ray itself came out, and while Savini can say it's "fantastic" all he wants, he's wrong. And even his own DP says do.

Then again, who decides what a film's "look" is in the long run? The director, or his director of photography who actually created that look in the first place? And who's right should the two come to butting heads 30 years or so down the road, anyway? I mean, it's not like that's ever happened befo-- 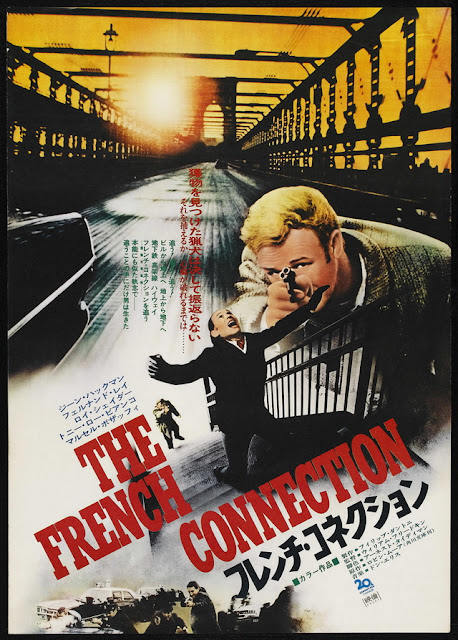 So, according to THE FRENCH CONNECTION controversy and even William Mother-Fucking Friedkin (if only bi proxy I admit), the Twilight Time Blu-ray release of Tom Savini's 1990 NOTLD sucks. That's about as closed a case as we're probably ever going to get on the matter, and I'm... moderately satisfied with it, I guess.
at 10:49 PM

That's ridiculous. All this toting and assuming that the DP was involved and all he did was tell Sony over the phone what to do with the timing? DP-approved my sweaty dick and nuts!

Although I will say that I personally still very much like the look of this Blu-ray. I went and bought the HDX version on VUDU and download it to my PS3. I'd definitely agree it's way too bright, although the BD is too dark and color-sapped. I'd have happily preferred something in the middle, but the BD's still nice. Whatever.

I feel sorry for the DP and in an odd way Savini* too. Here we have this much derided movie done decades ago that they hardly got any compensation for and much of the problems aren't their fault if the production history is to be believed. Yet they still have to answer for it.

I'm also starting to second guess Twilight Time as an overpriced middle man. Shout's new deals have yet to be proven profitable I guess but when day after day Cliff MacMillan says Twilight Time's model is all that's financially viable and then one day Shout says they're going to announce new studio catalog titles week after week that total 180 can break your neck.

Christine is a few months away so I guess I'll have plenty of time to think it over. But with the market moving more and more to uber expensive limited editions you start having pick which of your children you truly love the most.

(*)I say an odd way for Savini because historically he's hated how the film turned out and not wanted to talk about it. Only very recently has he begun to warm up and open up about it. So for him to say he likes the new transfer is both good and bad. I'm glad he's able to find enjoyment with it but it's too bad that turns off the small fan base that the video releases have garnered.