BREAKING NEWS FROM THE FARHERLAND! 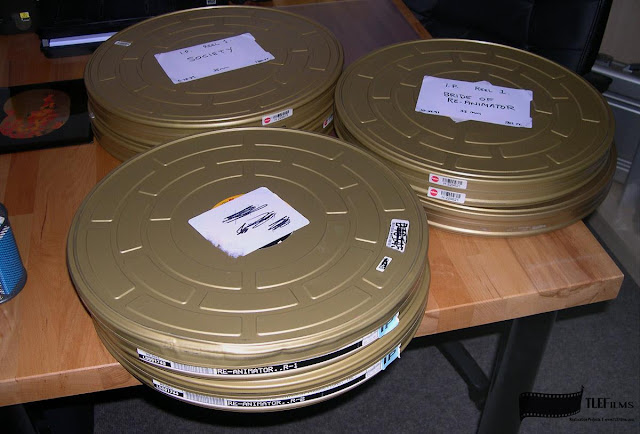 What you see here are 35mm IPs for the Brian Yuzna produced SOCIETY, BRIDE OF RE-ANIMATOR, and against all odds even the original Stuart Gordon helmed RE-ANIMATOR!! German distributor CAPELIGHT posted the recent info on the German-language CINEFACTS web forum, the most interesting tidbit of which - a post by the TELFilms German film lab - has been translated by our awesome pal Gurotaku:

SOCIETY and BRIDE OF RE-ANIMATOR will be remastered using a 5K Sensor/ 2K data in 16bit, working from the Intermediate Positive

RE-ANIMATOR will be remastered using a 5K Sensor / 4K data in 10 / 16bit working from the Intermediate Positive and from the Original Camera Negative. The fact they are working both from the IP and the camera negative is not explained in detail. Apparently this film has "special aspects", which probably means technical issues.

Trailers for all three films will also be transferred from IP elements using a 5K Sensor/ 2K data in 16bit.
Considering the last RE-ANIMATOR master was made in 2004 and the camera negative wasn't involved at any point, this can only be fantastic news for everyone who thought the "US Master" released by Image Entertainment was... y'know, kind of a piece of crap. Evidently the German distributors Capelight saw the HD tape materials and refused to work with them, asking for an actual film source so they could do it right.

TELFilms wasn't done being awesome though... nope, here's the rest of that post, complete with the goodies you're probably waiting for:

Attached are a couple FULL GATE screenshots from SOCIETY, the only film they have completely finished the color timing for. The final BD will be masked in the correct AR. The two screenshots from BRIDE are to be considered works-in-progress.

Ignore the massive, god-awful compression artifacts: These are 1:1 copies of the 2K scans that were posted on the Cinefacts forum, and while they show a clear indicator that they are taking this shit seriously, odds are the grain structure and fine detail will be dramatically improved when it's not been compressed down to nothing so that a handful of German forum posters can quit scoffing and get excited about their local release. No word on bonus features, region locking or "forced" German subtitles, but I can guarantee you that any dedicated fan will be willing to either ignore or work around those problems to finally get the nasty, gore-soaked Brian Yuzna produced HD perfection we've all been waiting for.


Y'see that, Image Entertainment? THAT'S HOW YOU FUCKING DO IT. Capelight is officially my favorite Blu-ray distributor of 2013, and I didn't even know who the fuck they were an hour ago-- oh wait, no that's quite not true, because they also released Beat Kitano's yakuza/gangsta fusion film BROTHER, and I'm damnably close to pulling the trigger on it, despite the lack of any English subtitles for the Japanese-dialog scenes. I'll gladly pay up-to-and-including $50 for each and every goddamn one of these new transfers, what with the way the exchange rate I'm sure that's exactly what it'll set me back. But if those full-frame grabs up above are any indicator, I'd say it'll be worth both the wait and the expense.

Now I'm curious if we'll get the alternate "R-Rated" scenes in HD for RE-ANIMATOR... I always wanted to see a "Complete Version" via seamless branching, and man, wouldn't this just be the absolute perfect time for that?
at 7:20 PM

4K for Re-Animator is so ridiculously awesome and out of this world. Whoa.

Can't wait for the slack-jawed yokels who thought Image's BD looked great to see how the new master compares.

I just hope it's not B-locked. I'll put up with an absurd import price for a film I adore, but region-locking would really make me whimper.

The Capelight BD of BROTHER does have optional English subtitles for the Japanese scenes. So purchase away.

Kriz: I'm curious why they're treating RE-ANIMATOR to a 4K scan and the sequel only to a 2K? Not that I mind, certainly, but 2K is more than enough data for Blu-ray, and while I expect major players like Sony or Warner Brothers to go that extra mile, it's a bit of a head-scratcher here.

Perhaps the materials are in roug shape, and this restoration will find its way back into Yuzna's hands in one way or another? 4K is typically used as a "film out" quality backup, so I'll be curious to see if TELFilm has anything else to add to this before all is said and done.

Gurotaku: Sweet! All the "official" materials say it only has German subs, so this is certainly a pleasant surprise.

That looks absolutely fantastic. TLEFilms certainly know what their doing, going by their track record.

By the way, have you seen this? http://www.blu-ray.com/movies/Zombie-Flesh-Eaters-Blu-ray/46904/#Review Looks like Arrow had ZOMBIE retransferred and have blown Blue Underground's LVR-sourced CRT jobbie out of the park. Colour me (very) surprised and (genuinely) impressed.

Thank gravy someone went and redid Zombie. Maybe this will mean good news for the rest of the Fulci catalog, though I'm guessing nobody's going to front the money to restore them all beyond the LVR work.

B-locked. Yet another reason to get a blasted all-region player.

The BROTHER release does have a few problems: http://caps-a-holic.com/hd_vergleiche/comparison.php?cID=1432#auswahl

I hope Kentai doesn't leave tons of noise/grain as ShoutFactory, and other companies do with so many titles.

The most recent Blu Ray of "Re-animator" was a noise filled, overly grained, mess of a Blu Ray.

I do wish companies that do crummy jobs of burningg/pressing discs would stop calling noise "grain". It's insulting.

There are times when you suffer the disease being treated immediately, before things got worse. Thank you for the information:)