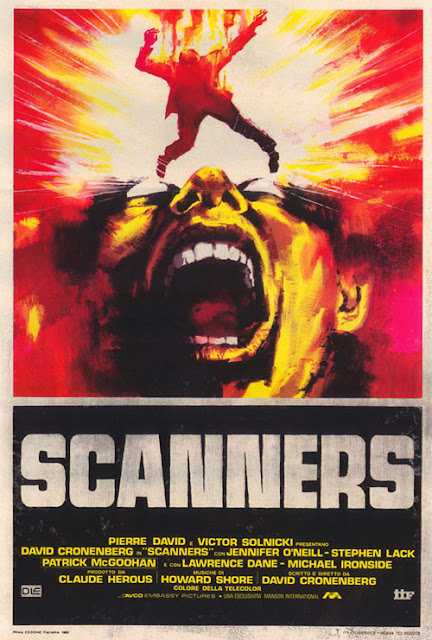 Last year, I briefly covered the Koch Media Blu-ray of David Cronenberg's inexplicably classic science fiction experiment SCANNERS. That release was so god-awful it gave the word "upscale" a bad name, and I'd have sooner suggested anyone within earshot wiped his ass with fifteen Euros than actually paid for that atrocity.

Thankfully for the impatient Cronenbergophiles among us, German label FILMART? BLACK HILL teamed up with SUBKULTUR-ENTERTAINMENT and have just released a completely new Blu-ray of the film, and the A/B COMPARISON at Caps-A-Holic couldn't possibly be any more in their favor. MGM HD had shown the film from a high quality 1080p source since long before Koch's miserable upscale, so while it was inevitable that we'd get to see it eventually it's still nice to see just how dramatic an improvement this release is!

Bonus features aren't exactly epic in scope, but you do get a still gallery, original trailers in both English and German, and the rather rare treat of a "Music and Effects" track, which are common on archival tape masters but almost never find their way out to the general public. It's also got a new interview with Stephen Lack (presumably in English)* and a commentary with Narcus Stiglegger, a German pop-culture aficionado who founded the German "Ikonen" magazine. I'm going to go out on a limb and assume that's not an English friendly feature.

For those interested - and word is the disc is region free, despite the case promising "Region B" only - just make sure the cover looks like THIS. Full color, Ironside's looking off to the right, and a big ugly "UNCUT!" blob on the cover. Koch Media had a funky monochromatic design, which was suitably drab for the shitty transfer it held. There's also a LIMITED EDITION (1,000 copies) from FilmArt that comes in a Digipak with a booklet and a DVD copy - nice of them to offer different editions and price points and all that, but I just don't see anything there worth an extra 10 Euros.

We know a Steelbook from Second Sight is just around the corner, and rumors of Cronenberg having recently visited the Criterion Collection offices leave me suspicious as to what other title of his they'd be interested in that they haven't already got materials for... but regardless, we finally have a stellar video presentation to tide us over until somebody gets their act together and can present a truly definitive release.

* I evidently wish it was interview with Michael Ironside, but maybe that's where Criterion can pick up the slack.
at 3:53 PM

Actually if you use the other side of the cover, the ugly "uncut" and FSK16 rating logo are gone, it's called a "Wendecover" :)

A reversible cover, you say? Wunderbar!

I can understand the want to make ratings easy to find and understand from a marketing standpoint, and I assume they're now a legal requirement, but damn, those FSK labels make the BBFC ratings look downright dainty!

Some Aussie labels have a "Clean Cover" listed as a bonus feature. With how obnoxious and invasive all of those OFLC warnings are, I can't blame them for promising that something just a little less ugly is hiding under the shrink wrap.

Cronenberg's visit to the Criterion offices better be related to a BD release of CRASH.

Yes, sure looks like Criterion will indeed be doing SCANNERS. I'm curious if Cronenberg is willing to be part of the special features for them. He turned down an interview request from Subkultur, stating that he had already said everything there was to say about the film.

Just to get this straight: the ghastly old upscale was puked up by Black Hill Pictures; Koch Media was just the distributor and has nothing to do with this release in particular.

I wasn't aware that Koch was serving as distributor only - that helps explain why this is such a stark contrast to their impressive INFERNO set. Still, the fact that they didn't tell Black Hill Pictures to cram that Digibeta right back up their ass doesn't speak too well of Koch's level of quality control...

I've written several letters to content providers, basically saying "Sorry, your crappy upscale isn't fooling anyone. Do you want to provide us with the original SD source, or should we just fail this right now?"

I actually JUST got a promo copy of this in (quite unexpectedly) with shipment of German pressbooks I picked up off of eBay, and can confirm first hand that it looks terrific indeed - huge upgrade over the DVD, not to mention the other so-called Blu-ray.

Funnily enough, Black Hill look responsible for this as well - the copyright is theirs, and their logo is right next to Subkultur's on the back of the case.

The german company FILMART has nothing to do with this release. Subkultur is a sublicensee of Black Hill Pictures and did this edition completely alone. And hell, the actor is called STEPHEN LACK, not MICHAEL ;)

But anyway, it's indeed a very dramatic improvement and I'm glad to have it.

Michael Ironsides is the only actor in this film worth noting. No wonder I subconsciously wanted him to replace the rest of the cast! Fix'd, though. Thanks.)

As for the confusion over Filmart, THIS POST is one of the very few posts like it that's not in German. If I'm wrong, well, so be it. One of those little issues that crop up when you don't speak a wide variety of languages.

There is some weird confusion about both labels since FilmArt always looks like the little sidekick of Subkultur. It's strange, but both companies have nothing really in common and both do a good job on their releases but I personal prefer the Subkultur stuff since they release much more interesting flicks and their releases are always stunning labor of loves.

Article extraordinary interest, may be useful for many people