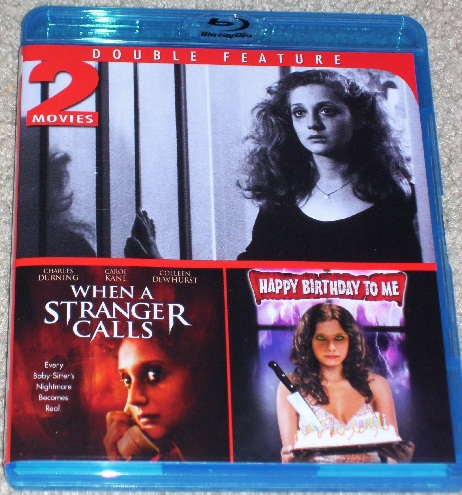 Sony Pictures' deal with Mill Creek has led to a few misses - such as that HOSTEL Double Feature that plays the wrong audio over the single included ending - but this is a pleasant surprise! And yes, just in case anyone's unsure, that's the 1976 original version of WHEN A STRANGER CALLS, even if they're trying to modernize those on-set photos so hard it'll give you eye cancer.

What's most surprising is that HAPPY BIRTHDAY TO ME - other than them not using the original badass poster, I mean - had its soundtrack edited for the 2004 DVD, and yet the original score has returned for its High Definition home video debut. Music editing is one of those things that always makes me wince a little and then try to move on - I get it, music rights are just that fucking expensive - but hearing these gaffes corrected always warms the cockles of my black, shriveled heart.

If you want a copy, you're going to have to swap your dashing fez and monacle combo for your filthy "ironic" trucker cap and make your way to the nearest Wal-Mart. It's a surprise in-store exclusive until April, and as it's selling for $5 out of the gate, it can't be one that's making anyone a small fortune.

How is the HOSTEL double feature in terms of picture quality? Mill Creek is selling a flawless version now, and I might pick it up, since it's dirt cheap...

According to the DoBlu REVIEW, the Double Feature is more or less the same as the stand alone releases with a bitrate hovering around 24 Mb/s. Lossless English 5.1, HoH subs, and a price tag for two major Hollywood releases that's less than a Quiznos grinder... not sure how much sweeter a deal like that gets.

None of the extensive DVD extras are there, though. That's a shame, considering how unintentionally CREEPY some of that behind the scenes footage is, particularly Eli Roth talking at length about how unpleasant European toilets are compared to their American cousins whilst walking around a public restroom basically naked, showing off just how Bear that Jew can be.

Was any of that necessary? No, not really. But it's ten times more watchable than the usual "OMG Mr. Soandso is, like, a VISIONARY and we all had SO MUCH FUN working with--" talking heads EPK bullshit.

The issues with Happy Birthday to Me's soundtrack were ironed out when Anchor Bay hammered out their DVD a few years back, so I guess that carried over to this Blu-ray release too. I'm pretty thrilled with how great one of my all-time favorite slashers looks and sounds on Blu-ray, especially considering how cheap the darn thing is.

Haven't given When a Stranger Calls a look yet, though. The last time I watched the movie a lifetime ago, I seem to remember liking the first twenty minutes or so well enough but finding the rest of it pretty much unwatchable.

With no new bonus features or any major mentions on the front cover, I always thought the 2009 re-release was basically the same thing as the 2004 Sony DVD. Odd that AB would license it with the sole intention of restoring the soundtrack and nothing else - makes me wonder if someone pulling the purse strings over there just happens to have been a big fan?

You're not alone in how you feel about the other feature, either. I told a friend of mine at work about this disc popping up in the wild, figuring he'd be interested, and he immediately got excited and talking about how that first reel of WASC is just a a MASTERPIECE... and then it all turns into a shitty TV movie after that. All I could do was laugh, and promise him I'd pick up two copies if I wound up near a Wal-Mart in the near future.