Koei-Tecmo's multi-format fan baiting extravaganza, FIST OF THE NORTH STAR: KEN'S RAGE 2/真・北斗無双, was released in Japan in late December and remains set for a North American/European release in early February. I gave the first game a fairly positive review here when it came out, and while I stand by everything I said: The game does an admirable job of condensing the Hokuto no Ken saga into a linear, arcade style beat-em-up adventure, with an "original" storyline that puts the forces of Hokuto and Nanto into a bizarre 'what if?' scenario that'll be of interest to fans familiar with the universe of Buronson and HARA Tetsuo. It does, however, get slightly tedious once you've finished the two main storylines and are basically just grinding the 8 playable characters to unlock the rest of their finishing moves that (at that point) won't actually help you beat the game anyway.

Understand, the game was announced as a part of the Dynasty Warriors franchise right from the start, so nobody can claim they didn't know exactly what they were getting into; repetitive grinding with a half-dozen characters on the same map using a total of four main attacks and occasional limit breakers is basically that franchise's whole thing, and I'll fault nobody for either loving them or finding them boring as shit. I've got one foot in both camps, but seriously, you got to play as fucking Jagi, steal a thug's motorcycle, and shoot missiles at a 10 foot mutant before whipping your Hokuto Hyakuretsu Ken on his stupid face. Every word of that sentence is awesome in a blatant fan-wankery sort of way, and the moment I start apologizing for it is the moment I start apologizing for loving Hokuto no Ken's unbridled, borderline parody level of grotesquely 80s machismo in the first place.

Now, here's the stickiest of wickets; Sony has a blanket policy that all disc-based games MUST have English audio upon their US release. They can have other languages - in this case, most notably Japanese - as well, but an English dub is a necessity to appear at Best Buy and Wal-Mart. Based, I'm sure, on "meh" sales of the first game K-T decided to release this in Japanese with subtitles only. Hey, groovy - I never listened to the dub on the first game anyway, and have some difficulty understanding why anyone would. In other words, Ken's Rage 2 has become a download-only game in North America, because Sony said fuck subtitles.

Meanwhile France, Italy, and possibly other areas that grew up watching Kenshiro murder-fuck the entire human race as children, are getting a port of the positively bitchin' Japanese Collector's Edition: 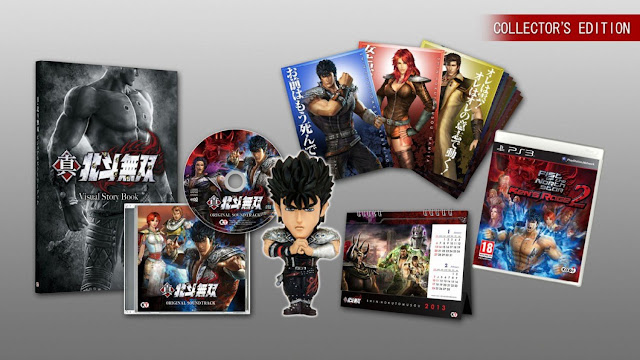 Visual Storybook, a postcard calendar, art cards with (presumably) DLC for the original manga outfits, the original soundtrack CD likely missing the new V6 themesong, and a goddamn 4GB USB stick shaped like Kenshiro. This is fucking AWESOME... and as an American I get offered not one scrap of it. The "International Version" probably has more blood, I admit, but if I can't save MP3's to Kenshiro's dick, I'm still a sad violence entertainment junkie.

Importing is theoretically an option, but at 99 Euros MSRP it probably would have been cheaper to have bought the Japanese release. I also have no clue if 720P games are rejiggered in Europe to playback at 50fps - a curious glance through various forums suggest that I'm in the clear on that one - but at the very least it'd put me in a shitty spot should I want to experience some DLC. And if that means more chapters of the original manga are brought to life, you bet your ass I'm interested.

At this point there's no word on the price tag for the US Download Only release, but I have little doubt I'll bitch and moan, pop a new fucking HDD into my PS3, bend over and bite the bullet in the end. I've loved Hokuto no Ken since even before purchasing VHS tapes every month at Suncoast Video was a thing, and I have little doubt that cult favorite franchises like this won't be available on disc much longer anyway. Still, for this to be a title that got slapped with the DL-only model just fills me with... well, you know.

EDIT: Since I didn't specify this earlier, apparently the US Xbox 360 version will still be released on physical media for the full MSRP of $59.99. No word yet on the size or price of the PS3/WiiU releases, though.
at 10:23 AM

Not having played the first game but thinking it looked pretty fun, that collector's edition makes me...want to buy the second game. But for the cool goodies. Which we were gypped of.

Depending on the price I may get the download, but damn...way to screw us outta something cool.

I was gifted a PS3 with a 120GB drive years ago, and have yet to swap it out. Must be about that time, since I tried to download the demo for METAL GEAR SOLID: REVENGEANCE and was told I didn't have the 3.4 gigs required to do so.

Adding insult to injury I bought a 3TB drive for my PC recently (maybe a week ago) and tried to install it today. Once that's done I could dump all the garbage on a pair of 1TB internal drives and then dispense those out to the HTPC/PS3. But when I try to boot with it on it keeps freaking my PSU right the fuck out, and then crashes moments before it can explode in slow motion. Not sure if it's a BiOS issue or what, but it's annoying as hell, especially in light of KEN'S RAGE 2...

Drives larger than 2TB use a different form of block addressing (4kb rather than 512 bytes). This sometimes causes anything not expecting this to throw an enormous hissy-fit, from BIOS to XP (Vista onwards should be fine). There may be a jumper on the back of the drive for 512byte sector emulation, and/or there may be a BIOS update for your motherboard.

Don't think SATA 3.0 drives have jumpers anymore and the first thing I did when it started being a massive cunt was disconnect everything but the blank 3TB drive... so yeah, it's pretty much got to be a BiOS issue.

Either that or a MoBo/PSU just refuse to work with it because fuck that drive, man. Going to both assume and hope it's the former.