My Little Sister Can't Be This Expensive 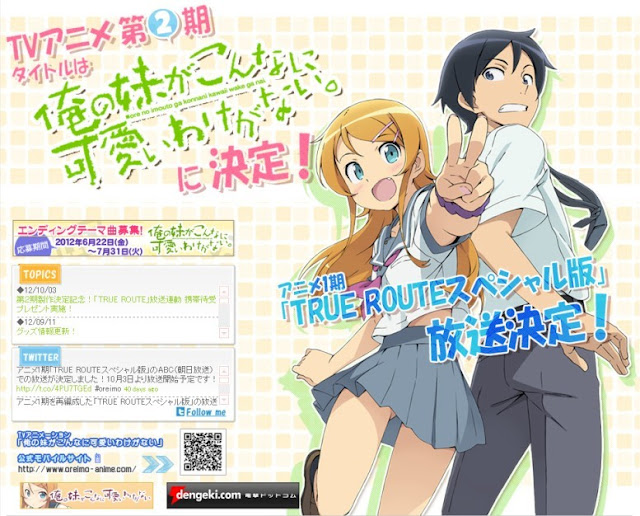 Fans of the only slightly-satirical exploration of otaku culture, OreImo: My Little Sister Can't Be This Cute/俺の妹がこんなに可愛いわけがない are going to get more of the fantastic TV series starting in April. This is good news in the Kentai household, as I thought the show was a well realized, charming piece of  fluff that basically revels in how silly this little hobby of ours is at its core. One of the funniest goddamn things I've ever seen as a nerd willing to share that which tickles my fancy is the "Viewing Party" episode. If you haven't had this exact infuriating experience, at least once, you aren't sharing your affinity for nonsense hard enough.

Whatever misgivings I had about turning the vices of creepy young men into a peppy young lass who keeps her fandom (quite literally) in the closet was basically ended with the episode where Kirino spends the entire time playing a galge in which you carefully weigh your options to molest cute pubescent girls; if there was ever a moment of clarity and truth in  this show, this was the one. Kirino is one of us, putting on a pretentious, cloying facade of somehow being better than everyone else with the same fascinations, but at the end of the day it's just who she is, and if we're comfortable with it, nobody else's understanding of our fantastic vices and affection for entertainment comfort food should matter in the first place! Trash is treasure, friends, and as long as you know the difference on your own terms, why do you care what other people think? OreImo's sole piece of advice is "to thine own self be true", and it does it by showing you how absurd and self-servicing the very entertainment you consume is. It was the logical next step after The Melancholy of Haruhi Susumiya, and at least as of this writing hasn't mostly been nullified by a second season that serves as epic trolling more than narrative advancement.

We've been supporting the show since its broadcast by the most sensible manner we found: My wife owns all of the non-variant Good Smile figures released so far, and we only held off on the initial Aniplex of America LE DVD set because... well, it was a goddamn DVD. The show was animated in HD and was already getting Blu-ray singles in Japan, so why buy an SD release? We figured patience would pay off, and a recent announcement had - at least at face value - proven that we were due a High Definition, English subtitled release eventually.

2/27 is the official US release date for the OREIMO BD-BOX, and at first I was excited to give the show a re-watch... but then, I saw the odd note that it was an "Import". Aniplex of America has done this before, and it means we're actually getting the same exact box set as Japan, which already has English subtitles on it. Heck, we talked about this when I bought two out of three of those mostly-awesome RUROUNI KENSHIN OVA sets, and I also purchased the R.O.D: READ OR DIE box, though admittedly the latter I only grabbed up when the price had sunk pretty dramatically in an effort to get rid of whatever stock remained. That's the same reason I now own the stripped-down US release of BACCANO!, despite never once having seen the show or knowing much about it beyond "it made everybody flip their shit".

On the one hand, that means we get the same as-of-yet-unseen impressive packaging... on the other, it means that we're paying full Japanese prices. In this case, $278.98, which is A) the "discounted" price from the seemingly arbitrary $329.98 MSRP, and B) due to a number of factors, that means it's actually $30 cheaper to import the fucking thing from Amazon Japan, shipping included! If that doesn't raise any fucking red flags, I don't know what could.

Look, Aniplex... I get it, I do. You're catering to the bleeding edge fans of these shows, and goddamn it, I was right there with you when I paid over $200 to get all three Puella Magi Madoka Magica LE sets, in part because I was curious if you'd make good on that threat to make a "Bonus Item" TRSI would ship out, should it ever materialize. (They didn't, by the way.) I was walking along the proverbial edge, ready to pull the trigger for Bakemonogatari, despite the fact that $150 is slightly more than Shinbou's indulgent experiment is actually worth. You're trying to find that sweet spot between the cheap assholes who want everything to be $30 a season and the crazy Japanese bastards who are willing to spend $100 on two goddamn episodes, and sometimes you figure a title will shift more one way than the other. I won't fault you for seeing where that line is, even if you think it changes for each and every title.

Personally, I wish more BDs were $50 "Limited Edition" deals sporting new transfer instead of a $20 bargain release that looked like crap, and yes, I acknowledge that high quality releases should cost more due to the investment they clearly require. But where's that line? At what point do they put a product on the market that's so over-priced that you just can't justify it? For me, this is the goddamn line. There reaches a point where you've gone too goddamn far, and for you to be selling a $330 Blu-ray set right next to a $60 DVD set with the exact same content is my personal limit. I'm not mad, I'm not boycotting you or even suggesting anyone around me does the same. I'm just... not gonna' fucking buy this. I wish I could. It was something I really wanted. But the terms just aren't worth it, not for this, or for any show I can think of. If the set ever hits the $150 mark, I dunno, maybe we'll revisit this.

Make no mistake, OreImo is a fantastic series, and one both your time and your paycheck... it's just not worth $269, not unless you regularly spend that much on Japanese imports to start with. You guys do exist the world over, and I admire your enthusiasm, even if I don't quite share it. I could literally get a half-dozen shows of the same exact length from FUNimation, Sentai Filmworks or NIS America for the exact same price, and as disappointed as I am that OreImo won't be one of them, I think that's exactly what I'm going to do.
at 9:04 PM