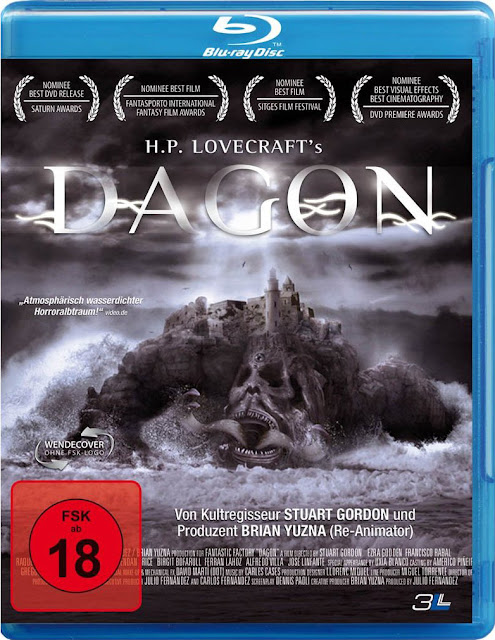 The cover itself is promising you that there's a less FSK
heavy option on the reverse side. Jesus, Germany...


I was lucky enough to watch DAGON on 35mm a few weeks ago, which to both director Stuart Gordon and producer Brian Yuzna's recollection might have been the first time an actual print was played in the United States. On the opposite end of the viewing perspective, this could literally have been the very last movie I ever rented on VHS, and despite having thought it was pretty good I never picked it up on DVD, so my memory was a bit hazier on the whole thing than I'd like to admit. Upon a second, much-belated viewing I think I like the film better than when I'd seen a fuzzy pan-scan print, finally getting to appreciate just how atmospheric and uncomfortable the mostly untouched Spanish locales the film takes full advantage, and the film's big twist - which actually begins in the first reel and only becomes obvious towards the end - works better than I remembered. Ezra Godden was decent enough a bastard who couldn't have worse luck if he'd tried, and having learned that he was actually British but perfected a flawless American accent gave me a new level of respect for him as a performer. Macarena Gómez also impresses as well as the pagan priestess who shifts gears seamlessly from childish damsel in distress to sadistic murderous psycho-bitch without missing a beat. Celebrated Spanish character actor Francisco Rabal also makes something of an extended cameo in the thankless role of a filthy drunk filled with exposition, but he does a lot with just a little and is rewarded with, easily, the most disgusting set piece in the whole movie.

Dagon - or, really, Shadow over Insmouth - is perhaps looked at less fondly than Gordon's other attempts to bring H.P. Lovecraft to life due to its troubled, decades long history. The plan was actually to shoot this as a sort of sequel to Re-Animator with Jeffery Combs and Barbara Crampton as the stars, but a lack of sustainable funding and being unable to find a suitably scummy New England fishing village half a century after the original tale was penned kept pushing production back, until Gordon and Yuzna had essentially pushed it off to produce a string of other Lovecraft-themed works, which ended in Gordon directing the thematically similar From Beyond and Castle Freak (and, much later on, Dreams in the Witch House), and Yuzna directing a pair of sequels to Re-Animator, an interesting choice considering there was lore left over to explore, even though the titular character was torn to shreds in the final reel of the first film. It's never as overtly grotesque or emotionally as its better known Gordon/Yuzna/Lovecraft brethrin, but Dagon is still a great, perhaps underrated horror film, and likely the most complete, faithful, and on some levels perhaps even the most satisfying adaptation of Howard Philips' universe of eldritch terror to date.

The only part of the film that really drags it down is the clumsy CG, which was pretty bad even when the film was released in 2001, but it only crops up in a handful of scenes and the over the top nature of the material meant they had to roll the dice one way or another. The majority of the film's effects are of the practical variety, and all of them look fantastic, as do the religiously themed set designs and unnerving score which literally uses the now ironically legendary Call of Cthulhu chant as its basis. There's little doubt that Guillermo del Toro's At the Mountains of Madness had at least the potential to take be the "Ultimate" Cthulhu Mythos movie, but unless Del Toro and Tom Cruise can convince producers that $200 Million is a small risk to take on an R-rated 3D horror film based on an 80 year old novel that sounds almost suspiciously like the 2011 "premake" of The Thing (which flopped pretty hard), I'm happy with Gordon's film taking the top spot on the pyramid of cinematic attempts to bring Lovecraft's madness into the 20th and even 21st century.

Naturally I was excited when I saw that a new German Blu-ray was making the rounds... and then immediately recoiled when I saw the CAPS-A-HOLIC COMPARISON with the R1 DVD. I'll grant that the German release is a minor upgrade over Lionsgate's horribly compressed DVD, but the total lack of fine detail, grain, and heavy issues like edge-ringing and aliasing all make this look suspiciously like an SD upscale. Even if it's not an upscale and I'm just being thrown off by a terrible HD master (as was the case with Image's 2012 BD release of Re-Animator), I stand by my bitter disappointment. The 35mm print I saw was full of print damage and had a generally soft, hazy appearance, but it still looked substantially better than anything in those above comparisons. The fact that the US DVD KINDA' SUCKS compared to the uncut German release makes this comparison even less telling than it could have otherwise been.

If you're still on the fence, also keep in mind that this is the FSK 18 cut of the film, which is missing 20 SECONDS. The FSK board might as well be dragging their balls all over the negative with that cut!

Censored, upscaled, and not even a sweet Digibook to distract you from the rest of those issues? Yeah, this is one German release I'm going to sit out. It's a damned shame, since having been reminded how good this movie is I'd love to get my hands on a nice HD release.
at 3:17 PM

This has done some theatrical runs with a print? Sad that didn't come to Minneapolis.

I rented this on DVD a number of years ago and was really sucked in by the atmosphere. It's pretty telling that the ambience and creep factor is so strong that the bad CG effects didn't distract from anything.

PS: Synapse announced Demons and it sounds like Demons 2 is probable. Not sure I'll pick it up since I'm not crazy about either film, but at a good price it might be good to upgrade my DVD(s). And considering just a month ago I was considering getting the UK set, yeah, this is a much better option to me. Better compression is a for-sure thing even if the same masters are used.

Maybe I can persuade Don May to get the rights for Tetsuo: The Iron Man and Body Hammer and release those... I'm really trying to cut back on my spending at the moment, and have decided that a region-free player just isn't something I want to throw money at right now...as much as I'd like that new Zombie BD. :< Just can't justify it, so the more US releases of B-locked titles the better.

I caught a 35mm screening of DAGON in 2002 courtesy of Exhumed Films. The show was about two weeks after the DVD came out, so it was a nice opportunity to compare the two. I thought it played *much* better on film; the DVD print was overly bright and only accented the spotty digital fx instead of helping blend them the way the darker theatrical print did.

Quite a good little movie, like most of Stuart's work. Hopefully someone will give us a proper HD presentation!

Bruce: Cool, neither I nor anyone involved at Cinefamily were aware of a US 35mm showing of DAGON. I expect they'd want to parade around an expensive 35mm print if they had even the slightest reason to. The print I saw certainly was dark, but that's normal, since I'd imagine any BD release would be a scan of a low-contrast IP, while a theatrical print would be a third-generation print.

Kriz: If I'm not mistaken the guys who are making the special features for Synapse's current batch of releases have done interviews related to DEMONS 2, so I assume it's just a matter of time before we hear that announcement.

Already owning the Arrow Steelbook, my reaction to the whole thing was "meh". I'll probably pick them up eventually, even if it's just to show everyone who called me an asshole how amazingly fucked up the Arrow Video encode was (sad, isn't it?), but it's fair to say that most of the enthusiasm I had for the title being in HD from the OCN has ebbed over the last year or so.

If nothing else, it'll be nice to see if Arrow did any errant grain removal on the first film. I don't see any obvious smearing artifacts, but it's surprisingly smooth for a mid-80s Italian production, y'know?

I tried to watch Dagon some years ago, but was put off by the bad acting and overall cheap feel, and never got past the first 40 minutes or so. I think it's high time that I give this one another shot though...as it seems I become more and more forgiving as the years go by. I remember a day when I couldn't even sit through Lucio Fulci's Zombie! yikes!

Decided to get on with it and watch Dagon last night. As I suspected, I enjoyed it quite a bit this time around. Although I still think Ezra what's-his-name is an incredibly unappealing leading man, the film has more than enough to make up for it. The makeup effects are wonderfully creepy, and the way Gordon only shows us fishy bits and pieces by the glance for the first hour is extremely effective. I especially loved the fishmen who have lost their ability to walk and are shown limping or rolling around on a cart! Still though, I can't help but consider how much better the film could have been with someone like Combs in the lead (and maybe 10 years earlier). That Ezra fellow really blows hard. Hated him in the Masters of Horror episode as well.