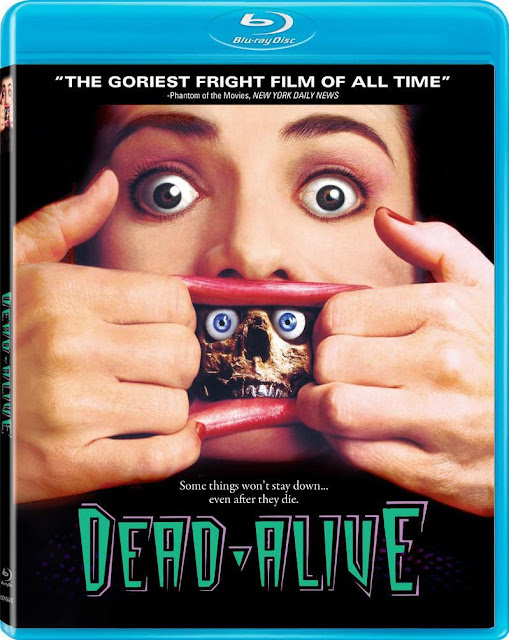 Hey, she has the same expression I do!

Despite only having come out a little over a year ago, the sole High Definition home video release of Peter Jackson's watershed splat-stick opus, DEAD ALIVE (or "BRAINDEAD" to damn near every country that is not 'Merica), is already out of print. And yeah, it's "Out of Print" in the way where eBay and Amazon sellers have already raised the prices five times its list, of which they likely paid half of on release day. Gods, we live in strange times...

The consensus seems to be that Trimark Pictures' rights to the film - which, in turn, became Lionsgate's rights when they bought them out around 2000 - have finally expired. To put this into perspective, that's about 13 years after the initial Trimark/Lionsgate DVD was released in North America, so these guys had a pretty goddamn good run with it, financially speaking.

Keep in mind that while this is one of the single best things on the planet ever made... it's still cut by over 5 minutes. Supposedly this was the director's preferred cut, but I think we can all kindly shut the fuck up with that nonsense, unless someone can point me to a new interview where Jackson disowns the original Kiwi version and not give me the same second-hand quites IMDb has been milking for 15 years running. Seriously, the continuity on the US edit is all over the place, trimming some of my favorite jokes and leaving the fate of several of the film's most iconic spleen eaters unsettled! But I know, I know, anyone remotely familiar with this movie knows all of this, so discussing it beyond "Yes, it's still cut!" is about as productive as pissing upwind. So pardon me while I zip up.

As I said when the disc came out, it looks PRETTY DAMN GOOD, all things considered. Not perfect, largely because it's surely sourced from a 20 year 2nd Generation IN. Make no mistake though, it's substantially better than any SD release available - particularly when compared to the overflowing cornucopia of appallingly piss-poor (but uncut!) PAL versions floating around - and word is the insanely grainy look is similar enough to theatrical screenings that what you're seeing is just... y'know, Braindead, in all of its lo-fidelity, $3 million budgeted glory.

If you see this kicking around for the $20 MSRP, pick it up now, because this bad boy is already starting at over sixty bucks used. The fact that LG lost the home video rights means they've probably lost all broadcast and digital streaming rights, too, so unless New Line Cinema really wants to whore Jackson's early works to tie into The Hobbit Trilogy, this is as good as it's gonna get for a while.

I hate needing to say this, but I honestly wish Arrow Video would pick up the slack and do this title some uncut HD justice. Jackson's been threatening to restore all of his early films for nearly a decade now; if he does I'll gladly sell my damn plasma to upgrade if need be, but I'm getting old and impatient! I want Braindead, Uncut, and in HD... is that so difficult? Seriously, is it? 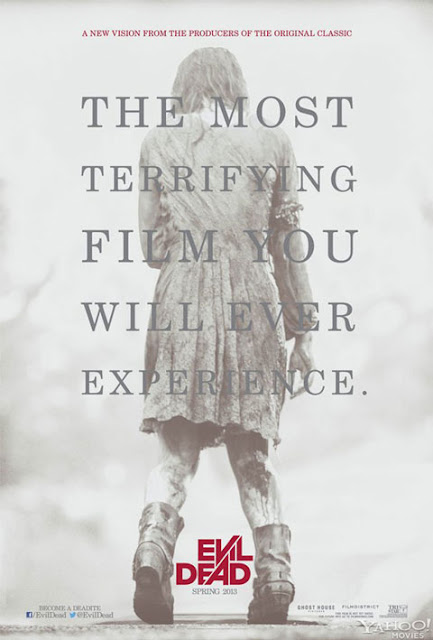 Oh well. Just a few more weeks until I can satisfy my love for practical bloodlust with Fede Alvarez' remake of The Evil Dead. I'm honestly super excited to see that... go figure.
at 11:22 PM

I was baffled to find Dead Alive OOP. Glad I nabbed it; pretty sure it's still shrinkwrapped. Oh no...what if it's not the right disc????

I still feel like the US cut is more streamlined and fun, but I've only seen the uncut Braindead three times and unrated Dead Alive fifty bajillion, so familiarity is probably what's making me prefer it.

I'm excited for the Evil Dead remake as well. Judging by the redband trailer, it looks brutal as all get-out and really creepy. I also like that they're going for mostly practical effects that are enhanced by CG. I think that's a good way to go about it.

I have to admit that the only two remakes I'm interested in seeing this year are "Evil Dead" and Spike Lee's take on "Oldboy". Yeah, I know the Korean version is a freaking masterpiece, but the remake has a great cast( especially Josh Brolin) and a great cinematographer( Sean Bobbitt, who shot "Shame" and "Hunger". The remake is also shot on film). Plus, the remake already has Chan-wook Park's blessing. From what I have read online, it will be every bit as dark and uncompromising as the original.

Kriz: Bah! I say just torrent the damn BD and watch that copy instead. You've supported the release, and it's not as if LG is losing a second sale or anything now that it's OOP.

What's interesting is some of the trailers have CG "enhancements" (ie: removing the tubes that squirt gore) and some of them don't. My understanding is that Alvarez wanted there to be absolutely zero CG, if at all possible.

I'll admit I could be wrong, though. I've not read all of those gigantic on-set reports that Bloody Disgusting has been parading around for months now, and I have little interest in doing so unless I adore the film and do so retroactively. These days, the less I know about a film the more likely I am to see it fresh, and the more pleasantly surprised I might be for it.

Anon: I won't argue that Brolin and Jackson could be a hell of a pair for a story about bitter vengeance, but my reaction to OLDBOY becoming a Spike Lee Joint has always been "meh". Better than the proposed Spielberg/Smith line-up, sure, but I'm still ambivalent, at best, towards the suggestion.

The appeal of Chan-Wook's movie was Park Chan-Wook and Choi Min-Sik, two men who crafted something original and jaw-dropping out of a supposed adaptation. It's how far removed from the source material he and his crew were willing to go that made the film the shocking, unforgettable success that it was. The "magic" wasn't really the story of a man locked away for 15 years, it was in how Chan-Wook himself told it.

But I could be looking at this all wrong. Maybe Lee's film will be an actual, literal adaptation of Garon Tsuchiya's comics, and the differences between Tsuchiya and Chan-Wook's scripts is dramatic enough that they might as well be different stories entirely... but who am I kidding? I'm sure I'll see it opening weekend regardless, even if it's with eyes narrowed and jaw clenched for two hours.

It'd certainly be far more interesting than David Fincher making the same exact fucking adaptation Niels Arden Oplev made of The Girl with the Dragon Tattoo, which I totally don't see as a massive waste of time and money for absolutely everyone involved...

Heh, at least Fincher's Dragon Tattoo gave us an awesome three-disc electronic soundtrack by Trent Reznor and Atticus Ross. For those, uh, who care about that sort of thing. (I do; I know Michael Mackenzie hated it.)

I've yet to read the Old Boy manga but I own the whole damn thing. Should probably finish my brother's copies of Berserk first before I go starting on yet another series.

So you're upset that Braindead is cut on video... yet you're willing to go and support a new film that was cut to secure an R rating with the MPAA. Vote with your wallet!

I read on a New Zealand news website that Bad Taste has been restored, and the other 2 are being worked on, but Scream Factroy and Arrow Video have both made attempts to get his early titles, but apparently they won't negotiate anything until The Hobbit trilogy is all finished with. :(