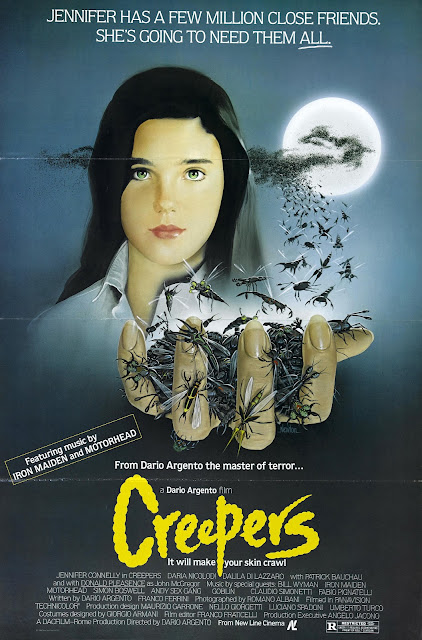 Like the lot of you, I recently* heard that Synapse Films had walked away with the rights to Lamberto Bava's DEMONS and DEMONS 2, and Dario Argento's TENEBRAE (or is it "Tenebre"? Tenebres? Unsane? Shadow? Whatever...) and PHENOMENA. True, all of these have been given an uncut release in the United Kingdom by Arrow Video, but I've had my fair share of honest, at times scathing criticism towards the lot of 'em. Doubtless the label will continue to have its defenders, even for this quartet of deeply flawed released, but I'm nothing if not honest when I talk about this stuff: When a disc looks or sounds like crap, I notice, and then I tend to show up here long enough to vomit out my feelings about it.

It all usually leads to anonymous forum users calling me an assclown fuckfart who doesn't know a film reel from a banjo shoved up a donkey's ass, but whatever. I calls 'em as I sees 'em.


Curious, I contacted Don May Jr. and ask him for any details he could share with me about the materials he expected to receive. There's a lot of good news to be had, and one point that I'm deeply frustrated by, but this is what I know...


DEMONS will, as I had suspected, be based on the 2K master Arrow Video created with Ciniteca di Bologna using the original negative, but they're going back to the initial, "raw" scan to create an entirely new master with proper color grading. Not only will we no longer have to deal with elevated black levels, but the day-for-night shots in the beginning of the film will be dealt with properly, which was something so far down on the list of big problems I had with Arrow's BD that it wasn't even in the Top Five. Still, awesome that Don May and company are being pro-active and fixing everything instead of just the stuff that made me blow a personal gasket.


Synapse is also tracking down the best materials they can for the "USA" Mono dub as featured on the various New World Pictures VHS and the Arrow Blu-ray, the "UK" Stereo dub as has always been included on pretty much every other DVD release ever, and the original Italian mix. In short, we're looking at the definitive DEMONS, and as much as the thought of double dipping on a Lamberto Bava Blu-ray makes me wince, it'll still be nice to see how thoroughly Synapse mops the floor with Arrow's sloppy attempt.


DEMONS 2 will, again, be based on the Arrow Video/Ciniteca di Bologna 2K master, but they're going to see what can be done to improve it. One needs only compare it to the Anchor Bay DVD to see that something went awry here.

The materials for the cheaper, crumbier sequel have never been all that good to start with, so honestly, if we can walk away with a new encode that's got the proper day-for-night timing and doesn't suck low bitrate balls, I'll be happy enough. The only downside here is the thought of actually watching Demons 2 again...


TENEBRAE will, indeed, be based on the same master as Wild Side's French release. The French disc is mostly gorgeous (a handful of scratch repair artifacts aside) and sounds fine, so there's nothing more to say; it'll be great barring some bizarre authoring glitch of Titanic proportions, and if you want a copy of this excellent transfer without forced subtitles, sell the Wild Side disc now and get this once it comes out. Done deal.


PHENOMENA is going to be based on a new scan created by Wild Side as well, and with Tenebre above being any measure, I'm sure it'll look and sound... well, phenomenal. Supposedly Dario Argento and Romano Albani participated in the creation of this new master, which is interesting, if nothing else. The bad news is that Wild Side made a new HD master of the 110 minute "International" version, not the 116 minute "Integral" version that appears on the Arrow Video Blu-ray and pretty much all German and Japanese prints. The reason behind this is, interestingly enough, because Dario Argento says the 110 minute version is his preferred cut of the film.

Synapse is getting access to both Wild Side and Arrow Video's materials, but point out that the audio issues involved in re-creating the 'Integral' version have left so many audio issues that they aren't sure how to proceed yet. Having spoken to a friend who tried to re-create a "Perfect" version of Phenomena on DVD, I can confirm that short of creating a brand new mix with archival three-track elements, there's never going to be a "seamless" Integral version in any language but Italian.


What this means for the Synapse Blu-ray of Phenomena, I don't know, but I'm expecting us to get the 110 minute version in higher quality than ever before, with a number of deleted scenes in Italian. Maybe if we're lucky we'll get the 116 minute version as a bonus feature? Who knows. These releases are very high up on my radar, though, so if I get any more info before they're actually out "in the wild", I'll let you know, friends.


UPDATE: The missing Day-For-Night shot occurs at 09:38 on the Arrow BD, which cuts from the low shot of the girls looking up at the theater to a close-up of the neon sign and then slowly pans down to people walking in the main doors. I've included a pair of caps showing the Arrow BD (top) and the Remastered Austrian DVD (bottom). 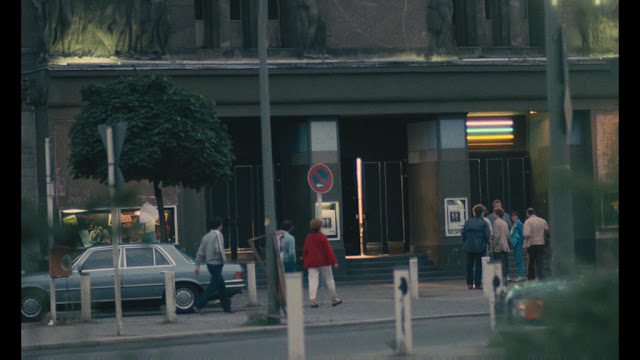 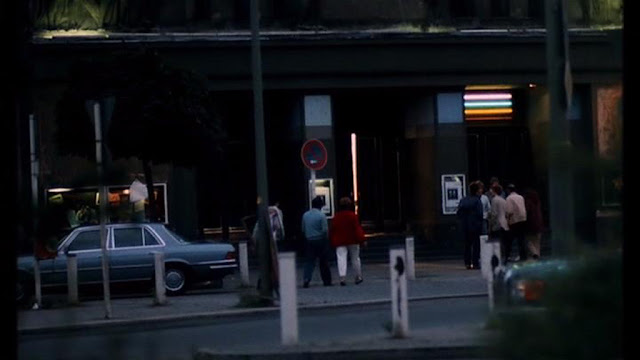 I will definitely double dip on Phenomena if their is a significant PQ upgrade...one of my favorite Argento pics. Oddly enough, Tenebrae is my least favorite of the "classic argento era" (i know everyone loves this flick), so I probably won't upgrade from my Arrow BD, even though it's damn shabby. Demons 1 and 2 I will have to wait and see...i was fairly pleased with the Arrow releases (aside from the audio). Can you expand on the day-for-night photography issue? Even if the transfer during those scenes isn't fully faithful to the theatrical prints, I thought they looked wonderfully moody...Also, I was totally floored by the scene of Rosemary in the bathroom when she first goes demon...I thought it looked absolutely gorgeous.

So is Synapse the new Blue Underground or what? Is it time to truly throw in the towel for BU? When, and from who, are we finally going to get Opera? And what about Suspiria? Is hoping for a release that doesn't look like it was raped by a unicorn becoming a lost cause? I certainly hope not. But with this fuckin remake in limbo (which I actually think will rock if it ever gets made), things aren't looking good...

Argento WOULD prefer the inferior shortened cut of his own film (re: Phenomena). Still excited for that one as well though.

I liked DEMONS 2.
The first was much better for millions of reasons but the second was still fun.

To be honest, PHENOMENA is the only Arrow Video Blu-Ray up to now that I've been disappointed in. When things like Battle Royale and Dawn Of The Dead get 3 discs for different reasons you would think that somehow Arrow could get enough special features to at least fill out 1 disc a little more for Phenomena.

I don't know what DEMONS and DEMONS 2 is like yet though.

Tommy, BU still has OPERA. Red Shirt Pictures Michael Felsher was on the Deadpit podcast last Friday and said that BU wants to release it on Blu, but there is no HD master of OPERA available and the company that owns the film is large and difficult to deal with.

Hopefully, LVR will have burned down by the time BU/OPERA's owners get around to creating the master for OPERA thus forcing them to use a quality facility.

Tommy: I'm... not sure, actually. Can't claim to be a Lamberto Bava expert by any stretch, though I'm curious myself, as the only scene I can think of that'd be the likely culprit would be when the girls are heading to the theater.

Or maybe I misunderstood and it's DEMONS 2 that's supposed to have a DFN filter applied? I'll update the post if I can find out exactly what Don's talking about.

Nah, I kid. It's... okay. Not great, but it's so absurd it has a kitschy charm I guess I can understand. And, to be fair, the first time I saw Demons 2 I laughed so damn hard I actually woke my wife up from a sound sleep... that damned hopping muppet gets me every time!


PHENOMENA is a tough gig to do bonus features for these days, since the big story is that this was Jennifer Connelly's first leading role. Call me crazy, but I'm willing to bet you could get a half-dozen Sergio Stivaletti interviews for what Jen's agent would charge just to arrange a five minute phone interview. Argento's already done a commentary, and we've had plenty of behind-the-scenes footage and anecdotes from the crew over the years.

Now it would have been nice of them to include one of those vintage documentaries (say, DARIO ARGENTO: AN EYE FOR HORROR) to make the package feel just a bit heftier, and including the butchered CREEPERS print might have been a fun bonus... but honestly, what else is there to say about Phenomena that hasn't already been said?

DWK - well hey thats semi-good news! I'm just glad to hear that BU still has an interest in releasing anything on blu ray...

thanks for the update on the day-for-night shot. Doesn't bother me enough to blow the whistle on arrow though. But either way, if Synapse can blow their releases out of the water...Im in.

To whichever Anon tipped me off about the CAPTAIN AMERICA '90 Blu-ray (and then got deleted by mistake): I thank you.

From what I understand, Jennifer Connelly considers Phenomena to be quite vile, akin to a pre-fame nudie movie done only to get work. (Which probably explains her, IMHO, somewhat wooden performance - either that or she seriously grew as an actress afterwards.) Unfortunately it's not likely she will have any interest in talking about the film. :(