Don't Choke On Those S'mores 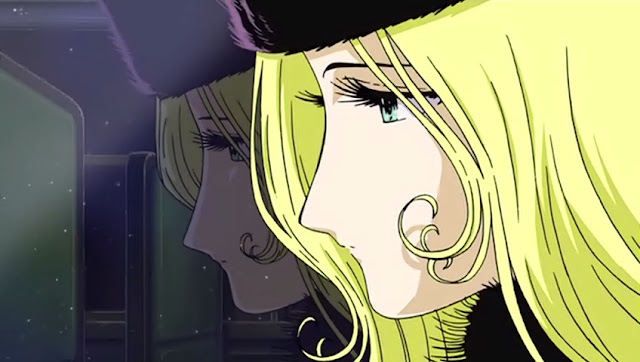 Maetel is lost in thought over how retarded this all was.

Remember S'more Entertainment, the company that licensed both Toei's absurdist shounen action show Bobobo-bo Bo-bobo/ボボボーボ・ボーボボ and the classic Leiji Matsumoto coming of age adventure Galaxy Express 999/銀河鉄道999 TV shows? (Yeah, me neither.) The former got released as a Japanese/English audio release with no subtitles and spanned two $50 MSRP sets, while the latter was hard-subtitled using the same analog masters we've seen on digital streaming services, with only one of four projected releases having actually hit the market. I say "one of four", but... that's probably not the case any more.

Both releases crammed an unprecedented 9-10 episodes per dual-layered DVD, and while screenshots suggest that the results were less awful than I'd anticipated, it'd take a forgiving eye to call them "good". In effect, you're paying for the quality I'd expect from an eBay bootleg manufactured in Hong Kong, but without the added excitement of knowing your shitty One Piece gatefold's profits might be filtering back to the Triads to fund human trafficking.

Apparently, it turns out a $50 hard-subtitled release of a 40 year old TV show nobody in North America really gives a crap about wasn't a hot-ticket item... that's quite a shock and all,  but on the other hand it's really not surprising in the least. Regardless, here's the latest from S'More's Faceplace Board:

"We're just holding back on the release date for the time being, analyzing sales and if sales on part one justify release of the balance of the series. With the advent of digital streaming and downloads, it's often difficult to justify the costs involved in releasing 4 DVD box sets."

Considering S'more were the guys who said that having removable, player generated subtitles - you know, the kind of subtitles that are on literally every fucking DVD ever made anywhere - weren't "justified" based on the projected sales to begin with... yeah. Sorry to the, like, twenty guys who gave two shits about this release, but I'm pretty sure that's the end of it.

Far more depressing on reflection is that Discotek/Eastern Star, the guys who basically crafted a perfect release of the Galaxy Express feature films (and damn, do I love me some Adieu Galaxy Express 999!), said that they were interested in releasing GE999 TV... eventually. They defied the odds and released all 152 episodes Fist of the North Star TV, and also went back to the Lupin III Well they once famously turned their backs on to deliver the first ever English friendly release of the original-original TV series (ie: not the more popular one both Geneon and Streamline molested over the years), so I have little doubt that even if sales had been less than hotcakey, Discotek would have done the right thing and finished it off anyway.

Which reminds me, for anyone still jonesing for some vintage Matsumoto goodness, keep in mind that Discotek does have the DVD rights to the original Space Captain Harlock TV show - and at 42 episodes, it's sure to be a single release, too! It's almost been a year since the announcement, but considering they've been busy releasing a whole bunch of cool shit over the last 11 months, I'm happy to be patient.

I mean, Christ Riding a Piñata, we've either gotten or are right on the cusp of getting Shin Hurricaine Polymar, Mad Bull 34, Locke the Superman, Shin Getter Robo vs Neo Getter Robo, Space Adventure Cobra and Golgo 13: The Professional (with UK and JP commentaries!) on R1 DVD. They've even released Little Nemo on Blu-ray, though you'd never know from the disturbing lack of reviews... Discotek might not be serving Harlock on a silver disc in the forseeable future, but there's PLENTY of great anime titles coming out of their pipeline to keep me busy.

Speaking of Space Captain Harlock, how neat is this?

Sorry, lost my train of thought. I dunno, do the sane thing and go watch Galaxy Express 999 TV on Crunchy Roll, like everyone who even remotely gave a shit about the show did back in 2009.

Man, when you think about all that Discotek has accomplished in the meager span of a few years, it's downright dizzying. I think sometimes I forget to be gobsmacked.

I don't inhabit the anime blogosphere intensely enough to have noticed either a lack or surplus of Little Nemo writeups, but hearing someone else mention it makes me want to get on it.

I bought S'More's GE999 first/only DVD release. And their first Bobobo set, but I'm not as eager to purchase the concluding Bobobo set now, knowing that it lacks subtitles.

I'm a fan of GE999, and I would have bought a competent release in a heartbeat. Unfortunately, what was released wasn't it.

That S'more couldn't even manage what has been an industry standard for nearly *fifteen* years for *two* licenses shows their contempt for their customers.

Given with what happened with Bobobo, it was amusing to see that instant they announced GE999, pretty much everyone called it 100% as to how they'd approach this release.

Yes, the series is primarily going to appeal to aged otaku who were there at the dawn of US anime fandom, but even such a small audience as that deserved a better class of product.

It might have even sold a little better - although maybe still not enough to get all 113 eps out though! Either way, hope Discotek grabs the series at some point and treats it with the same respect as everything else they've touched.

GE999 didn't deserve to fail, but S'more certainly did.

I wonder what the future of old TV anime licenses will be. It's been a long road just to get the most well known, the most influential, and the most tenacious old anime on sub-only DVD, so the likes of Creamy Mami, Lazyner, Dragonar will probably never happen. Perhaps on streaming, but no physical release.