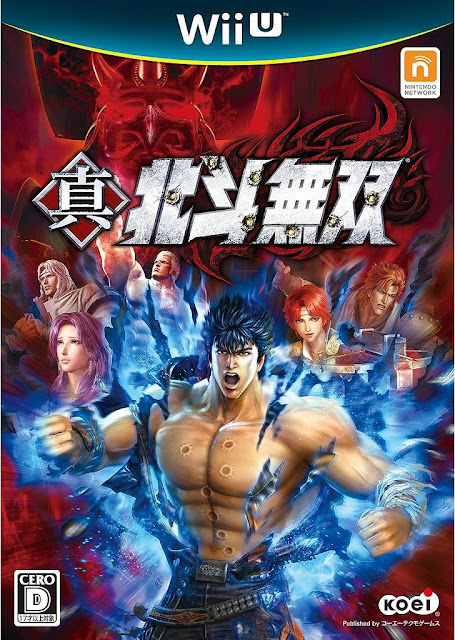 * Shin Hokuto Musou/Fist of the North Star: Ken's Rage 2 is a Download Only game on the PS3 (and Wii U) in North America. Xbox 360 users will still have the option to get it on disc.

* The only incentive you get for paying full price despite not having a disc copy is costume DLC, an offer which is good until March 5th and only includes a total of 8 "Classic" manga costumes (the same costumes available from the first game) and a bonus "Land of Asura" costume. In other words, they're buttering us up with STALLONE COSPLAY.

* Jim Sterling, one of the few vocal defenders of the first Ken's Rage in North America, THOUGHT THE SEQUEL WAS TOTAL SHIT.

What can you tell me about the upcoming Patlabor OVA Blu-ray? Can I get excited? 'Cos I'm getting excited. Picked the original OVA up on VHS over the summer real cheap and would love to see it in HD.

Bandai Visual did a new HD transfer for a Japanese release a while back with all 7 episodes on a BD-50. Can't say I've seen the discs myself (or 1:1 caps), but it's a Bandai Visual title, and they tend to create lovely, film-like transfers. Only extra it had to offer was a 16 page booklet, and I can't for the life of me justify that as worth an extra $90.

If you like the show, I'm sure this'll be well worth the reasonable price "Maiden Japan" is charging for it.

There's apparently a set coming out by Section 23. Think it'll have the same transfers?

Same master, absolutely. Same encode, probably not - but if Sentai's release of GRAVE OF THE FIREFLIES is any indicator, they'll do just fine with whatever high quality HD source they're given. The JP release is 7 OVAs on a single BD-50, no frills, and I have little doubt this will be essentially the same thing.

The only releases Sentai/Section 23 and all of their related sub-labels* seems to have trouble with are anything involving King Records, who love to hand them 1080i sources. They keep them interlaced, which could be a blessing or a curse, depending on how much they suck at the IVTC process. "1080p" content with undefeatable combing is worse than 1080i material you can fix on the fly, but 1080i wastes bandwidth, which means compression suffers.

MAWARU PENGUINDRUM has some unfortunate compression artifacts on its 1080i release, though not having seen the discs myself yet I don't know if that's a "once or twice" encoding problem (like FLCL's extreme, but infrequent, DVD pixelation), or if the whole show is awash with problems.

*The case art says "Maiden Japan". Supposedly Section 23 and Sentai Filmworks are different branches of the post-ADV fallout, but I don't know the details. I'm not sure anyone outside of Post-ADV really knows what it all means, either.

While I haven't played Ken's Rage 2 myself, as far as Jim Sterling is concerned, well, from my experience you should really just take anything that walking, 5 consecutive-heart-attacks-waiting-to-happen blob says with a grain of salt, regardless of what his opinions on the first games were.

And I'm definitely excited for the Patlabor bluray. From what it looks like, it is going to be dual audio, though they haven't exactly specified what the dub will be. Most everyone's money is on Section 23 just throwing on that absolutely cancerous dub from CPM's Matlin Recoding studio. Y'know, the one that, as witnessed by Justin Sevakis himself, had miscast actors just reading off of literally translated subtitled scripts, mostly because the director--one "Allen Gus"--didn't even show up to the recording sessions (And yet somehow, they were to get away with dubbing both the OVAs and the 70 episode TV series, with their work finally being cut off when CPM began releasing the "P-files" OVA).

However, I know some people are holding out hope that a re-dub is in the works, which if that were the case, well, I think we all know of at least English voice actor that--despite being in his 70s--people would be delighted to see reprise his role in Patlabor. You know the one.

Jim Sterling is, certainly, a man with TERRIBLE taste in movies and a questionable Willem DaFoe impression, but if nothing else I'd never question his brutal, transparent honesty; if he says he thinks a game is a pile of shit, he means it, and could give two fucks over conventional wisdom or the promise of publisher backlash. He also defended LOLLIPOP CHAINSAW, one of my favorite controller based experiences of the last 12 months. Considering he's paid to talk about the negative impact that things like sexism have in the gaming industry, the fact that he acknowledged it was ridiculous and then still reminded us that it was a lot of fun, and fuck you guys for not mentioning that, was a beautiful thing.

What's far more troubling is a personal friend of mine - both an avid gamer, and a huge Hokuto no Ken fan - recently said pretty much the same thing; it's missing content from the first game, it's uglier, and the inclusion of more levels and characters makes it a bigger grind-fest rather than a more satisfying adaptation. I'll have to try it for myself, clearly, but suffice to say his reaction didn't fill me with confidence that my $60 will be a satisfying purchase.

And to be fair, another friend of mine liked it, but to his credit he spent $100 on the Japanese Collector's Box... how unsatisfied can you be when you have a Kenshiro USB stick in your pocket?

At least I can save money on ALIENS: COLONIAL MARINES. Holy crapsnacks, you want to talk about a disappointment in the gaming world...

Well Kentai, you definitely have a point there, and I will say I do somewhat admire Jim Sterling for being able to take Eric Kain's side during that whole incident where Ben Kuchera from Penny Arcade tried to--in his words--"hurt [Eric Kain's] career badly" because Kain dared to talk about emulating some abandonware SNES game that was being sold on a cartridge.

Nevermind that Eric was only linking to an emulator (not a actual ROM) and even apologised for doing so when people took issue with it.

The fuck? The JP BDs were DNR'd to hell and back and contrast was boosted through the roof! Color bleeding like a woman's menstrual cycle!