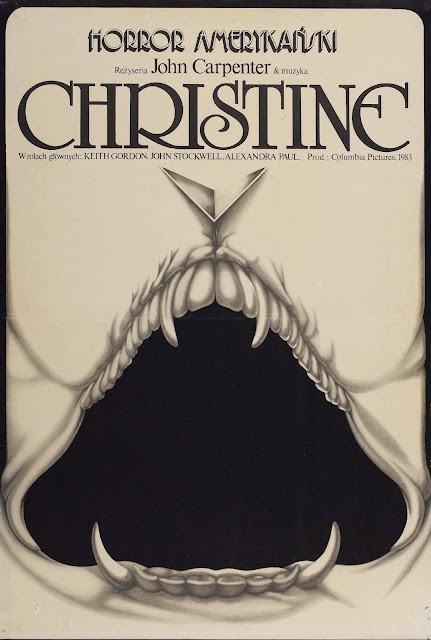 This thing sold out in eight hours!
(And, no, they didn't have the stones to use this as the cover.)

I'd planned to post something when I got back, figuring it would take at least the weekend to see this thing disappear... but no, it's gone. 3,000 Blu-ray copies of John Carpenter's seminal 1983 adaptation of Stephen King's CHRISTINE, sold in a single day. Fucking hell, that's incredible.

Twilight Time felt their Scalper Senses Tingling and set a limit of 10 copies per customer until they were down to 500 copies, at which point you were limited to just 2 copies a piece. That means, minimum, 500 people bought this, though I'm sure the numbers are somewhere between two and three times that, even before you factor in poor schlubs who missed the window by an hour and then ordered the cheapest copy on eBay they could find. It's a tough world out there for fans of Sony Pictures' "deep catalog" titles, and with it having been over a year and FRIGHT NIGHT is still conspicuously absent on the international Blu-ray market, it's hard not to get nervous that this might be the only 1080p video release for quite some time!

Honestly, I hope at least one or two motherfuckers who planned to score 50 copies and have already pre-sold them on eBay are going to have to eat crow on this whole thing. I'm all for capitalism of the sleaziest order, and with Screen Archives themselves (the sole distributor for Twilight Time's catalog) having limited it to 10 copies per buyer for the first 2,500 copies, it's pretty obvious they give absolutely zero fucks how much anyone is profiteering off of their handful of 'mainstream' horror releases (of which this is the third). Buying one to keep and one to sell seems perfectly reasonable to an opportunistic snake-oil salesman like yours truly, but if you bit off more than you can chew and put up 25 copies of a "Limited Edition" product you might or might not even have access to, sometimes you deserve to have it blow up in your damn face.

Either way, Twilight Time have done right by fans for including all of the previous DVD extras, and if you didn't pre-order it within, oh, two hours of Twilight Time sending out their "NOW AVAILABLE FOR PRE-ORDER" eMail flyer... well, sucks to be you, I guess. Sorry, guy, better luck next time I guess. 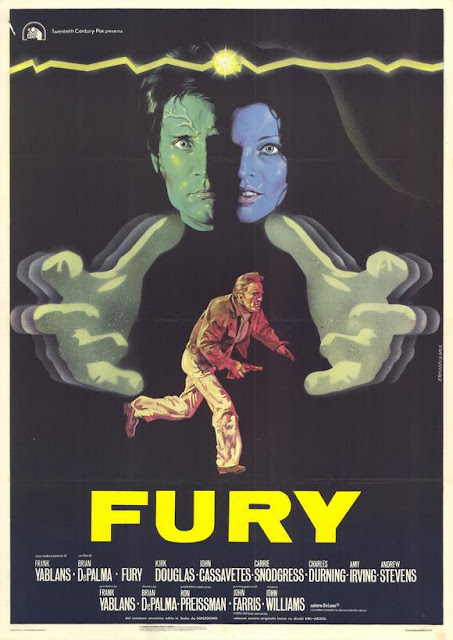 Meanwhile, Brian DePalma's apparently far less scalpable 1978 feature THE FURY is in fairly strong supply, with slightly over 2,000 copies still available. Make of that what you will.

I feel like I should probably grab this - and maybe make good on my threat to scoop up a copy of ENEMY MINE, while I'm at it - but both are a harder sell than Carpenter from his Golden Period. Granted, I bought NIGHT OF THE LIVING DEAD '90, and boy oh boy, didn't that turn out to be worth the effort...

UPDATE: There's been several people claiming that the 2 copies limit was started with 1,000 copies remaining. Every previous Twilight Time release did that with 500 remaining, and with no official announcement of this limit from Screen Archives themselves, I'm not sure if this is accurate or not. It'd be an interesting shift if so.
at 4:07 AM

Isn't the Fury going to get a Blu-Ray release in France later this year. I could have swore I heard that somewhere. If so I bet it will be much cheaper than TT's release and I also bet that's another reason this isn't selling all that well.

A French release of THE FURY? It's certainly possible, though I've not heard of it. I know THE EGYPTIAN (a Fox title) is available in France, but at over $38 through Amazon.fr, it's really not any cheaper than the Twilight Time alternative, and it comes with an uglier cover to boot. I can't imagine anyone siding with it (unless they speak French, of course).

I know Germany is getting both AS GOOD AS IT GETS and THE BLUE LAGOON later this year through Sony Pictures International, though. Both of those releases are about $22 shipped, but the threat of forced German subtitles and "Region B" locking make the extra twelve bucks or so the Twilight Time release cost seem more than fair.

Is it wrong that I kind of want to see CHRISTINE or FRIGHT NIGHT come out in Japan, where the going price would be about $50? I can understand people being upset that they missed a release - especially right now! - but seriously, the more I hear "an unlimited import for less than $30 is inevitable!" the more I just want to see it punch them on the tip of their cock.

Having not seen The Fury, I passed on that. Honestly, everything I've seen from trailers and Terror in the Aisles doesn't really pique my interest.

Glad I got my order for Christine in, and I'll be plunking down the cash for The Driver when that's available. Never seen it, but I adore The Warriors, and I caught some scenes on YouTube that I thought were really cool.

TT's business model is good for 90% of their titles. It's not good for titles like Fright Night, NotLD and Christine. That's clear. Unfortunately these one offs make TT more feasible then they otherwise might be. Therefore they're not inclined to find a solution.

It's worrisome that The Blob has apparently been pushed back to 2014. If you compare the rate of sales from Fright Night, NotLD to Christine you see it trending to faster and faster sell outs. Give TT another year for word of mouth to spread and a title like The Blob could sell out in an hour or two. The next bankable name could feasibly sell out in literally minutes if SAE is able to keep their servers running.

What are true fans to do?

I'm becoming less and less enamored with TT after each release. The wisdom of age has shown me that 4k or 8k will come in and we'll have the same song and dance all over again. I also believe all across the board the prices of these Blu-rays will come down. Salo, probably the highest price a DVD ever consistently reached at around $800 on eBay, eventually plummeted for the same reasons any of these discs could plummet.

I lucked out with Christine, but if I miss The Blob I'll just wait for the 4k which as I understand it is the very reason for the delay to 2014. I learned long ago not to chase windmills.

X-Human: While I thought FRIGHT NIGHT - a title that took a total of 6 weeks to sell out - suggested that these guys were on to something, a well known cult horror film like CHRISTINE selling out in less than a day does suggest that the infamy of their LE titles might be doing them more harm than good.

Of course, Screen Archives putting a limit of 10(!) copies per customer basically sums up how little of a fuck they give to the thought of them creating a secondary market run by scalpers; I'll admit I've bought two copies of both FRIGHT NIGHT and CHRISTINE with the goal of selling the other, but but selling one copy doesn't seem so bad. Buying ten makes you look like a fucking wholesaler, and yes, if this happens with THE BLOB I can see the thousand or so people this release pattern appeals to getting completely fed up with them.

But I have more to say regarding Twilight Time, so we'll discuss that soon...

Apparently the 8 hour sell out was a false alarm. It didn't actually sell out till the next day. I remember something similar happened with NOTLD when I thought I had missed it, and then ended up snagging a copy. This time I didn't fuck around...pre-ordered both right away...now if either of these transfers look they were dipped in midnight berry kool aid there,s gonna be hell to pay

is midnight berry a real flavor? prolly not...sounds good though

Tommy: You know what is a real berry? Loganberry, a hybrid of blackberries and raspberries. Fucking delicious in pie, too. (Insert your own "You're eating Wolverine's balls!" joke here.)

I'm sure whatever copies have resurfaced were the result of some brilliant fucktards ordering 10 copies, and then having their cat order 10 MORE copies and have them shipped to the same address. Or people who ordered with maxed out credit cards, people who put in 2 separate orders by mistake, stuff like that. Inevitable in situations where you only have a tiny window to place orders, and I'm sure whatever "leftover" copies have slowly made their way back into the sales pool are gone just as quickly.

One guy says he claimed to have ordered 244 copies by mistake (probably playing the "Cart Game" and pulled the trigger by mistake). Not sure how that's even possible, what with the supposed 10/2 limits already in place, but barring any further major shenanigans, it's safe to say that CHRISTINE is long gone in one day or less.

Well I'm just glad we both got our copies...now lets hope we don't get fucked

I'm sure the additional orders are going to sell out just as quickly if not quicker as people are now more aware that it can sell out in a day. The reprieve doesn't really change the outcome with new data. The NOTLD returns sold out almost instantly as well.

Kentai I too first felt that Fright Night's rate of sales was tough but fair. But now that we've seen more into the new market and seen more into the economy in general it's clear this method is not satisfactory for notable titles.

My hope is that Sony are the ones who realize they could make more money doing something else, maybe like Warner Archives has begun with Death Trap on Blu-ray. The delay on The Blob may just hold TT off just long enough for Sony to reconsider their options.