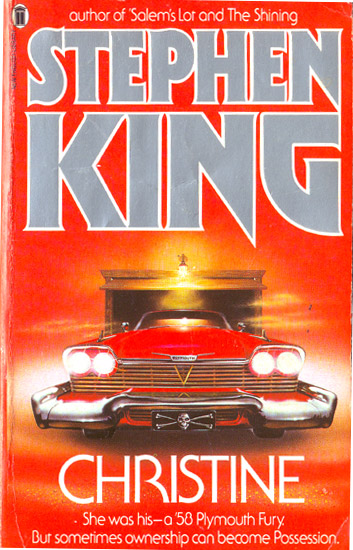 There's only so many one-sheets for this one...

Just a quick reminder to anyone who might have missed out the first time; March 8th, 4PM Eastern, Twilight Time/Screen Archives Entertainment will be doing two things:

1) Re-listing CHRISTINE as a standard $29.99 title and limited to one per customer, based on order cancellations from the initial sell-out. though I can't imagine there will be more than a handful of copies available. Odds are this window will be less 7 hours, more 7 minutes.

2) Offering 100 copies of Christine, signed by star Kieth Gordon. You have to order $100 or more worth of any Twilight Time titles and then put in a note like "I'd like a signed copy of CHRISTINE. Y' bastards." And if you're one of the first 100, you get it. Not sure if you can back out if you don't get it, though...

Aaaaaand I'm done talking about this movie until I have a chance to open my copy and actually, like... look at it.
at 8:49 PM

I watched mine last night. PQ was a huge relief after the whole NOTLD ordeal. I thought it looked quite good...the picture has always been quite dark and it doesn't look like they have done anything to artificially brighten it. Some of the outdoor night scenes are extremely dark...some might complain. Grain is intact and natural...fine detail and colors look good too. It's no show stopper but I'm happy. We'll see what you have to say though, Mr. kentai!

The massive server crush screwed me. I clicked on "add to cart" at literally about 20 seconds after 4pm. The page failed to load, which resulted in a copy failing to alot to my shopping cart. I've got a screenshot of the page still trying to load the shopping cart after I clicked "add to cart."

The blu ray is excellent and accurate. I saw "Christine" a couple of times when it first came out. Some will complain that there is black crush happening on the blu ray, but this is the way "Christine" has always looked.

Tommy: Sounds pretty similar to FRIGHT NIGHT, then - nothing too out of the ordinary, just a modern, filmic transfer which is basically the norm from Sony. Honestly, if it weren't for the color timing fiasco I'd have had plenty nice to say about NOTLD...

Anamorphic 35mm films from the 80s often have a certain soft, subdued look. I half-expect I know what this transfer is going to deliver, but I'll keep my mouth shut until I've had a chance to look it over with my own eyes.

Of course, another release arrived on my doorstop today which might push any CHRISTINE review back, just slightly...

FJO: Sorry to hear you couldn't fight the throngs, but if you just wanted this as a curiosity I suppose it's no big loss. The movie is readily available on other formats, after all.

Anon: Based on all the positive buzz and screenshots that are floating around, I expect this to be a gorgeous, accurate representation of Carpenter and Cudney at their peak. I'm glad to hear it meets both your memories and expectations.

I love the Christine Blu-ray. Honestly, it makes me appreciate the movie so much more because Carpenter, of course, really made some beautiful-looking films with those anamorphic lenses.