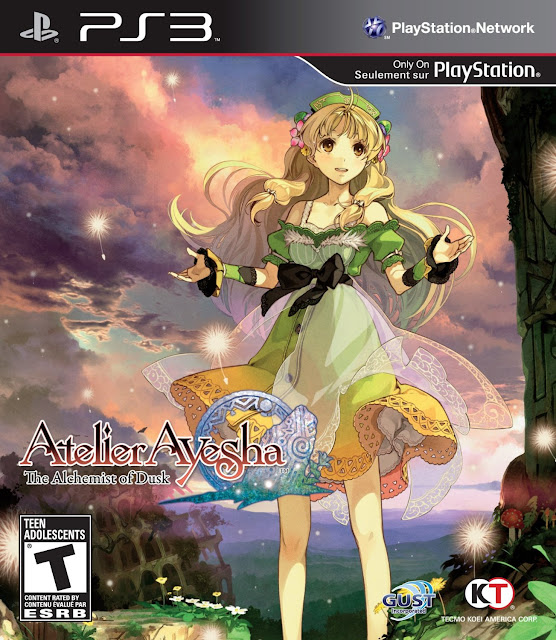 Just a fair warning to everybody who likes these elegant little fluff games about smacking wolves in the taint with enchanted staffs and collecting scattered woodland ingredients to Alchemy up pies. Mrs. Kentai really loved the last game in the series, so I was ready to pull the trigger on this one to keep the good times a' flowin... but two unexpected things kept me from sealing the deal.

NIS America is no longer the US distributor due, as I understand it, to Tecmo-Koei having purchased GUST outright back in Japan. Lost in the shuffle were both the extravagant artbook Limited Edition, and the original Japanese voice track. The former was a great incentive, but at the end of the day I can live without it. The latter, however, is the line for me; even if you're more forgiving of this omission on principle than I am, the fact that what we're getting is being described as a "Partial English Dub" smacks of penny-pinching, the major side effects of which could have easily been avoided by doing quite literally what they've done for every single other iteration in this franchise and include the original language track.

Plenty of games are only available dubbed into English and other anglicized languages made from that. I've grown accustomed and expectant of it for franchises like Final Fantasy and Metal Gear. But you know what they didn't do? Dub the "big" cut scenes and then remove dialog from the rest of the game.

Apparently Tecmo Koei is already talking about restoring the Japanese audio for the next game in the franchise. Maybe we'll see this as free DLC or something down the line? These games are closer to visual novels than most "big" AAA titles, and as such programming mouth flaps is a non issue (at least if the last game was any indicator).
at 10:06 PM