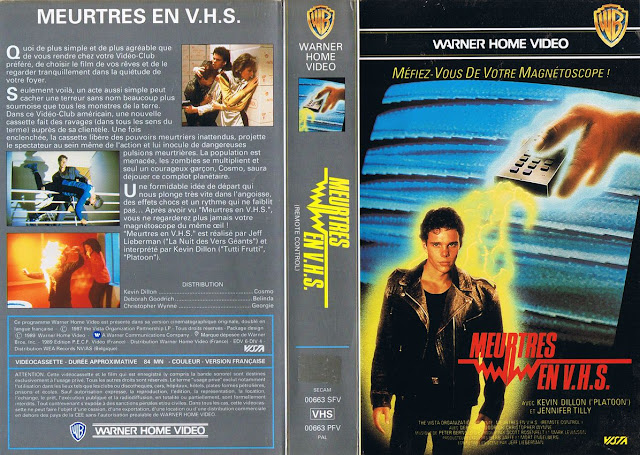 Jeff Lieberman's largely unavailable 1988 horror-satire about the dangers of (what now seemed inevitable) pop-cultural brainwashing, REMOTE CONTROL, is now available on DVD and Blu-ray HERE direct from the film maker. They're both restored from a new 2K master, each copy is hand-signed and numbered by writer/director Lieberman, they've pressed a thousang copies per format, and there's a limit of 2 copies per customer - in other words, it's basically Twilight Time plus Albert Pyun, but without the scalping and SD masters, respectively. Interesting.

There's a lot of crap coming out right now that I want to get my hands on first, but I hope this'll be around for another few weeks so I can put in an order... never even heard of this damn flick, to be honest. 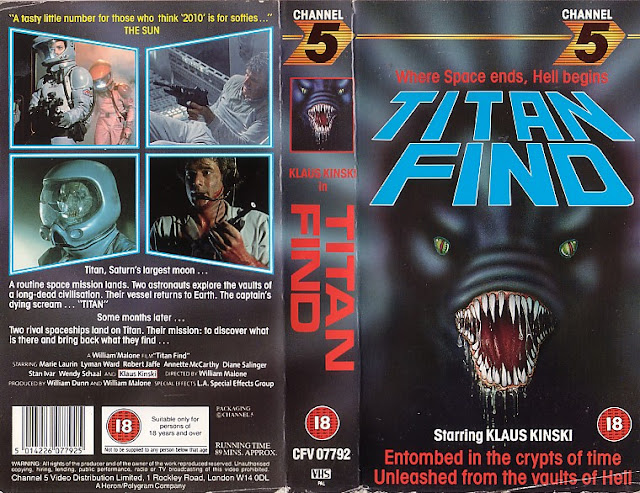 In other, perhaps even more bizarre news, the Los Angeles based Dark Delicacies bookstore sold a handful of copies of William Malone's 1985 creature feature THE TITAN FIND, better known as CREATURE in much of the world. It's not one bit unfair to call this an Alien knock-off, but at least by all counts it's one of the better knock-offs of the period, and stars Wendy Schall and Klaus Kinski. Malone tracked down the uncut master positive and created a new 2K master from it, and was in the midsts of releasing it himself on DVD... but after a handful of copies were sold at Dark Delicacies, a signing was canceled and the store - perhaps inadvertently - that Malone had signed a deal with a distributor who was interested in a wide DVD and Blu-ray release. All eyes are currently on Synapse Films waiting for the other boot to drop, though as of this moment no official word on who exactly now owns distribution rights has been made... odds are almost overwhelmingly in Synapse's favor here, though.

I think I saw the final reel or so of this on the Sci-Fi channel years ago around two in the morning, right before they'd give up and play Infomercials 'till dawn. I'd love to revisit this, just to see if it's half as good as I remembered it (or if it's even the same damn thing).


For the record, I've been to Dark Delicacies a few times. Cool little place that does autograph signings every week, and I was lucky enough to get Bill Mosley to put his signature on something for me not too long ago because of it. I've bought a handful of posters from them too, and the prices were better than I typically see on eBay. Good people there. Hopefully they'll hold another event in the near future and have Malone sign some damn Blu-rays instead.
at 6:46 PM

Ordered! I vaguely remember happening upon this back in the days when "satellite television" meant you had an eight foot dish cluttering up your front yard. Only caught a few minutes, but what was there was absolutely bizarre...

Couldn't believe my eyes when I saw the announcement for remote conrol! I've been looking to track down a bootleg of this one for quite a while now, but the last thing I ever expected was a blu ray announcement from the man himself! The price is steep for sure but I had to get in my order right away. Spoke with Lieberman on facebook and he said he is considering doing the same for Blue Sunshine if this release does well! If that pulls through as well as the the ambiguous-at-best Code Red announcement for the Just Before Dawn BD, we would have all 4 classic Lieberman titles on blu ray! Now that would be a truly unexpected treat!

That's right, SQUIRM is coming out sometime later in the year through Arrow Video - I'd completely forgotten about that!

As for what's going on with CODE RED, I wouldn't get too excited for them to embrace Blu-ray. For one thing, releasing a title that virtually nobody's ever heard of as a first title is a dumb move, and for another the numbers that I know for a fact Code Red tends to operate in do not particularly lend themselves to the substantially higher overhead of doing a limited Blu-ray run.

Still, if Code Red releases something I'll happily pick up a copy, just to see what happens with it. As I hear it they've been doing HD masters for a while now, so if they're serious they could go back to whatever titles sold well to begin with, if nothing else.

Also, does anyone know what the heck's included on the second disc of Code Red's BEYOND THE DOOR? I assume the 'Grindhouse Version' is a straight up scan of a butt ugly American print, but I've yet to find anyone to even mention that the 2-disc version even exists.

Just got my copy of the Remote Control Blu-ray in (17/1000) and am quite pleased. Audio is only DD, but the video transfer and encode (AVC at an average of 31.9 Mbps) are both very nice. I'll try to have a proper review up later this week.