Rock Out The Dragon

While Ubisoft inexplicably insists that FAR CRY 3: BLOOD DRAGON is an official "Expansion" of their Triple-A Desert Island Tiger Fueled Sandbox styled adventure franchise, the facts are finally in: It is indeed a stand alone download-only game built on the groundwork of the original Far Cry 3, those who have already gotten a chance to play through the entire game (due to a hilarious - and now, quite closed - XBLA release glitch!) says it takes a brisk 8 hours or so to do everything, and will be available for purchase on both XBLA/PSN platforms on April 31st for a mere $14.99. As a point of reference, the last time I played an 8 hour game I loved was Lollipip Chainsaw, and as I dropped sixty bones for the privilege, this seems like a bargain.

As an added treat for those of you with a boner for shooting things on computers that weren't pre-made by Sony or Microsoft, Steam already has the PC version up for pre-order, and is including a full download of the Power Glove OST I've been violently masturbating to for about a week as a free bonus! Needless to say, I whipped out my Visa like it was the last circle jerk before The Big One. If anyone reading this has Steam installed and has even the remotest interest in what you see up there, I suggest you do the same before the OST deal drops off in two weeks.


This has forced me to ruminate, if only (semi-)briefly, on how I feel about "download only" copies of games in general. You surely remember that I hesitated to pull the trigger on Fist of the North Star: Ken's Rage 2 for a wide variety of reasons when the game was released in February, and while I'm a little sad that it's been a couple months and I still don't have the game... well, I still think my hesitation was somewhat justified. The game was too large (space wise), too substantial, and simply too expensive to be justified as a download-only PS3 title for the full $60 MSRP. I get that video games are a luxury item, and that a full fledged AAA title - of which the Hokuto Musou sequel is, arguably, at least an AA "expansion pack and then some" affair - costs $60 because of the development costs and all that. If I had bought the damn game on a disc for $60, I wouldn't have batted an eye, so who does making this one a download-only title bother me on such an oddly personal level? 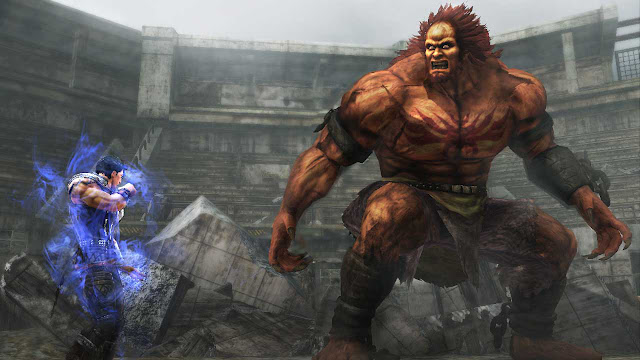 Yeah, it was dumb, but I still liked the Jackal/Devil Rebirth arc.
Wait, the GOLAN arc is in there, too?! Goddamn you Tecmo-Koei...

I understand well enough that offering the game on a disc versus as a download is offering literally the same content - the data's identical between both formats. You're paying for the same game, so obviously the price should be similar, and that's fine. But cutting out the physical media production, skipping the wholesale discount given to Game Stop and the like, means the publisher is pocketing more money to start with, and in turn is removing the option to ever lend or even, Gods forbid, resell my personal copy has been removed - and it's also hogging up additional space on my less than bottomless PS3 HDD, which only gets more pathetic for Xbox 360 users who (as far as I know, at least) have to buy an MS Branded drive should theirs reach critical mass, and are forced to snap open their system with a goddamn hammer if they want to replace it on the newer models. In short, Download versions cost the same as the Disc versions, but come at no real advantage to myself, other than dodging about $5 in taxes and not having to wait in like at Best Buy for like five minutes. Were they a bit more competitively priced - say, $50 instead of $60, or they cost the same but included the first wave of DLC, or anything like that - I'd probably be more okay with the whole idea, even if I'd avoid it personally.

That's not to say I don't buy download-only games. Blood Dragon is a great bargain, and I'd pay $15 for that on the PS3, if that seemed like the better option. I have no problem with the whole "Virtual Console" concept, where you're paying $10 for a game that's been out of print for 15 years, merely saving the headache of ordering a copy off of eBay only to find it so scuffed up it won't boot to begin with. I'm also going to pick up the Black Rock Shooter PSP game for $20, because A) the price is less than the going MSRP for a typical packaged PSP game - which essentially, doesn't exist anymore, and B) it's a kooky Action-RPG based loosely on a memetic NicoNico Douga music video. This was never going to get a wide US release because it wasn't made to appeal to Western sensibilities to begin with.

Had this been a $30 packaged release, I'd be fine with it, but a $20 download is perfectly acceptable with all of that in mind. I'd have loved to see the utterly insane Premium Edition released in the states, but sadly, I still live on Earth where I still have a substantially better chance of walking outside and randomly being attacked by Olivia Wylde who, for reasons therapists would later go on to describe as the "Kentai Syndrome", threatens to slit her own throat with a hacksaw unless she's allowed to repeatedly suck Spaghetti-O's out of my anus. Seriously, every word of that had a way better chance than anyone in North America packing the White Rock Shooter in a premium translated release, despite the fact that those insanely cool/ridiculously overpriced toys are literally the only reason most of those games exist to begin with! 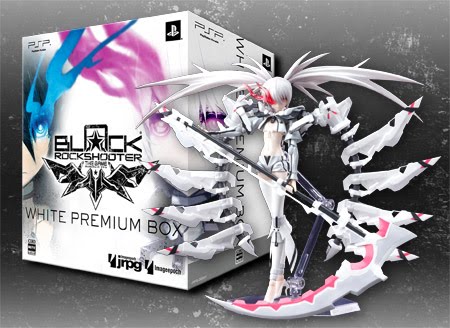 Let's see you do THAT with DLC, Sony!

Hell, I'm still not convinced I shouldn't have picked up Hokuto Musou 2 for $60 as a sign of good faith... and then I realized that a $60 download game has over $50 worth of DLC. I was so shocked I had to itemize that shit: $23 on costumes, $18 on unlockable characters, $8 on bonus maps, $3 pack of "upgrade"scrolls, and $3 on a pallet-swap of the "Pre-Order Bonus" DLC costume. If playing the entire experience front to pack cost a hundred bucks, the least you can do is give me a fucking disc to give away should I get bored with it. And, yes, part of the rub here is that Sony is kind of a dick about what does and doesn't qualify as something "worth" releasing on disc, but it still sucks. 360 owners can, I admit, purchase a physical copy, but just wait until we see how true the rumors of the Xbox Durango turn out... that'll be the end of physical copies even mattering for game consoles. (But we'll talk about that if, and when, we have to.)

So, what about downloading PC games that are, by and large, identical to their console equivalents? Well, I feel slightly differently about that, too, mostly because Steam has been a fantastically intuitive service that runs sales that make any semblance of having a valid complaint instantly moot. The fact that I have a 3TB HDD - and smaller drives to spare! - is an added incentive to not give a fuck is my copy is physical or just a few bytes of data on my Steam profile. But there's a fundamental difference between playing on a console and playing on a PC: When you buy PC game discs these days, they're more often than not essentially a glorified Steam installer anyway; simply put, I've been more willing to support download only games on a PC platform more than I have the PS3 because it makes a heck of a lot more sense when the actual disc is irrelevant to playback anyway. If you want to play whatever, fuck it, Bioshock Infinite on the PS3, you can play the game from the disc with only a bare minimal installation to make the auto-saves work properly; if you want to play it on the PC you're going to install the whole fucking game anyway, making the disc little more than a glorified serial number caddy. The formats are inherently different enough that I can accept it as the norm on one and not the other, even if - broadly speaking - it's the same experience for the same price.


I'm clearly thinking about games too goddamn much these days. Not sure why. Anyway, go throw dollar bills at Ubisoft like some sort of 80s satire fueled stripper. I feel good knowing I have, and seeing people on forums who beat the game when it was accidentally released in the wild say they're still willing to buy a copy solely on principle warms the cockles of my black, shriveled heart.
at 9:28 PM