Just a week ago, I gave Scream Factory's Phantasm II SE Blu-ray a sound cock-lashing. To be fair, however, Shout Factory kinda' deserved it; that HD master is older than some of you probably reading this, and while I applaud them for creating a mountain of relevant bonus features, a crappy transfer is still a crappy transfer.

Was it actually upscaled? No, I'll give the devil his due and say that, while horrifically crumby, it was indeed an HD master, one that Universal must have minted at least a decade ago. Between the massive pasty DVNR and the total lack of anything resembling focus or image stablility, it may as well have been a DVD with lossless audio. 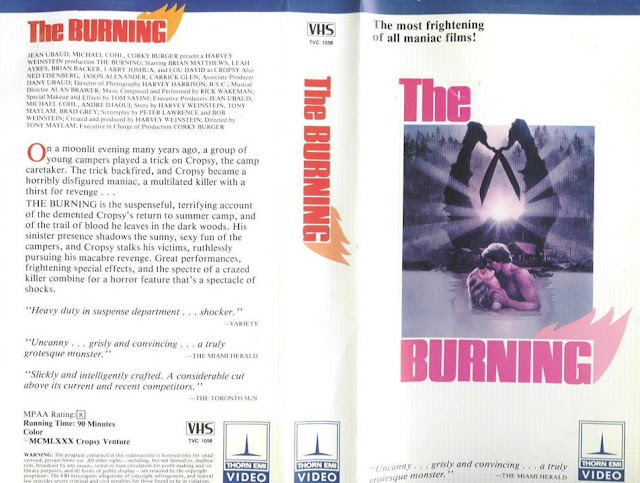 Because this is probably the only key art left I haven't thrown up yet.

That said, I am a reasonable man, and reasonable men pre-order the shit out of discs when the caps don't look terrible. THE BURNING is making the review circuit as we speak, with both HIGH DEF DIGEST and BLU-RAY.COM posting very enticing 1080p samples. I've thrown my $20 at Scream Factory for he privelage, and having spent more than that to see a vintage 35mm UK print at a local theater last October (which was promised "uncut" but was still missing two shots of the Raft Murder... *grumble-grumble*), I have no doubt that the quality of the BD presentation is going to be the best viewing I've ever had.

Scream Factory has done plenty of decent to fine work with HALLOWEEN III and FROM BEYOND. By all counts, they've done an equally great job with films that even they probably didn't care too much about (DEATH VALLEY says "hey"). When I say Phantasm II sucks monkey shit, I'm not doing it to troll or because I want unwashed neckbeards to call me one. It's because it actually sucks. It's entirely possible to hate a particular release from a label that happens to release the titles you want and still not hold a grudge or vendetta against them for everything else. As if I had enough energy left to start another holy war after burying what was left of Media Blaster's credibility... *ahem!*

Fun Fact: This should surprise no one, but just so we're clear, I don't get free shit. I don't even make money on Amazon links, or web traffic, or... anything. When I write about a disc, it's me wasting my own free time I could be spending playing video games or having sex with my wife or eating something covered in chocolate or, whatever, with no tangible reward. I do it because I care. Or I care enough to bitch about it. Whatever dude, you decide what to make of my own sense of self-worth.

The point is most people who say "This looks fantastic!" are, directly or not, getting freebies and/or kick-backs to do it. That doesn't make them bad people or their opinions invalid, but it does put pressure on them to look on the brighter side of things, particularly when we're talking about a relationship where one shitty review can screw them out of every concurrent title from that same studio. I'm not trying to get all high and mighty with what I do when I make poop jokes over an old HDCAM master, or suggest that home video review is a sham or anything overtly nefarious here - I just want there to be a little context into why I can sit here and bitch about a title looking "meh" and focusing on what went wrong - or more importantly, why it went wrong - even when the consensus might be that the disc is decent, if not perfect. I'm not paid to look on the bright side because, frankly, I'm not paid at all.

So, before anyone else decides they need to call me a dick-punch for... I dunno, having moderately high standards, I guess? The fact is I actually like Scream Factory. I think they usually do a fine job with the titles they pick up, and I'm legitimately excited that they're giving obscure and, at times, downright forgotten films their restored High Definition due, even if I don't want the majority of them personally. Their compression isn't the best in the industry, I admit, but it's not terrible either - Severin's current MPEG2 output is notably worse, as is pretty much anything 1080i Sentai's crapping out. The real problem is when they're handed a crappy master, they release a crappy product, because they don't see the need to make a new one from scratch - not when you can boost color and remove scratches for a fraction of the price, anyway!

It's sad that they won't pay to make a new transfer when the materials are actually that bad, but... well, what the fuck else are we going to expect? I'm sure the biggest Scream Factory titles hasn't sold more than a couple thousand copies on Blu-ray and DVD combined, and if the people who actually love Phantasm II are happy with the shitty transfer we saw, clearly the core demographic will take anything over nothing at all. I get it. It's sad, but that's exactly where the market is right now.

Oh, while we're on the subject of Scream Factory and it's sliding scale of greatness, SWAMP THING is coming soon and it's going to be the less tit-filled "Wes Craven Approved" USA Version, not the extended European version. I'd probably be more upset if... well y'know, if it wasn't fucking Wes Craven's Swamp Thing movie, a flick that's only particularly notable for the failed revival of the tie-in comics having led whackadoo Alan Moore to dump his unfiltered creativity in what DC saw as a corpse floating in the water, revitalizing the entire industry purely by accident. It was also the book that Rick Vetich got his ass fired for, and in a fit or rage he published The Brat Pack on his own, just to spite DC. You should really read that, world. Brat Pack is fuck'n awesome. 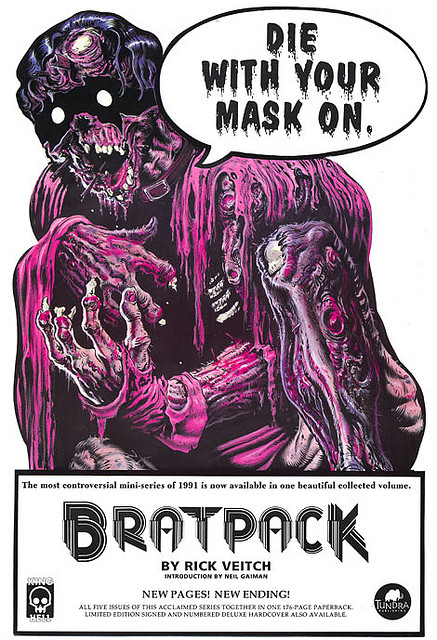 Where the fuck is this movie, Hollywood superhero machine?


Still, if jiggly bits are a deal breaker, save your money. If nothing else the footage should be included as a bonus feature, but I'm sure they're trying to keep that "PG" rating on the box without needing to plaster a bunch of "BONUS FEATURES CONTAIN UNRATED MATERIAL!!" boxes every which way. Arrow Video's also got this on tap, but there's so far no word on if they'll include all the mammaries either.

EDIT [5/17]: Dang! I've been informed by Arrow Video that they do not currently own the rights to SWAMP THING, which I can only chalk up to having mentally folded Shout's Factory's announcement into Arrow's own recent massive title list - sorry for that, guys! And, while I've got that on my mind, wow, I excited to see DERANGED uncut on BD!

Also, NINJA III: THE DOMINATION. Yeah. There's really nothing more to add, except holy shit, Ninja 3? On Blu-ray? In North America!? Sweet. Now, why the other two Sho Kosugi Ninja flicks - not to mention the goddamn BREAKIN' movies! - are currently only available on BD in Germany, I couldn't even begin to tell you.

But whatever. The Burning. The Mother Fucking BURNING comes out next week. Put your pre-orders in now, and pick up whatever Scream Factory titles you've been putting off up until now... odds are that's as good as that flick's ever going to get, regardless of which end of the spectrum that disc is on.
at 4:45 AM

I love Brat Pack. Got a pretty big woodie for Rick Veitch in general. His TMNT The River trilogy is excellent, as is The One. Just picked up Maximortal so I'm excited to plunge into that (even if folks are saying it's not as good as some of his earlier stuff).