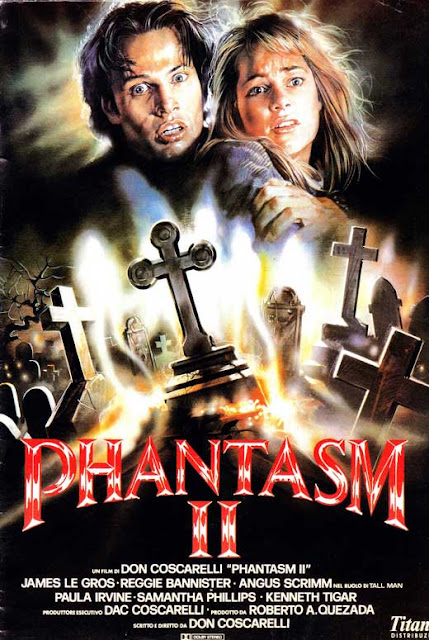 A couple weeks ago, I had some pretty unkind things to say about the Caps-A-Holic PHANTASM II Comparison, which left many people to wonder - myself included - if the fuzzy Scream Factory Blu-ray might have merely been a worked-over upscale of the older Anchor Bay UK master. As is my policy, I try not to assume the worst... but Shout Factory's releasing a massive number of Jackie Chan titles pulled from the same Digibeta upscales that have seen the rounds in Hong Kong, and I tend to get much less trusting when that shit starts to look even remotely acceptable.

Curious, I got a hold of the disc myself, and had many things to say... but the list is basically "Wow, this really sucks!", with one of my main complaints being a seriously nasty case of waxy DVNR. And in my defense, everything I saw with my own two eyes - the ultimate test, according to anyone who distrusts screenshots - was horrid.

It also, incidentally, involved reinstalling video card drivers. The short version of where this is going is the current version of the drivers I need to power the hardware I've still got had different default settings between the previous and current installs I'd made. The result? Well, Blu-ray playback used my GPU - which is normal, and preferable for most applications. Most of the time I take screenshots using an AVISynth script reading a DGA file, so the Media Player Classic Home Cinema decode I use to watch movies never really enters into it. But, of course, the one day I look at something and decide to call it a puddle of piss, I'm not using AVISynth, mostly because I don't have my old filters back yet... you see where this is going?

Short version: My initial reaction to Scream Factory's PHANTASM II Blu-ray was one based on a heavily filtered playback due to some shenanigans going on behind the scenes of my video card. It was a dumb mistake, one I'm not liable to repeat again now that my install seems nice and stable, and it made me dump a ration of shit on a disc that didn't entirely deserve it. With that in mind, I can only offer Scream Factory, Cliff MacMillan, and anyone who actually cares what I have to say a sheepish apology...

...or, I can talk about the disc again! Think of it as a Restored Review, mastered in 2K from the original hand-scribbled notes I keep next to my monitor. It's not, but it's probably more fun if you assume it is.

Without going into full speed ahead review mode - I've got a dinner date with the wife, and I've already half-written a proper write-up on another disc from these guys I hope to post before the long weekend is over - the Shout Factory BD is "mostly okay". It's probably ten times nicer than what I saw the first time I popped this sucker into my computer, in any event. The image typically has a fairly neutral coating of grain that's adequately resolved, but Caps-A-Holic's comparison still shows that the leap from PAL's limited 576p to 1080p isn't nearly as great as I'd expect for a well-shot feature film from a director with more than a little experience. The color grading also still leans towards a ruddy, contrasty hue that doesn't look particularly natural, though it does paint many of the outdoor scenes in a faux-sunset look that I could easily see Coscarelli finding appealing, and turning off that Auto Contrast bullshit helped skin from looking like it was always ready to burst into flames (as opposed to doing that only where appropriate). It's fair to assume that what we're seeing is a slightly tweaked Universal catalog transfer from the better half of a decade ago, and while it's really no great shakes, I'd have been far less willing to assume Shout Factory was hustling me with an upscale if I'd seen the original transfer unmolested to start with. Mea culpa on that one, Shout Factory. If nothing else, this still looks quite a bit better than Image's fuzzy release RE-ANIMATOR or the sludgy DVNR nightmare that was THE WIZARD OF GORE.

That said... it's still a pretty "whatever" presentation, transfer wise. It's not bad, it's just not particularly good either. The blacks look crushed and gamma is weak, meaning the multitude of dark scenes are basically black holes with characters struggling to creep out of a dark pit of nothing. The print itself also judders around like the optical printer smoked a fat bag of crack before doing its thing, and is likely the result of a less than ideal 35mm source print getting a real-time HD telecine, which doesn't really having anything in the way of print stabilization. Mild trailing from (thankfully subtle) DVNR likely dating back to the master's creation hit a number of the brighter scenes, and try as I might, I still can't figure out what the hell that dancing digital static just below the 1.85:1 matte bar is supposed to b. All of this sounds like niggling, and it is really, but when all you can do is niggle about this being "eh" and that being "meh" and the other thing being "not terrible", what you're looking at is a mediocre transfer.

Look, let's be honest for a second here: Do I honestly think PHANTASM II is ever going to look better? Sadly, no. I honestly think it could look pretty impressive if Shout Factory had gone back to the 35mm OCN and done a proper 2K scan, getting those dark scenes graded properly and removing the constant tittering on what should clearly be more or less static shots, but it just isn't going to happen in this marketplace. Shout Factory got what they got, shrugged, did as much clean-up work as they could do without investing in a new scan and moved on to the next title. If you like this movie, the 35mm sourced workprint footage alone is worth the $20 it's selling for. If you're on the fence and want a strong transfer to sell you on the upgrade... I dunno' what to say. The disc is what it is, and while Shout Factory can - and has - done much better work, it isn't as bad as I'd initially feared.

There we go, I feel much better. Let's meet back here in a couple days and talk about another Scream Factory Collector's Edition, yeah?
at 11:15 PM

Never really thought about it, but there's been times when we get early screenshots of transfers like Horror of Dracula that raise all kinds of internet hell but then it gets a mass release and we have other screen shots to contradict the early ones. It's not even a question of having your VLC settings right anymore but video card settings and other considerations perhaps.

Also with reboots of transfers like for Re-Animator going on one can't lightly state that "it'll never be done better," especially with 4k down the road. Even Ghostbusters has shown that new handling of the same scan can be a marked improvement.

Still I'd consider Phantasm II to be "good enough." At the very least it's unlikely Shout Factory's extras will be with a bigger better transfer. The next resolution is always on the horizon but unique extras will still maintain some value.