Fighting On in the Pacific Rim 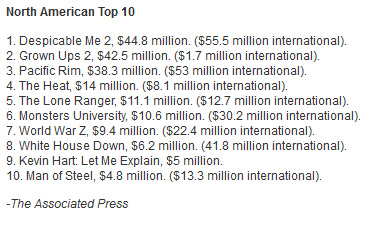 Y'know what? Fuck you all.

I'm trying not to get too excited about this whole thing, seeing as how Guillermo del Toro's PACIFIC RIM was tailor made for international audiences and will - I'm sure - by this weekend's close have made a small fortune in China alone. The universality of the kaiju threat and the total lack of genuine political angle is one of the many unusual, praise-worthy things this film has brought to the Imax screen, but in the end it still got its ass kicked by a fucking Adam Sandler sequel.

In no uncertain terms, Pacific Rim is a glorious success: A thoroughly unpretentious, gloriously realized tale of giant monsters getting punched in the goddamn face by equally giant robots. The film's simplified borderline ethnic stereotype cartoon heroes are about as deep as a finger bowl, sure, but they're fleshed out enough that we care about their personal struggle, if not them as actual people - and you'll cease to care that we're watching rejected Street Fighter II characters the minute they get into a deliciously convoluted clunker of a 90 foot robot and fight critters that look like Cthulhu and the Hellboy cast got their extended family freak on. It's a bold, bombastic, family-friendly fantasy that's fallen out of style in the wake of depressing superhero movies as the go-to popcorn fodder, and it finally proves that you CAN make a legitimately great giant-robot driven live action film, meaning that Michael Bay can finally put down his Transformers Proof of Concept franchise down before it wipes its ass with Unicron and officially pisses everyone over the age of 30 off into a blind, frothing rage, and we can all finally stop pretending that Robot Jox is anything but Stuart Gordon having a great time with some particularly cool 80s action figures. (And there's no shame in loving that, damn it!) 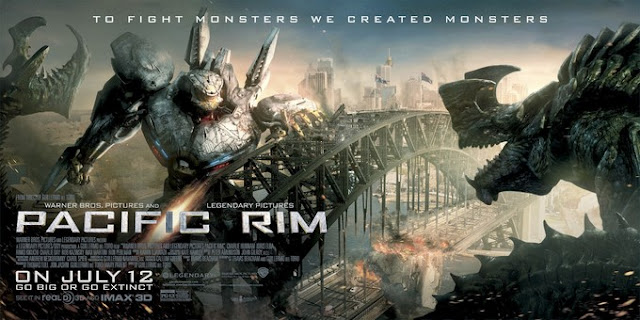 And hey, holy shit, Pacific Rim is an original property - a logical, sincere next step created by a childhood fueled by Godzilla movies, and legitimately classic mecha anime like Tetsujin #28 - and not, contrary to much gnashing at early trailers, a wholesale Evangelion rip-off... if anything it owes far more to Gunbuster and Mazinger Z. It isn't a hipster mockery of their tropes and ideals, it merely is an obnoxiously awesome film full of the deceptively simplistic, conceptually gonzo childish wish-fulillment power fantasy Go Nagai, Ken Ishikawa and Mitsuteru Yokoyama made their legacies out of. Del Toro promised to create a film that would have blown his own mind were he still a 12 year old boy, and by God, he's done himself proud on that front. I wouldn't go as far as saying Pacific Rim is a perfect film - that'd be giving it just a little too much credit - but it is a perfectly realized look at what the boundless talent and budgets of the Hollywood blockbuster machine can turn these simple, kooky ideas into when it has the balls to not try and craft an ironic parody or a gritty reboot of the material; sometimes, fun is just fun, and Pacific Rim delivers everything I could have ever asked from it.

And yet, here we are watching it get a lukewarm reaction in the United States. Oh, don't get me wrong, reviews are quite positive - it's got a healthy 72% Fresh rating and an even higher viewer score, which is about as good as a movie that's best summed up as "Mighty Fighty Robot Action!" is ever going to get with the public at large - and Warner Bros. has already said they expected it to open stateside with a $30 Million weekend gross, which means it's already ahead of "official" predictions.  Warner is either downplaying matters a bit, or expecting huge international returns, since the film's estimated $190 Million cost - which, remember, includes neither the marketing budget nor the fact that ticket sales are split with the theater - are, as of this writing, still not yet met (though the gap will surely be closed by Monday morning).

To draw an infuriating comparison, TRANSFORMERS: REVENGE OF THE FALLEN - a film even people who are willing to defend Michael Bay's other Transformer movies tend to admit is a pile of shit - made more money in 24 hours than Pacific Rim will have made on US receipts in two weeks. Yes, by and large Nerd Culture has slowly usurped the "mainstream" in the early 21st century, and that's pretty damned awesome in a lot of ways, but it's become clear that only certain parts of Nerdy Stuff actually ever took; in this case, the presence of giant robots punching other equally giant things seems to have less draw than the nostalgic title and the promise of your own fond memories of a toy truck that turns into a toy robot, with the actual "good movie" part being fully optional for commercial success. Similarly, GAME OF THRONES - or more specifically its love for tits and beheadings, on top of all that "high fantasy" nonsense - has taken cable by storm, but if you can somehow convince anyone who isn't already a huge manga fan to give even a half a shit about BERSERK, please, let me know.

But this is to be expected, to some degree at least. Known properties always do better thanks to the concept of "Marquee Value" - the idea that people are more willing to spend money on something they've already seen in some form before, which explains why sequels always do better than the first part in a series, despite most sequels being not-really-as-good. So no, Pacific Rim isn't a failure as a lot of the Hollywood rags are reporting... it just isn't doing as well as it deserves to. And that's a wholly different kind of disappointment, isn't it.


I could write 10 pages explaining why PACIFIC RIM is awesome, but... why bother? Go watch the trailer. Know you're getting exactly that for just over 2 hours, and do yourself a favor and find the biggest fucking screen you can find - 3D be damned, I wouldn't have it on anything but a 50 foot tall IMAX screen. Already seen it? Grab a friend who hasn't and go again. Hell, ask a person on the street to a date and take them; if they aren't ready to bone you 'till they bleed after 2 hours of hot mecha action, you've clearly wasted your time. Go see Pacific Rim, go see it all the times you possibly can. I mean, fuck, it's either that or wait for The Smurfs 2 inexplicably set new box office records... and you really want THAT on your conscious?
at 1:54 AM

Glad to see the international money gave it a healthy weekend boost, and there's still the August 9th opening in Japan, where hopefully a full month of buzz will get the otaku and normals alike into seats.

Pacific Rim was well worth the Imax (and even the 3D).

I am sort of disappointed Del Toro didn't take a leaf from Gunbuster's book, and use Gipsy Danger's explicitly mentioned double-reactors to re-enact the tear-out-your-own-heart scene. I guess he wanted to stave off having to come up with some extremely contrived explanation (LOLanalogue) of why they need to keep an ancient robot around some more, in case somebody threw a bunch of money at him for a sequel.

And though it certainly was the polar opposite of Evangelion in terms of theme, it did have a few stylistic nods. Especially the "The robot is going beserk!" "Deactivate it!" "It's not accepting the command!" "Yank out the big honking plug!" scene. Though the basic raw premise of group-of-countires-build-individual-giant-bobots-to-fight-monsters-and-then-they-come-together-to-one-base-and-the-conventional-military-don't-approve etc is slightly similar. I'm wondering if Travis Beacham's script was inspired by a rewrite of a rewrite of a rewrite of ADVs mythical Evangelion live-action script crossing his desk after going through edits to remove the child pilots, mysticism, psychobabble, and monster origins.

Saw it. Love it. Agree with your analysis--the film simply is what it is.

I think the opening weekend dollars don't mean squat. I predict this film is going to have longevity measured in years, possibly decades in terms of rewatchability, rentals, streaming and sales. My pre-teen kids have rewatched KING KONG vs GODZILLA countless times, and I'm betting PACIFIC RIM can have that sort of lifespan. GdT will be probably paying his nursing home bills from the residuals.

Spot on Kentai, but I wanted to add something as by your "50 foot tall IMAX screen" statement shows you may not already know that true IMAX is a 76 x 98 feet. Much like GINO we have "IMAX in Name Only." The newly constructed IMAX screens are 28 x 58. I have to drive past several "IMAX" screens to get to the true original ones around me.

I've shared some of my own experience with the different IMAX screens here: http://thexhuman.blogspot.com/2012/05/avengers-imax-3d-experience-2012.html