REGULAR SHOW is a great little cartoon series, and is - oddly enough - the closest thing to a successor to Beavis & Butthead I've seen in the 21st century. No, not in the laughing at dick-puns sense, but in that the real draw of the show is watching this world-weary friendship between a pair of socially awkward nerds who have been together for so damn long they're not even sure why they became friends, but they're close enough at this point that they aren't willing to part ways.

While Mordecai and Rigby's begrudged friendship are the show's most valuable asset, the show is better known for its high levels of 80s nostalgia and bizarre, probably inappropriate for children sense of humor that focuses on everything from unicorn bodily fluids to scenes of the show's two heroes getting just drunk enough to order incredibly dumb things on the internet. It's also chock full of thinly veiled references to films by Stanley Kubrick and Dario Argento, like so: 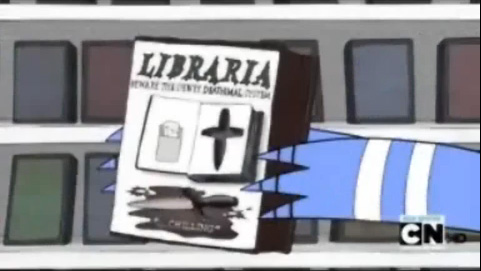 With all of that in mind, and the fact that Cartoon Network is backing a show that may as well be this decade's iteration of Rocko's Modern Life, it's not all that shocking that the show's oddly naturalistic focus on dialog and bullshitting with friends would, occasionally, lead to language that - while not outright South Park style cussing - leans a bit more blue than the average CN series not found on [adult swim]. Comes with the territory of making cartoons about that bizarre, awkward period when you've moved out and are holding down a job and are identified as an "adult", but the concept of responsibility and accountability still haven't settled in, and you assume it's some kind of permanent summer vacation until reality kicks you in the balls. Granted, for this show "reality" involves giant arcade bosses come to life, wieners in revolt and audits on reality itself, but that's... why it's on Cartoon Network, I suppose.

Unfortunately, it's been confirmed by a number of Blu-ray.com posters that the new "Complete Season 1 + 2" set has censored several episodes in a way that, conveniently enough, may also explain why the promised lossless 5.1 track has been replaced with a DVD quality stereo mix! So, yeah, no lossless for you on this one. Normally I wouldn't care that much for a show like this, but as this is one of the very few cartoons out there to use actual pop music along with one of the best original American vocal casts assembled since Invader Zim, yeah, that alone is kind of sticking in my craw.

Reports are far from conclusive at this point, but it's been widely agreed that most - though seemingly not all - uses of words like "hell", "pissed", "screwed" and "crap" are being swapped out with slightly less abrasive language. Pissed becomes ticked. Hell becomes heck. And, yes, they're just copy-pasting words from other episodes and reports confirm that it sounds like hairy, pimply ass. Amazingly enough, none of the show's sexual humor or over the top cartoonish violence seems to have been affected - or at least if it has, nobody's caught any examples of it yet.

The fact that this typically airs in the evenings on Cartoon Network with a "TV PG" rating has always left it with a certain level of leeway with standards and practices, but the show's increasing popularity has convinced Cartoon Network to edit out the minor cussing so they can play it as a "TV G" series before dinner hours. As far as I know the second season had a bit less psuedo-cussing to start with, so the edits may only be to the first season, but until some more obsessive fans have combed through the set I'm not convinced one way or another.

Adding to the confusion is the fact that while the iTunes versions are supposedly the uncensored, original broadcast version, Amazon Instant Video versions are the newer censored versions. I'm getting mixed info on both Netflix's presentation of Season 1 in HD and Playstation Network's available SD episodes, but it's safe to say that any "new" release of this show will likely be the edited versions. How rampant and dramatic these edits get, however, remains unconfirmed.

What makes this even more confusing are reports that the creator commentary tracks on these episodes are rife with actual swearing. "Shit" and "Fuck" and the whole goddamn nine. Hang on now, the bonus features can be all droppin' F-bombs and the show can't even say pissed off?


Who the fuck even-- 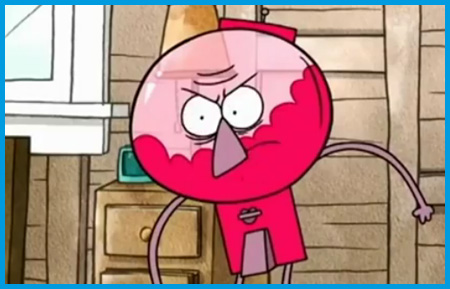 GET BACK TO MAKING SENSE!!

If this were *only* an issue with the broadcast I wouldn't mind much, but the fact that it's wound up on the Complete Blu-ray is, frankly, inexcusable. Warner Bros. and Cartoon Network have shot themselves in the foot on this one, presenting a show with a large adult fanbase who actually appreciate its crass and unusual sense of humor watering it down, and yet leaves content so much more potentially upsetting in the same package. Man, it's almost like they don't have a fucking clue what they're doing...

Earlier DVD releases were also uncensored - such as the "Slack Pack - but they're SD, have no bonus features, and with each "pack" containing 12 to 16 randomly selected episodes it's kind of a shitty way to keep track of how much of the show you have. The fact that I even have to look into what the cheap "Babysitter DVDs" include as a potential alternative to a 'complete' box is pretty fucked up, isn't it?

I was ready to pick up a copy this weekend, and who knows, I still might just to see what punching in the Konami Code on the menu does (yes, that's actually a thing), but man... that's a bitter pill to swallow. If I can get a rundown of all the changes that have been made I'll update this/make a new post, but at the very least, both "The Power" and "Meat Your Maker" are confirmed as edited, and I have little doubt that others have been affected as well.
at 8:18 PM

Fucking lame! I did not know this and will effect the purchasing of this Blu-ray.
Thanks!

Arrrgh. I call boycott. Sounds like they're trying in hindsight to pigeonhole it into the Adventure Time/Sanjay and Craig mold.

Pardon me while I go daydream of an "adult party cartoon" version of Regular Show.