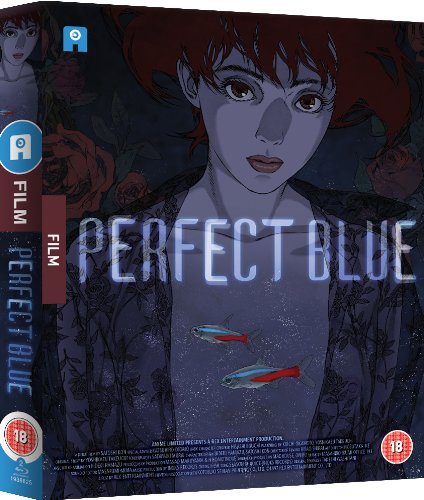 I vaguely remember that "All The Anime" - the UK distributor first announced to the public as Anime Limited sometime last year - had announced Satoshi Kon's masterpiece PERFECT BLUE/パーフェクトブルー for the UK market... but I could have sworn that was a DVD only release. Seems I simply wasn't paying attention, and the Japanese HD master has been provided for an English friendly Region "B" locked UK release after all, due to drop October 14th. Even if the 1080p master is anything but flawless, it remains by far the best presentation of the film to date, and with Kon himself having tragically passed away in 2010, I suspect that this is as good as it'll ever look.

The current Amazon UK pre-order price is a reasonable £21.11/$33.10, and while I can't speak for certain, their first release - more on that in a second - was packaged in a charming little VHS Tape styled Digipak in a glossy cardboard sleeve with a nice little booklet, so I'm expecting (or at least hoping) for similar treatment here. No word on the special features, and I don't really expect the 2+ hour interview with the late director to be included, but we'll just have to wait and see what filters through in the end.

Having spoken with one studio that was keen on picking up the US rights, the price the licensors wanted was keeping it at arms-length from those who are most likely to actually grab it up. For the foreseeable future, English speakers are strongly recommended to consider picking this one up as the closest thing to a definitive presentation of Satoshi Kon's stellar animated thriller. 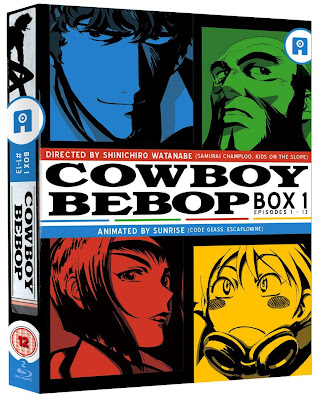 And for those interested in All The Anime's release of COWBOY BEBOP/カウボーイビバップ, I've now seen the first episode in person, and a smattering of caps and comparisons otherwise. Short version is that it looks like they did a fine job with the Bandai Visual materials, effectively producing a dramatically cheaper, English friendly port of the Japanese Blu-ray set on roughly half the number of discs. There's a few little oddities that are kind of annoying, sure - the discs themselves have the wrong number of episodes listed, there wasn't a chapter stop after the OP, minor annoyances I can forgive a new label, for now at the very least - but the AVC encodes, lossless audio and English subtitles, which as far as I'm concerned is all that matters here, are all presented without issue. The biggest issue - a few frames of what look like video corruption on episode 2 - are by far the biggest strike against it. To All The Anime's credit they've already acknowledged that this was an unforseen glitch, acknowledge that it was a screw-up not to catch it before replicaiton, and they'll be fixing it on future pressings, and even offer replacement copies to anyone who wants them (at least in the UK - there's no word yet on if replacements will be offered to international consumers).

The only real "questionable" issue otherwise is the fact that it's a 1080i release, which doesn't help compression (though the discs don't appear - at a glance, anyway - to have any major artifacting issues regardless), and requires your hardware to at least not totally suck to look decent. People who own the JP set and are nerdy enough that I trust them fully have said that the only 30fps content are the paged end credits, which means you could, theoretically, create a 1080p 23.98fps master out of the 1080i source without any real motion judder issues for the first two episodes. That said, this may not be true for all episodes - even the person kind enough to satisfy my nerd-queries admits he didn't check beyond the first disc. For better or worse, much of the CG content appears to have been created on digital video tape and upscaled to 1080, which means that there's some really gnarly shots of the Bebop and any of the hyper-space type effects look aliased as shit. Sadly, that's just the way it has to be, unless you want to start going down the Ghost in the Shell 2.0 rabbit hole.

FUNimation has since announced that Cowboy Bebop will be getting a Region A Blu-ray next year, and while I'm a bit gunshy after their Serial Experiments Lain transfer, I'll admit that I'm hoping they learned from that, and that FUNi's more seasoned video engineers can craft a proper 1080p master and, perhaps, even surpass Lain's shockingly amazing production book. Hey, a man can dream, can't he?

Still, if you're impatient and able to play Region "B" locked titles, there's no reason not to pick up All The Anime's current Cowboy Bebop set and wait patiently for the second half to surface in the near future. As usual, I'm not actively trying to pimp the release to anyone's gain, it's just something for my European and Region Free friends to consider.
at 2:38 PM

Correct me if I'm wrong, but wasn't the Japanese Blu-ray of Perfect Blue known for having a ratty looking transfer? I'm not sure myself, but I remember not hearing good things about it.

I wonder if All The Anime's release will be based on a new transfer or if it's a port of the JP blu-ray.

You can see comparisons between the 16:9 R2 DVD and the Blu-ray HERE. It's hardly comprehensive, but at least it'll give you a decent idea of what you're getting into.

I don't work with ATA, but man, if they were going to create a new scan from 35mm - which is absolutely what this title needs to look notably better - we'd have heard about it by now. This'll be little more than a cheaper, subtitled version of the JP Blu-ray materials, and all things considered, that's still worth the reasonable price they're asking for it.

The JP Blu-ray is... problematic, but not horrible. The best way to describe it is that it looks like a pristine 35mm theatrical print rather than the original negative. Heavy grain, fuzzy shadow detail, severe gate-weave, and not a whole lot of fine detail. If I had to guess I'd say this was probably soured from a 35mm Interpositive (IP) made in the late 90s specifically for home video material use, but that's info film labs rarely share with the public, unless they really went out of their way to do some GODFATHER or BEN HUR level magic with the original camera negative (OCN).

I also suspect what we're looking at is the result of a decentish CRT scan done in real time, which seem quite popular in Japan for older HDTV masters - same funky elevated gamma levels, same fuzzy "noise" that doesn't really look like film grain. A few great examples of this same "look" would be the Tokyo Shock BD of FEMALE CONVICT SCORPION or the Echo Bridge BD of GODZILLA VS BIOLLANTE (or the DAIMAJIN TRILOGY, or literally any of the Toho Kaiju BDs).

Wow, judging by those comparisons, I'm pretty undecided if I would import the even the UK disc if that's the master they're using. Not is there slightly more information on the top and bottom of the R2 DVD, but those funky gamma levels/shadow detail in

...don't instill me with much confidence.

It's such a huge upgrade from my non-anamorphic DVD that I'll take it.