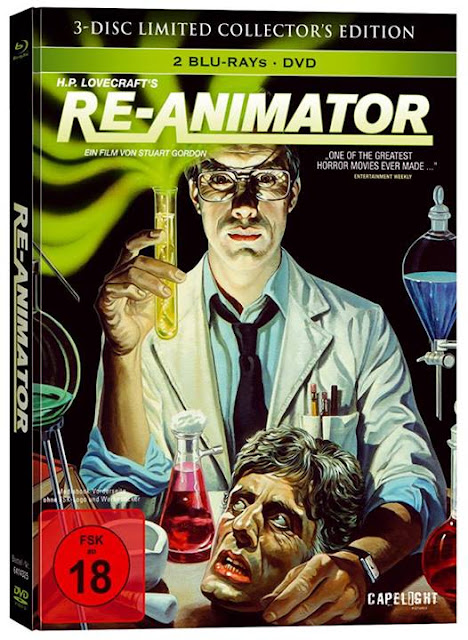 The following info has been translated by my good friend Gurotaku from the CAPELIGHT PICTURES FACEBOOK page regarding their RE-ANIMATOR Blu-ray Special Edition:

RE-ANIMATOR will be a limited edition 3-disc set, including two Blu-ray discs and a DVD. The DVD and Blu-ray with both feature the extensively restored DIRECTOR'S CUT, and the second Blu-ray will include a completely restored INTEGRAL CUT, featuring several extended and deleted scenes that were used on TV and the edited "R-Rated" versions of the film, restored to their proper place. Germany has released the "Integral Version" on PAL DVD with a runtime of about 100 minutes, but how the less graphic 'alternate' takes have been re-intergrated into the uncensored version, I can't rightly say.

Capelight restored 45,000 frames by hand from the Master Positive print, and estimate having removed over 250,000 instances of print damage in the process. The original 35mm film grain will be presented "as naturally as is technically possible", and they've even gone out of their way to apologize for a handful of special effects generated on video that will look worse than the rest of the film (and always have). In short, unless they seriously screw this one up during authoring/encoding, it's going to be a keeper. I've never seen the "Integral Cut" myself - just the deleted scenes as a bonus feature lacking in context - but any remotely justified reason to re-watch one of Stuart Gordon's best horror films is fine by me.

Also of note, Capelight have evidently appealed the film's status of being on the German "Index" of banned and harmful material, meaning that this uncensored release can be sold anywhere over the counter. Not only is this great news for Capelight (who can sell a metric fuckton more copies in Germany), but it means you can import from Amazon Germany and other actual German shops at a decent discount, rather than waffling around them through DTM or similar Austrian/Belgian mail order sites. Also, the "wendecover" notice above that big-ass ugly FSK rating means it's either a sticker or a piece of paper affixed to the media book, and will be completely removable on the actual product. Thank Christ for that, because seriously, Germany is only a half-step behind those hilariously bad Aussie rating boxes that take up more of the package than the actual title of the film itself.

The release date is set for September 27th, and the MSRP is a surprisingly inexpensive 19.99 Euros. At this time a list of bonus material, region coding, and language option has not yet been released to the public. I personally wouldn't be surprised if a less expensive 1-disc BD in a regular case joins the marketplace a year down the road, as it did for ESCAPE FROM PRECINCT 13, but at these prices I'm not about to wait and see.

I'm curious what the full story on this restoration is, as (supposedly) Capelight had access to both the OCN and the AP. Maybe the positive elements were less damaged? With any luck, we'll get to see a restoration demo on the finished disc - I'd love nothing more than to know how much love and insanity went into cleaning up one of the more deserving pieces of grotesque black-comedy the mid 1980s spawned in that brief, beautiful period when the audience was just jaded enough that you could basically try fucking anything on the screen, and nobody would bat an eye if the MPAA shot it down because this new-fangled VHS technology meant you could release it anyway. 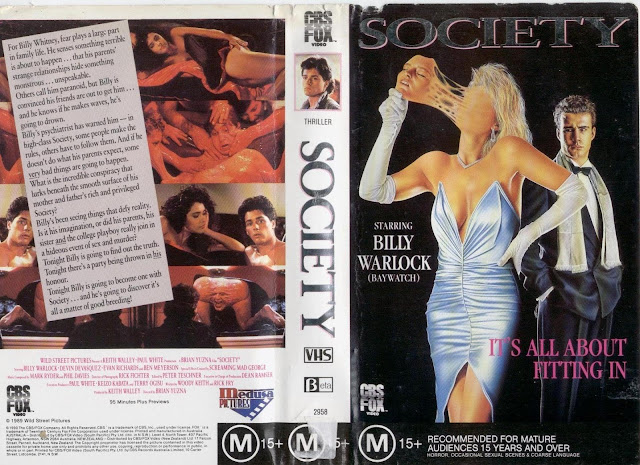 Before I forget to mention it, Brian Yuzna's SOCIETY is getting a German BD release the same day as Re-Animator. Can't say I'm quite as excited for Yuzna's grotesquely silly piece of not-Lovecraft-inspired social satire, but hell, I'll absolutely buy that for the 18 Euros they're asking. No further details, other than that it's a new 2K restoration just like Re-Animator and the upcoming Bride of Re-Animator BD.

And since Capelight's on my mind, it's worth noting that the German release of CHAINED is - to the best of my knowledge, at least - the only version of the film to include the uncensored execution scene included within the feature itself, rather than as a deleted scene. Again, I don't get a dime out of pointing you anywhere, so if you want it, go do it. Not for me. For you. And for Jennifer Lynch... seriously, that poor girl deserves a break.
at 12:39 AM

As long as the transfers are roughly equivalent I'll probably end up waiting for the UK edition of this, though the inclusion of the Integral Version is curious enough to make me consider splurging. I have a particular soft spot in my heart for the sheer gooey insanity that is SOCIETY, but Jeffrey Combs and Barbara Crampton still take priority any day of the week.

I've certainly heard of other cases where other elements have been chosen over the OCN. BFI's release of Svankmajer's ALICE off the top of my head. If the OCN presented particular problems and the AP was in good condition I certainly don't fault them for going that route. Personally I probably wouldn't be able to tell the difference.

Remember the days when people thought that special edition cult releases would never take off on Blu-Ray the same way they did on DVD? My wallet is taking a beating, and I've still got heaps of releases from last year to catch up on.

Was wondering when this would hit! Between this and the Shaw Brothers Blu-rays Paramount Japan is putting out the same day, September is looking to be a very expensive, but hopefully very fun, month...

Regardless I am stoked for this fucker.

I hear Second Sight's UK release has been delayed till 2014 along with Bride of Re-Animator and Society.

I was hoping to be able to compare then choose, but now I'll have to weight the choice of waiting even longer just to see. A bit of a gamble, and holding off on imports is always a gamble in and of itself. But then holding off on White Zombie may prove to pay off as well.