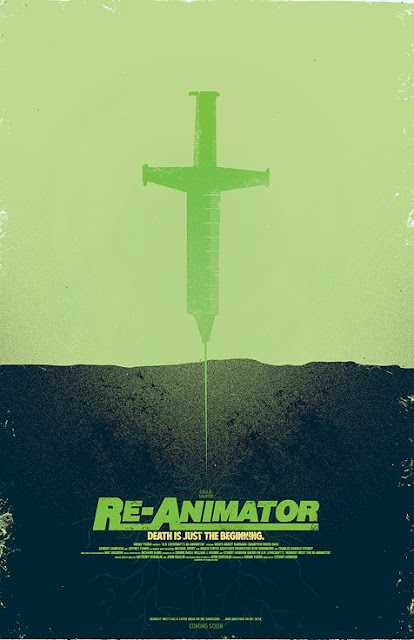 Prints available, if ya' want 'em.

Capelight has announced the bonus features for their three-disc RE-ANIMATOR package, and in a somewhat unsurprising turn, it - for the most part - mirrors the extensive bonus features already found on previous Anchor Bay DVD/Image Blu-ray edition of the film:

Make no mistake, while I tend to think all available material should be included on a re-release, I'm not about to ask that anyone - much less Capelight, who have spent a fortune restoring the film itself - to produce new bonus features, particularly for a film that's had such a comprehensive coverage on all previous releases! I'm sure some fans will lament that there haven't been any "new" bonus features produced since the Anchor Bay re-release in 2007, but to put this into perspective this release probably has more minutes of relevant retrospective footage than fucking Blade Runner - and I dare any film made between 1980 and 2000 to have more interesting things to say about its production than that!

The following two bonuses were originally included on the Elite "Millennium Edition" DVD, but never made the jump to the various re-releases:

It's my understanding that all of these bonus features will be on "Disc 1", and being in SD it shouldn't compromise the 86 minute long feature in any way.

There is one unexpected addition on Disc 2, however, and that's the presence of the TV VERSION alongside the remastered INTEGRAL VERSION. Don't get too excited - they've already said it's going to be an unrestored SD presentation - but as this is essentially the film with the more graphic footage swapped out for the deleted scenes, I don't blame them for not rolling out the red carpet for it. I don't think the TV version has ever been released on video in any official capacity, though the "R-Rated" cut (which both Yuzna and Gordon seem swift to disown) did surface briefly in American theaters and on Laserdisc, but not VHS for fuck knows what reason.

actually they want to do an integral full Length Version in HD - combining the TV Edit with the unrated Scenes. here:

The INTEGRAL VERSION - which features all the sex and violence of the Unrated cut, plus the deleted scenes of the TV cut - will be included in HD, restored from the original master positive. This should be the same as - or at least very similar to - the 100 minute (PAL) cut previously released on DVD in Germany.

The TV VERSION - which is a slightly less risque version of the "R-Rated" version released on LD in the late 1980s - will be included as a bonus feature, but as a non-restored SD version. I'm not certain if the "TV Version" that will be included will match the R-rated print of if it will have further edits, and never having seen Re-Animator on TV (or found a proper comparison for it) I honestly don't know what the differences between the two are to begin with.

I pointed out that the INTEGRAL VERSION will be included in the previous entry, but didn't reiterate it here because I wanted to focus on the bonus features. I don't think this entry was especially clear, though, so hopefully this makes more sense now.