Addendum of the Dead

UPDATE: Good ol' Gary Tooze at DVDBeaver has posted a comparison between the Arrow Video 2010 BD and the new Scream Factory release.

Assuming this comparison is legit (and by and large, I do) it basically confirms everything I've said up to this point: The contrast is boosted pretty hard, the framing is tighter, but the grain is a lot more natural and resolution is at least slightly more improved than previous comparisons had suggested. Flesh tones look a bit more red than I'd assume is "accurate" to the original photography, but man, does it ever make that syrupy red blood pop.

Better than any previous release? You bet. Perfect? No, not quite. Take it or leave it, this is the first new transfer we've gotten for this film in almost a decade; the odds of it improving much more beyond this until marketing hooplah convinces us there's a reason to buy 4K hardware are slim to none.

So! Barring any new actual content on my end, here, have a Thai poster. 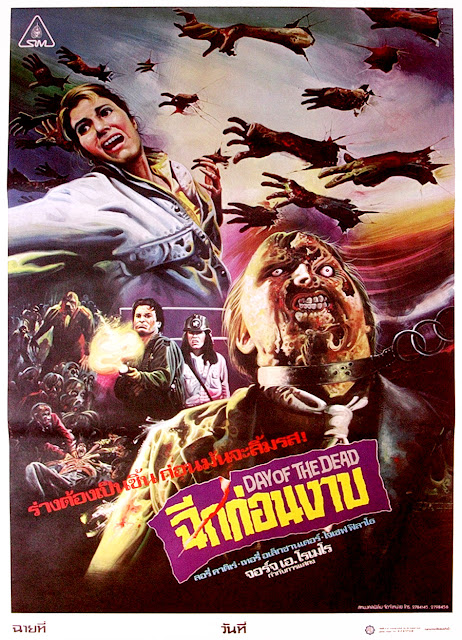 
Not that anyone should ever consider the Kentai Blog any sort of paragon of journalistic integrity - I've long thought of it as more a combination "video review, pornography dump, performance art piece" - but the more I thought about Scream Factory's DAY OF THE DEAD "New HD Transfer", the more it just didn't make sense to me.

Don't get me wrong, it certainly seems to look better than all previous HD releases, but there were some obvious limitations and oddities I just couldn't understand. While the jaded asshole I've long since been assumed that meant we were looking at a decade-old tape master with some minor tweaks, the more I compared it to similar 80s genre titles I've been largely satisfied with on Blu-ray, the more I figured I was missing something. "New Scan", you say? Yeah, I'll buy that... the question is what kind of new scan, and a new scan of what, specifically?

So I messaged Cliff MacMillan to get some answers. 'Cause why the hell not? I asked him what film materials were used and when the new transfer was made, due to its resemblance to Anchor Bay's old "Divimax" master, and was pleasantly surprised to find that he had this to say in reply:

It probably was the same IP.
It was done earlier this year and I oversaw the transfer.

So, there we have it; the "look" of the transfer likely has far more to do with the 35mm Interpositive itself than it does the telecine process. I'm a little surprised by this answer by the simple fact that I can't imagine a 10 year old IP being preferable elements to work from than the original negative, much less that it would be considered when your marketing sizzle is "New 35mm Transfer".

If the same 35mm IP was used, as Cliff assumes was the case, that would at least help explain similarities in both optical focus and contrast values; I was making the mistake of assuming this was supposed to be a new transfer from the negative, since I have trouble wrapping my head around exactly why anyone would make a new HD scan of an old 35mm print... then again I'm reminded of the horror I felt when Frank Henenlotter said he compared the (incomplete) 16mm negative for Basket Case compared to the (complete) 35mm Internegative, and decided to go with the latter, claiming that the difference between the two just wasn't worth worrying about.

I asked for more details - a 2K DI versus a real-time 1080p HD Telecine, and why the OCN wasn't used. Again, I got a reply that, if nothing else, clarified some questions that have been rumbling around in the ol' noggin:


We used the element available to us. Yes, it's an HD transfer.

And... there we have it. What we're seeing is a real-time 1080p scan of the 2004 Interpositive, and the OCN was (presumably) not available to scan in the first place. George A. Romero's Day of the Dead looks as good as it's going to for the time being, and while I have little doubt that Day of the Dead could look better still, I'm satisfied that Shout Factory did what they could with what they were offered.

Thanks for clearing my bitter skepticism up, Cliff!
at 5:13 AM

I hate to be that guy, but he didn't specifically say it was a new scan. Just that he oversaw the "transfer." It's been made clear that Shout doesn't really go in for handling film materials. Oh, maybe for a few extras they do, but they're happy to take whatever digital masters already exist and go from there.

There's only a slight difference in framing and little distortion between the two. That would be done in any transfer of the scan (li'l crop of the gate here and there, press a button to make it fit 16:9 and DONE [even pixel ratios could explain it, with AB targeting SD/16:9 and SF targeting native HD]). Are there any cases of two clearly different scans of an element that look so similar? Zombi 2 is a great case of everyone claiming they've scan the negative with radically different results.

Thanks for your efforts, Kentai! A bit pissed that this won't have the transfer I was hoping for but it's been pre-ordered and as long as it's better than the AB release then that's something.

scratch that - after checking out more screen caps I'm not suitably impressed to upgrade to the Scream Factory version - the colour timing, cropping and blown highlights have resulted in a cancelled pre-order... such a shame as I was looking forward to this for months!