Despite Bill Lustig's label Blue Underground having largely vanished off the face of the Earth after their underwhelming KILLER NUN release a year ago, after which they've mostly been doing dirt-cheap 3-packs of old catalog DVD titles.

Despite the frustration I've never been to shy to show over the quality on their Italian cult titles, I don't wish any ill tidings on Bill or his company. Blue Underground's QC is among the best in the business, and their focus has, largely, been on complete presentations of high quality titles. I like their business model. I like a lot of the titles they do. I like everything about the thought process behind those releases... it just so happens that the bulk of their catalog I was into - namely, the Euro Horror releases of an Argento and Fulci obsessed nature - happened to be sourced almost entirely from ugly HD masters created by LVR Video and Post in Rome. BU trusted their contacts to hook them up with high quality transfers from - in many cases - the original camera negatives, and in the end... well, if you can look at the comparisons between the Blue Underground release of ZOMBI 2 and Arrow Video's "proper" restoration and not see why I've been upset, I really have nothing to add at this point. 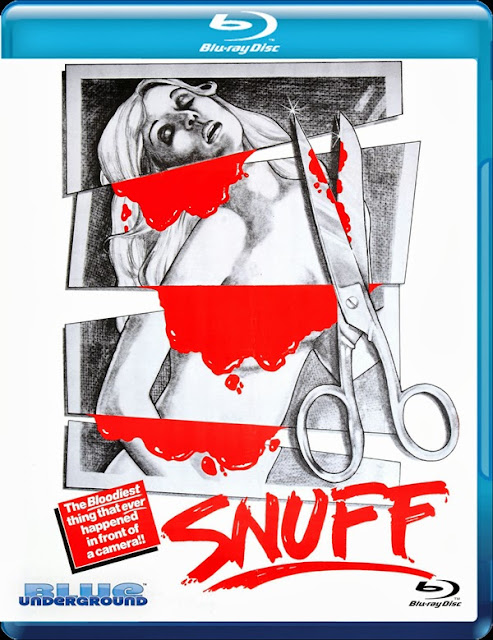 They've ever so slowly been building back up for a Blu-ray comeback, announcing the dreadfully boring infamous publicity-stunt-sold-as-a-movie SNUFF with new bonus features, including... an interview with Drive director Nicolas Winding Refen, for some goddamn reason. They've also announced MANIAC COP 2 and MANIAC COP 3: BADGE OF SILENCE - both directed by Lustig, no less - which is all well and good, but still doesn't thrill me as hard as I'd hoped.

These should all presumably be out before the year's end, though so far only Snuff has a firm date of October 22nd. I'd warn you against buying it, but anyone buying this flick blind deserves exactly what they get. 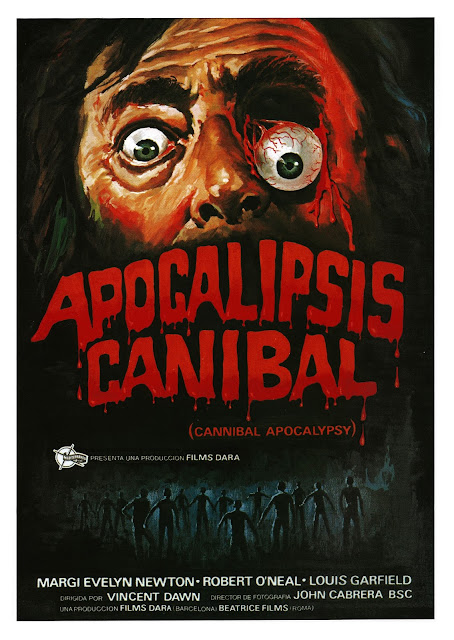 Don't let the title fool you - despite the name on this lovely one-sheet bearing an uncanny resemblance to a certain movie directed by Antonio "Anthony Dawson" Margheretti (starring John Saxon and released in Italy as "Apocalypse Domani" of all things), this is actually a poster for Bruno Mattei's 1980 Dawn of the Dead ripoff best known as HELL OF THE LIVING DEAD. It was released under the brilliantly silly title 'Zombie Creeping Flesh' in the United Kingdom, and 'Night of the Zombies' in the US before a closer approximation of the original Italian title (Virus - L'inferno dei Morti Viventi) became it's standard title on DVD in the late 90s.

I always think that I don't like this movie, but that's not entirely true. Yeah, the first third is basically "Dawn of the Dead in Africa" and it even goes as far as to re-use Goblin tracks from Romero's far superior film verbatim,  but once it finds its own identity it becomes kind of awesome in its own right. The problem with the film isn't that it's bad, merely that the two things it's trying to do - jungle exploitation nonsense, and frentic undead overload - are done so much better in Mountain of the Cannibal God and Nightmare City (respectively) that you walk away feeling like you've somehow already seen this movie. The final gag is one for the ages, and there's several lovable set pieces along the way, but I suppose how you interpret the scene of the virtually empty UN Building will sum up how you react to the film at large; you're either looking at the most surreal and unsettling moment in a drama that concerns mankind's demise, or you're watching a dumbass B-movie that forgot to hire extras for its emotional sucker punch. I tend to think it's a little of both, and such is the magic and wonder of Bruno Mattei, when you get right down to it.

Thankfully, BU wasn't done with the BM madness just yet... 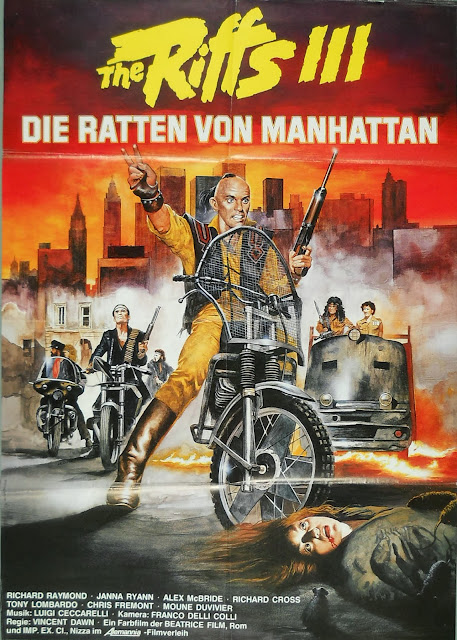 Confused? Well, if you're a biker movie aficionado and you grew up in Germany, it's going to be even worse; "The Riffs" was the name given to Enzo G. Castellari's awesome Walter Hill knock off, 1990: The Bronx Warriors, so its inevitable sequel - Escape from the Bronx - naturally became The Riffs II. So what the hell is this?

The subtitle here might help give a little more context to the fact that this is actually ... ah, y'know what? Fuck it, here's the trailer!


I honestly can't believe it myself, but none fucking other than Bruno Mattei's RATS: NIGHT OF TERROR is getting a Blu-ray sometime in 2014. SUCK IT, LITERALLY EVERYTHING ELSE!

Look, I know it's a retarded movie that I shouldn't be anywhere near this excited about, but it has the single greatest "Fuck it, I've already got your money - what are you gonna do about it?" ending ever conceived. It's just that diabolical. Fans of Bruno Mattei - and of awesomely mind-melting garbage cinema in general - are urged to pick this up day one, if for no other reason that somebody is still releasing these gems.

Unfortunately, the big question on my mind is "How will they look?" - and thus far, we've got no reason to assume that BU will be getting materials any better than they ever have. To be fair, even if you can accept LVR's horrendously noisy "look", the fact that the quality of the scan itself would vary wildly from film to film - with, for example, The Bird With The Crystal Plumage looking dramatically better than The Cat O' Nine Tails, despite both being of a similar vintage and using virtually the same photographic process and style -  to the point where your Blue Underground title could look "Pretty good, not quite perfect." to "Jesus Christ, this hurts to watch".

The other question mark hanging over this whole endeavor is "Why now?" BU had more or less retreaded right into a figurative underground, slinging cheap DVD packs and releasing absolutely nothing new over the last year. The presence of these two features suggests there's still a market for these movies in HD - small though it probably is these days - so why did Bill Lustig and pals wait so long to announce them? Sad a thought as this might be, I wouldn't be surprised if it's taken this long for the licensors - that is, the companies in Italy who own both the rights and the film materials to these titles - to acknowledge how shitty the market for these titles really are, and have dropped their asking prices to match. Selling 3,000 copies of a title isn't going to make anyone rich, but there's a big difference between selling 3,000 copies of a film you paid $5,000 for and a film you paid $25,000 for. If Lustig has finally found a way to make this business viable once more, I'll happily throw more money to get my fix for vintage Euro Horror garbage in 1080p.

With all of this in mind, I'll be looking very closely at these releases next year. I don't expect a miracle, but if they wind up looking better than the DVD without any excessive noise issues to complain over, I think I'll be happy enough. 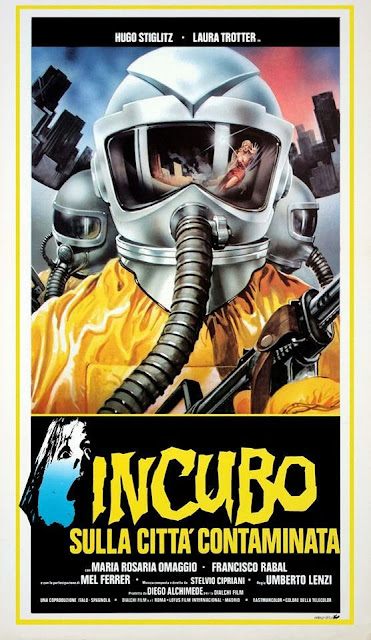 While we're on the subject of "How The Hell Is THIS Coming Out On BD Holy Shit!!", Umberto Lenzi's fantastically bad 1980 "birth of running zombies" train-wreck NIGHTMARE CITY (Incubo Sulla Cittá Contaminata) is also getting a new Blu-ray from Raro Video in October, and then a likely more extras-packed release from Arrow Video sometime next year. I couldn't care less what new interviews they trot out for this one - the film speaks for itself! - but from the looks of Raro's entire Blu-ray output up to this point, steel yourself for yet another flawed LVR transfer...

Hey, as Public Enemy once so perfectly said, bring the noise.
at 11:15 PM

I look foward to watch Hell of the Living Dead on Blu-ray.

Even since i started collecting BDs in 2010, i have been waiting for this film to hit Blu-ray. I hope the English dub get's the usual 7.1 remix.

Maybe the check Lustig got from the Maniac remake just cleared so he has some more capital? I seriously can't wait for Hell of the LD, Rats, and Nightmare City. The announcement of Hell put me in a better mood than I've been all year.

Are you assuming Arrow is going to tackle Nightmare City or was there an announcement I missed? That's gonna make for some internal conflict as I reeeeally want that in HD asap, but I'm tired of the double dipping. And I just finally got my Zombi 2 replacement disc in the mail this week.

I haven't gotten any of their releases since Zombi 2- is the general consensus that they are getting non-LVR Italian transfers? There's a lot of positive word on their Bava titles, but haven't heard much about them from the sites with more trusted eyes like yours.

And the final question: how long before Zombi 3 and After Death? *crosses fingers*

There was an ANNOUNCEMENT that Arrow Video would be releasing Nightmare City in August. I'm a little surprised I didn't parrot it, considering how much I love that dumb little flick, but pobody's nerfect I guess. No word on what extras the UK release will have, but as the Raro release already has a commentary and interview with Lenzi I'm not sure what more they could really do to temp me to wait another several months... the word "steelbook" sure wouldn't hurt, though!

As far as materials go, Arrow Video is still (unfortunately) largely stuck with whatever the licensor offers them. The Mario Bava titles were all restored without LVR's "help", so for all intents and purposes they actually look pretty damned good - Arrow and Kino are using the same HD masters, just color correcting them very differently, and Arrow have gone out of their way to include the more familiar "Export" cuts as an option as well. The only exception is BAY OF BLOOD, which Arrow released ages ago before they had even a half-clue what they were doing; if you dig that flick and you realize just how wrong the color timing on the UK release was, the Kino transfer might well be worth a double dip.

I honestly can't wait to see what the UK release of LIFEFORCE looks like. I've been saying for some time now that Shout Factory's compression is "meh", and I'd like to see just how dramatic a difference an otherwise decent release from those guys looks stacks up against a properly encoded Arrow Video release.

CANNIBAL APOCALYPSE - YEAHTZEE!!!
W-Wait a minute - it's actually HELL OF THE LIVING DEAD they're releasing?
That will suffice then.