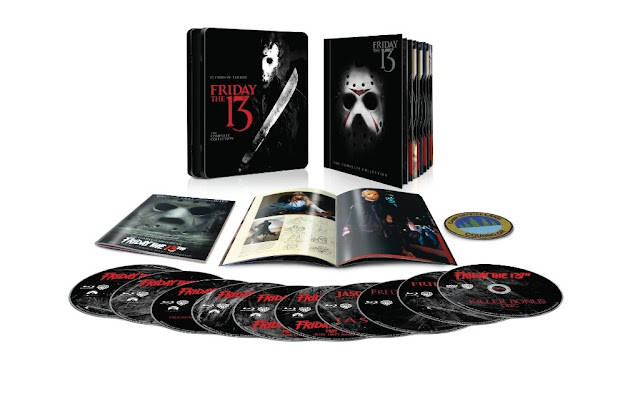 Haven't said much about Warner Bros. upcoming FRIDAY THE 13th: THE COMPLETE COLLECTION Blu-ray box for a couple reasons - it's a little late in the game to have me legitimately excited, I've already bought the first 3 films, there's so goddamn much content that posting anything before a couple people had theirs and could confirm what is and isn't in it would be pointless, et cetra.

But honestly, the big reason is that if you're a big fan, you already know everything I'm about to say, and you were going to keep your pre-order no matter what was wrong with the damned thing. The other thing is that, seeing as how I'm trying to weigh my purchases of silly things right now, I'm not beating down the postman for my copy, and getting into a thing about it seems a bit... unfair, I guess. I do love roughly half the Jason movies, I'm a bit sad to say, but I've also watched and bought them enough over the last 20 years that if I wait another few months for these, I don't think Warner Brothers is going to take it too personally.

So, here's the basic rundown for those who - like me - still want it in general, but not hard enough to punch their own mother in the tit for it:

Discs 1-3 are direct copies of the old Paramount discs - BD50s packed with bonus features, as they all should be. Despite Warner having a firm "NO UNRATED RELEASES!" policy, part 1 is still the uncut version, mostly because it's 2013 and the MPAA clearly doesn't give a shit about Kevin Bacon getting stabbed through the windpipe this late in the game.

Disc 4 is a stand-alone disc that could easily have stood next to the original Paramount trio, and is most notable for including raw workprint footage in 1080p. This is evidently the only F13 film to have actual 35mm elements for the missing footage, so while it's sad to not see it integrated back into the film proper, I guess it otherwise maintains consistency with parts 2-8.

Disc 5 and Disc 6 are both double features covering "A New Beginning" to "Jason Takes Manhattan" and everything in between. Despite lowering the bitrate slightly to fit two 90 minute films and bonus features per disc, so far screenshots and a handful of trustworthy reviewers suggest that everything looks roughly equal to the stacked dual-layer single discs the first cycle of films got. I can understand people being wary at the thought of double feature discs, but how you encode something is so much more important on BD what numbers you've set the bitrates to that it's possible to double the bandwidth and still produce a worse looking transfer.

Disc 7, however, is where it gets disappointing. Not just because it's the one that includes "Jason Goes to Hell" in general, but because Jason Goes to Hell is the R-rated theatrical cut, not the unrated version that's been on video for two decades. Were it a situation like the original film - less than 10 seconds without any major impact to the experience - I'd still be miffed, but would agree that it was a minor loss. However, JGTH is bloody as fuck in its unrated glory, and jettisoning the uncut version means the commentary track went right in the garbage with it. There's also a thing on there about zombies in space? So not caring at this point...

Disc 8 is Freddy vs Jason, which I've always figured was about as good a flick as you were likely to get from the premise. Both icons of 80s murder fantasy are given a fair shake, both have a sensible (if not "smart") reason to throw down, and Ronnie Yu managed to create a film that has a lot more visual flair and atmosphere than it frankly deserved. It's the ultimate fanboy film, so of course fanboys can't stand it. Screw all you guys, I still like this dumb movie.

Disc 9 is the Marcus Nispel remake of the first several F13 movies, and while I'd argue it's a hell of a lot more watchable than the original (seriously, that first film is dull as dirt), it's ultimately a slow, trifling and totally uninteresting film that mistakes developing a literal avatar of slaughter as taking the franchise in a bold, new direction. Mamma's Boy Jason could have been interesting, but the rest of the film needed to be exciting and visceral to make it work and juxtapose on the character development of the killer being the core goodies on offer - the "Killer Cut" is just shy of 2 hours, yet it has a lower total body count than any of the films after "3D". I don't despise the film or anything, it's not half as bad as Jackie Earle Hayley taking a giant dump all over Kreuger's legacy, but it sadly doesn't find anything GOOD to do with the concept either. It's not horrible, it's just not interesting, and that might be worse than if the film had been a train wreck of some sort.

Disc 10 is the very same "Killer Extras" bonus DVD that the 8 film DVD box set released a few years back included. Cheap, lazy fuckers. Then again Warner Brothers purchased this from Paramount largely so they could throw in the New Line movies (which they already owned distribution rights to), so expecting them to produce more content when Paramount has already made more bonus features than most fans would ever be pressed to watch seems slightly unreasonable to ask for. 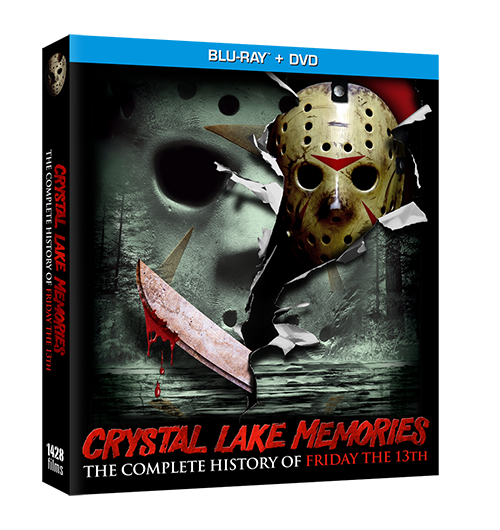 Besides, if you're in the mood for some serious Jason love you can just throw thirty bucks at CRYSTAL LAKE MEMORIES, which runs over 6 hours long. That's BEFORE you factor in the bonus disc only being sold from the producers themselves (which may or may not still be available?), which ups that by another 4+ hours. It's from the same guys that made Never Sleep Again, and you'd be hard pressed to find anyone complaining about that thoroughly exhaustive study of Robert Englund's permanent mark on the pop-cultural landscape.

Look, I personally don't need over 10 hours of a Friday the 13th themed Documentary to die happy either, but man, if you do are you in for a treat!

A commentary or two got lost in the shuffle, as did some "vintage" featurettes, I think - it's really, really hard to keep track of how much crap is in this behemoth of a box set - but really the only black mark on this set appears to be the fact that only the censored version of Jason Goes to Hell has been included. Mind you, JGTH is a pile of nonsensical crap anyway (even by Jason movie standards), but that doesn't mean you shouldn't give anyone willing to hand you $130 for a box set the nicer version of it regardless.

The whole thing is packaged in a a tin that reminds me of those 'Public Domain' WWII documentary sets you find at CVS, with the discs themselves in a flimsy looking cardboard "book", requiring you to slip the discs out of the pages. It's similar to the James Bond or Universal Monsters box sets, but - evidently - much more shit about it all due to the materials used. We're already seeing people reporting massive, disc-breaking scratches, but I think I see those for every type of unusual packaging ever made; maybe the packaging is shit, maybe it's an isolated issue, I have no idea. I just feel like maybe including a separate booklet and a small multi-case, like the recent Anniversary Edition of Blade Runner, might be the smartest thing to do in these situations. Then again, $130 for 12 movies and a bonus disc? Shit, they could have packaged this inside of a half eaten Big Mac and I guess we'd still have no right to complain too hard

The censored version of JGTH aside, it sounds like the set gives you everything you could realistically ask for; high quality transfers, lossless audio, a mountain of (older) bonus features and quite literally every core movie ever made with Jason Vorhees stabbing the shit out of vapid teenagers. It's on Amazon for just shy of $95, which means realistically you're paying less than $8 a film here. I can't say the set is flawless, or that it's so incredible I'm going to rush out to Fry's right this second and pick it up, but I can say that it sounds like Warner and Paramount have done what they could to make it worth the price tag they're asking.

Jason fanatics, your High Def day has come - just hold on to your JTGH DVD and the "Crystal Lake to Manhattan" box for all of the bonus features. Everybody else? Wait and see if Warner will do cheap single-disc releases down the line so you can skip the parts of the franchise you just don't give a damn about.
at 4:04 PM

I'd like to get part 4 and perhaps 5 and 6 eventually if they're released individually. Already own the first three, really don't wanna rebuy them.

Or just save some money and buy the updated iBooks version version of Crystal Lake Memories, which makes fine reading for 10 hours. So yeah.

Kriztoffer: THE NEW BLOOD was actually the first Jason flick I ever saw, so I have something of an unfortunate affinity for it. "Jason vs Carrie" isn't very good, I know, but it at least made a genuine effort to continue the campy goodness of JASON LIVES!, and is a dozen times better than the cruise ship abortion that followed...

DCVoltage: Wait, "iBooks"? Did you just suggest a mother fucking BOOK on my site?!

As someone who has the ability to view 3D i wanted a proper blu ray 3D version of Part 3, including the titles this time, anaglypth doesn't cut it in 2013.

I also wanted Jason Goes To Hell uncut, the fact they can't provide these means i'll hold off until they get sold separately and then i'll pick up a few.

For what it's worth, I'm under the impression that the Amazon.com digital download for JASON GOES TO HELL is the unrated cut. I can only guess that someone besides WB is handling Paramount's digital distribution of the Jason films, but don't much follow streaming/download distribution because, personally, I don't want to pay for streams that aren't part of a NETFLIX-esque package deal.

Not that one SHOULD have to re-buy a film to get it uncut. Ever. But for those who might be interested in a guilt-free HD copy of the Unrated version, at least it's an option.

As for "Part 3D", it's disappointing about the titles being botched and the two eyes being slightly mis-aligned... but, honestly, it's been that way for years now and I feel like anyone who expected this to be fixed was only kidding themselves.

The anaglyph 3D Blu-ray is what it is, and while it's far from perfect, I'm not really expecting us to ever see anything substantially better.