Have You Killed Your Kill Today?


So what are you doing right now, friends? Doing the dishes? Waiting for the pizza guy to deliver a hot box of cheesy shame? Jackin' it? You're probably jackin' it. Not that I care, or anything, I'm just saying... 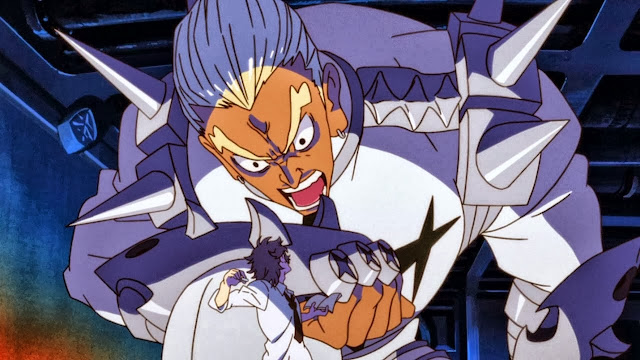 WHATEVER YOU'RE DOING, FUCKING STOP THAT!

Seriously though, stop right now. Stop so you can go watch the first episode of KILL LA KILL\キルラキル, the single greatest thing that's going to happen to your face over the next three months, and you can do that RIGHT HERE. Yes, I'm actively giving Crunchy Roll hits because I want you to see it that badly.

You need a premise? Fine; a mysterious girl weilding a sword that's half a giant scissor shows up at a high school that's about one step worse to its students than the death-prison in Story of Ricky, and challenges the Student Countil's Queen Bee to a fight to the death right there in the school yard on the grounds that she might be the person who murdered her father. Our heroine gets the shit beaten out of her, makes a hasty retreat to her depressing Fortress of Loneliness, and gets chosen by a magical school uniform that gives her super powers in exchange for her blood. She goes back and pommels the living shit out of the Green Lantern Boxing Club President and narrowly avoids letting her new, airheaded friend get literally turned into delicious fried shrimp.

Confused? So is everyone. And that's why it's so fucking amazing. 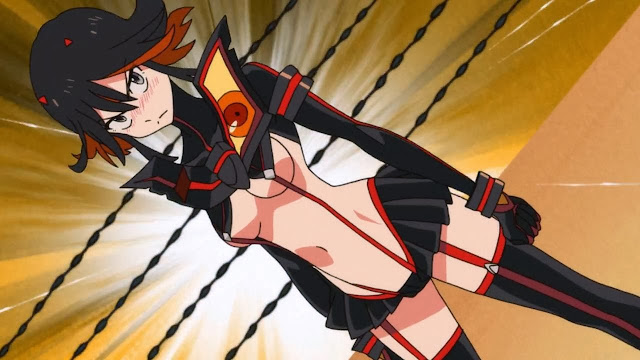 Also, our devil-may-care ass kicking heroine looks like this.

Hyperbole aside, the show is the absolutely insanity-fueled brainchild of  writer Kazuki NAKASHIMA (Oh! Edo Rocket, re: Cutie Honey and Tengen Toppa Gurren Lagann) and director Hiroyuki IMASHI (Dead Leaves, Panty and Stocking, and also Tengen Toppa Gurren Lagann) and was conceived as a glorious throw-back to the unpredictable gag humor of Project A-Ko and Sexy Commando Gaiden! Sugoi-yo Masaru-san, the brutal school rumble antics of Sakigake!! Ototojuku and Ultimate Teacher, and a fetish for super powered clothing that sits somewhere between Saint Seiya and Iczelion.

Yes, at this point I'm probably just showing off stupid shit I've watched over the last decade anf a half, but I don't care how it looks because that's the beauty of Kill la Kill: It's everything that only anime can be. It's everything wild, nonsensical, stupid and glorious about Japanese animation boiled down to its core element and then jammed down your synapses while it's still piping hot, not giving two shits if it even begins to make sense or if it can keep the pace up for a full 13 episodes. In short, it's the best fucking thing that people who were ever legitimately attracted to the stylish, unpredictable and unique nature of Japanese animation as a medium, and is so garish and gloriously absurd in its delivery that it might well create new fans who couldn't give a rats ass about shows that are exclusively about cute girls being cute, or giant robots being giant robots. It's alive in a way that animation - from any country - so rarely is, and I'm thrilled that once I'm done writing this I could be watching the second episode instead of literally doing anything else. 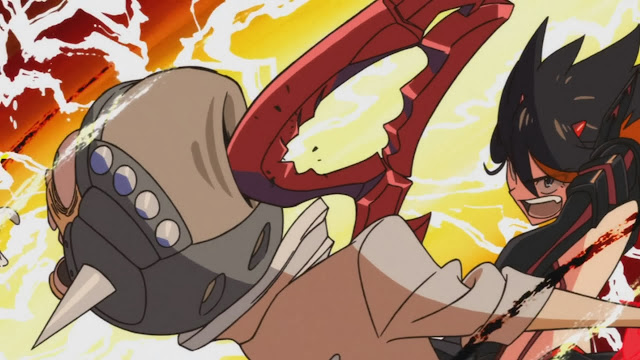 Realism can go fuck itself.

So far, there are two major arguments I've seen levied against the show from detractors; the first is from people who simply can't get over how unusual Imashi's intentionally goofy visual style is. I'm at a loss as to how to counter this because Imashi's animation is consistently a jaw-dropping splendor that sacrifices smooth frame rates for an utterly incredible sense of dramatic effect and staging that make literally every moment a scribbled, over the top attention grabber. That said, if you don't like the first 3 minutes of the show, it isn't going to get any more appealing; Imashi's work is what it is, and either you're going to get it or you're not. Anyone who thought Gurren Lagann's hyper-stylized action was just "too much" isn't going to find this any easier to swallow.

The other issue I'm fascinated to see is an undercurrent of disappointment from people who thought Studio Trigger was somehow "better" than this. For better or worse, Trigger's introductory work was Little Witch Academia, a charming government-funded OVA in which cute girls - who are in no way sexualized or fetishized - basically learn things and show off the idealization of female characters from a Western media perspective. In short, Little Witch Academia set the stage for Trigger to be something "new" and "different", pulling away from the overt pandering and fetishization that most anime caters to and ushering in a new age where female characters weren't pulled from a checklist of which fetishes sell easy wash body-pillows and PVC statuettes in bikinis the best.

Let's be clear here, Ryuuko's outfit is ridiculous, and probably covers less than the average burlesque floor show. She herself isn't thrilled with that fact, and the fact that she's been "molested" by a kink outfit is one of the jokes in the show proper. There's also this lovely little sequence, which is actually a lot less risque than I expect it to be. That said, feminist and white knights ready to snarl at anything that shows off a lot of camel toe are advised to watch the episode in full; no less than two men are stripped down to their bare cock and balls as a means of public humiliation, and the second episode is as full of Manservice as anything we're likely to see this year now that FREE! has ended its run. That's not to say the booty du jour isn't going to be female more often than not, just that - if nothing else - the show is shaping up to be an equal opportunity piece of exploitation.

With the super powers themselves being granted by traditional Japanese school uniforms, the presence of the both fetishized and anthropomorphized Clothing God Senketsu is itself undercutting the rigid norms and crushing uniformity of the Japanese school system, which remember, is one of the core ideas of the show. Yes, of course it's also there to be a gag and sell sexy PVC figures, but at least there's something thematically nuanced underneath the bared abdomens and panty flashes. Ryuuko is being exploited for the camera, but she's far too strong and interesting a character for the sexuality thrust upon her in combat to be her defining trait. Exploitation is not the same as objectification, and while I can sort of understand people being wary of the latter, I honestly don't get what the big deal.

If you still want to talk about the exploitation of 2D women for a male audience, by all means, Wanna be the Strongest in the World/世界でいちばん強くなりたい! is right over there... 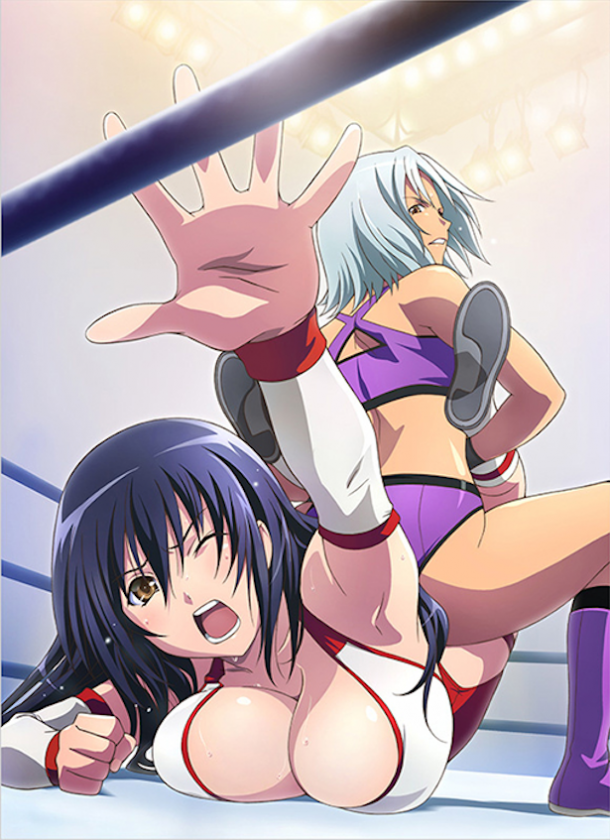 It's basically THE WRESTLER, if Darren Aronofsky were replaced by Russ Meyer.

...yeah, I'll be watching that at some point, too. Oh come on, don't look at me like that! At least I'm not watching Heroes of Cosplay or anything else that's actually dedicated to exploiting and humiliating real people. Seriously, I don't think anyone who looked at the Busty Wrestling Anime thought it would be anything but grunting leg-stretching softporn, and I'm only disappointed to hear that the actual wresling part of this show is, by far, its weakest link. But hey, if you want something in this miniscule sub-genre and want it a bit less crotch-shot focused, go watch the oddly similarly-titled Wrestling Ladies vs Mutant Monsters OVA Wanna Be's... someone else should watch that damned thing, right?

Now that I've shown you unrelated tits, do yourself a favor and go watch Kill la Kill. We need more shows like this - hell, the whole fucking world needs them, because the world needs driven, talented visual artists to craft the next stage in 2D entertainment. Japan is the only country left with a thriving traditional animation market, and while I won't bemoan the fact that the majority of the stuff Japan is focusing on doesn't personally meet my expectations and desires for pop-cultural brain melting greatness, we need to support it when it does hit. Aku no Hana certainly wasn't for all tastes, but it was by far the most innovative and unusual piece of 2D animation in the last year; this is more an established niche director exerting control over a medium he's already mastered, and the results are nothing short of brilliant.

Oh yeah, while I wouldn't rate it as highly as this, people looking for bat-shit crazy animation should seriously be watching GATCHAMAN CROWDS, too. Just give it 3 episodes before you throw in the towel - it takes your brain that long to adjust when you see that vintage TV space opera about guys who dressed up like birds and punched evildoers in the stones turned into, well... 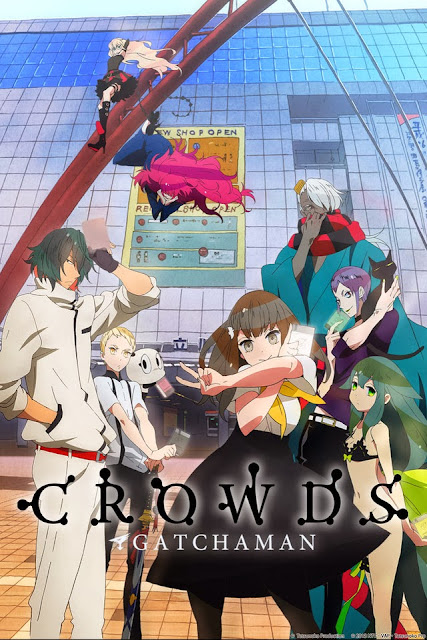 Holy balls am I in love with this.

It looks awesome and really offbeat! By the way, have you seen the Kickstarter for "Bubblegum Crisis" blu ray-
http://www.kickstarter.com/projects/madoverlord/bubblegum-crisis-ultimate-edition-blu-ray-set?ref=category