Bruce Lee's Blu-Ray Fight Back From The Garbage Bin 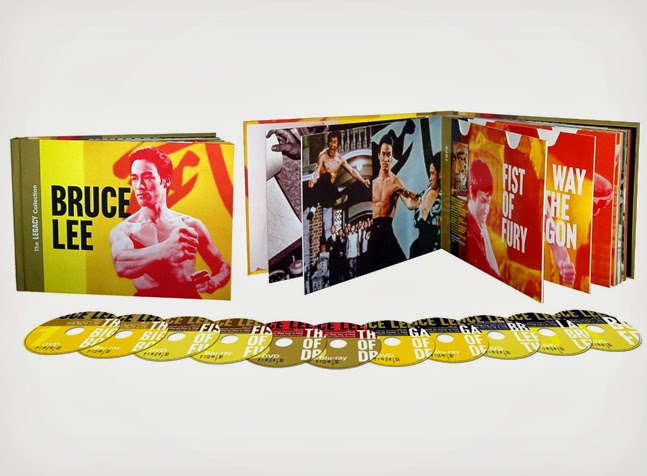 Alright, let's do this one last time...

After much confusion, misery and a large helping of abject shame on everyone involved, Shout Factory have finally done the only right thing humanly possible, and re-pressed the three "main" feature Blu-rays on their BRUCE LEE: THE LEGACY COLLECTION box set.

The good news is obvious: Now The Big Boss, Fist of Fury and Way of the Dragon have been fixed and given new transfers, which aresourced from the HD scans of the original camera negatives which have graced literally every other Blu-ray release of said titles in existence. No more SD upscaled bullshit - you finally get unmolested, high resolution 1080p transfers of the best materials available to date.

The bad news, is... well, remember how one of the big selling points of the Shout Factory release was the fact that they were going to color correct all the films, and finally fix the wonky green and brown push of the otherwise fairly decent Kam and Ronson HD masters? Well, they spent their wad fixing the upscales, so now the only difference between the US and HK transfers come straight down to compression. As I've snarked in the past, compression is oft the weakest link in any of Shout Factory's BD releases anuwau, but suffice to say if none of their previous releases have been particularly offensive to you in terms of banding, macroblocking or general grain structure, the Bruce Lee set should do you just fine. Caps suggest that the new Shout Factory transfers are otherwise equal to any of their other releases on the market - still flawed, to be sure, but far less offensively so than the previous upscaled release.

In short, you can watch these films on DVD with proper color grading, or you can watch them in HD with the same jacked, mint-green and dull-brown colors as the imports. A pretty weak option, but marginally better than any previous set. Over and done, right?

Not so fast, my Chop Socky Hunnies - it gets even worse! Remember how the other advertised feature was the inclusion of the original Mono mixes? Well, FIST OF FURY - by far the best (completed) Hong Kong film in the Bruce Lee canon, by my totally unqualified estimation - doesn't have a Mandarin Mono track! When they re-authored the disc it looks like they added the Cantonese track twice by mistake. There's still a Mandarin 5.1 mix, of course, but the surround staging on these Chinese remixes are infamously poor, dropping in modern sounding foley effects and using heavy noise reduction to try and tame the hiss of the original analog elements to the detriment of whatever fidelity those materials had to start with. The other tracks on Fist of Fury and the other two "fixed" discs in general appear to be fine, but that's akin to saying that the original audio on The Empire Strikes Back is jacked, but somehow the one with the fucking Ewoks came out the other end without a scratch. 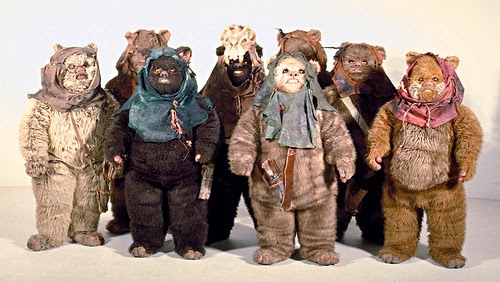 As of this writing, Shout Factory is offering mail-in replacements for just FIST OF FURY, but only to US residents. That's fair, and was a damn bit better than what they did with everyone who bought the original upscaled releases, which was to tell them to lube the box up and stick it back up their own assholes. I'm exaggerating, but not by nearly enough. 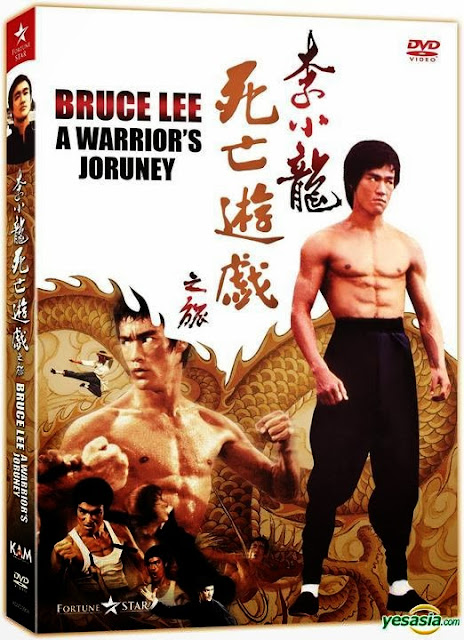 If you absolutely must watch Game of Death, just watch this documentary instead.
Trust me, that 40 minute workprint is as good as this aborted project gets.

So now that the dust has settled, is it finally worth giving Shout Factory the $119.99 MSRP - or even the $76 or so on ImportCDs.com - this mammoth box set is selling for? Well, yes and no. The inclusion of the original mono tracks in all relevant languages - original Mandarin, Cantonese redubs, and classic English - are an attractive option, and the bonus features like the Japanese cut of Game of Death and the rejected English dub for The Big Boss, along with several new interviews, are all pretty nice. Unfortunately, the transfers - one of the biggest issues for these particular films! - are now no better than the similarly priced Hong Kong or Japanese imports, which both offer either English subtitles or English dubs, depending on what direction you'd rather go. Shout Factory promised the definitive, perfect Bruce Lee collection... and gave us a moderately more attractive version that kept flaws that should have been worked out before anything was finalized. In short, it's your best option on the market, but it's not as good as it should have been. Fans who don't already own half a dozen copies of Fist of Fury might find a lot to love about this box set, but as it stands I'm getting my hands on the Hong Kong releases and trying to decide how many hours of my dwindling spare time I want to dedicate to creating my own "perfect" release of these movies. For crying out loud, Bruce has been dead for nearly 40 years; it shouldn't take this goddamn long to get their presentation correct!

Then again, there's one last prickly pair all up in my craw I have to say something about before I move on... the following message was given to Blu-ray.com verbatim, and it takes every ounce of my being to read this without my eyes crossing and my brain simply giving up and going comatose out of sheer frustration:

"New Blu-rays for The Big Boss, Fist of Fury, Way of the Dragon. Contrary to speculation circulating on the internet, the original set did contain hi-def masters of the first three feature films. However, after comments from fans who had received early copies of our set, we discovered that our sources were not the recently restored transfers used for the Blu-rays in Hong Kong and Japan, but rather the original masters done a few years ago in Canada. We therefore acquired the improved masters (the master for Game of Death was no appreciably different), and have included them on this new set, for a truly definitive Bruce Lee collection." 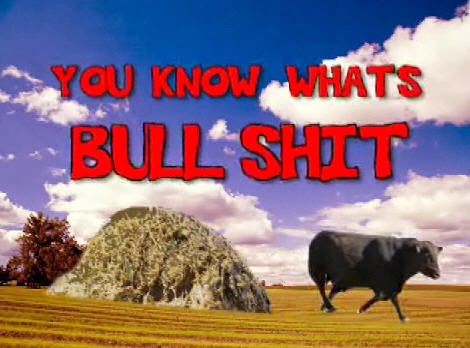 The original Shout Factory transfers were absolutely upscaled from SD sources. In fact, I defy anyone to argue why Shout Factory was willing to re-press an entire run of three BD-50s to use "better" HD masters despite having already paid to color correct and remove print damage from the previous materials; that's literally money down the drain, and if they weren't full of shit, they would have stood their ground on it. The mere fact that they re-pressed them at all is all the proof I need, but if in doubt, TAKE ANOTHER PEEK AT HOW AMAZINGLY BAD THESE THINGS WERE.

It's entirely possible - hell, likely even - that Fortune Star provided HDCAM masters, but an upscaled HD tape is not an HD source. This isn't even one of those "Maybe Kentai's just expecting too much again..." situations. No friends, this was one of those Hills Have Mother Fucking Eyes situations where the difference between the DVD and the Blu-ray is literally non-existent, at least in terms of resolution. This is one of those instances where Shout Factory absolutely should have known better, and if Shout Factory doesn't have anyone on staff who can, Fotokem should have caught it - long before they started actually working on these transfers, much less signing off on them as "good enough". There's just too many checkpoints this particular set went through for anyone to use ignorance as an excuse. Perhaps that's all water under the bridge now - after all, we finally have a set that more or less replicates all the import releases we've dealt with until now with additional audio tracks and bonus features, and while I suppose that's "good enough", we shouldn't have had to fight tooth and nail just to get here in the first place. 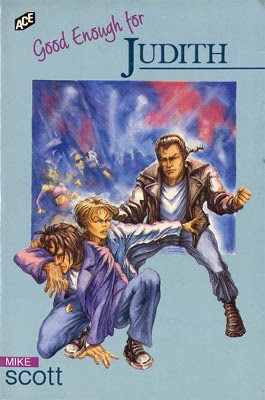 ...why did I google image search "Good Enough", anyway?
More importantly, what is this and why might it be awesome?

This does, however, give me pause as to what to do about titles that aren't sourced from HD masters because HD masters simply don't exist. Things like older concert videos and sitcoms shot on video, and cartoons rendered at lower resolution aren't going to benefit from HD in terms of resolution, but they can - depending on how they're handled - still look marginally better due to BDs increased bandwidth, compression options and so forth.  I've bought several of FUNimation's "HD Remaster" titles, which is simply their code word for giving people an upscale ("HD Native" is their term used for a 'real' HD master). Now, the fact that FUNimation had to develop a new vocabulary for packaging blurbs suggests that it is something you should point out - and, frankly, FUNimation doesn't always keep proper tabs on it, with titles like Burst Angel and the first 4 episodes of Hellsing Ultimate claiming to be full HD when they are, in fact, upscales. But FUNimation doesn't make it a habit of lying to consumers because they know that without proper trust, nobody will drop $65 on one of their fancy box sets because they'll have no clue what they're getting.

Shout Factory - and Cliff MacMillan specifically - have made an error in sticking by their story that the Bruce Lee Legacy set was never made from upscaled materials; that's likely what their licensors told them, even, but Fortune Star is even more clueless than Shout Factory, because I guess when you own the rights to Bruce Lee, Jackie Chan, John Woo and Jet Li's majority catalog forever you can afford to not really give two shits about it all. Shout Factory has done the right thing with this release... but they've shaken the trust I have in them. When  Shout Factory says a release will be uncut, for example, I know they're not looking at the materials to answer the question; they're simply checking what the company line for that question is and passing it along. It's disheartening to know that, and it only encourages me to pick and choose which titles I'm going to purchase from them as wisely as possible. 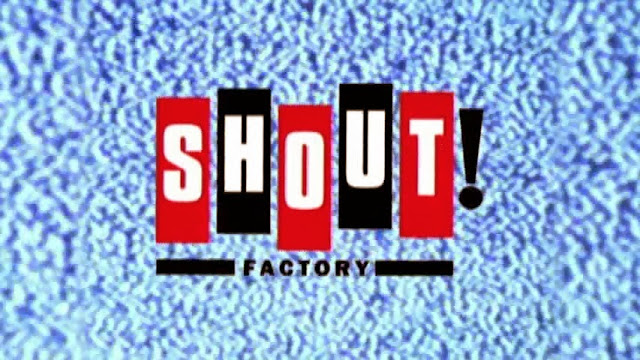 Don't get me wrong, I won't be boycotting Shout Factory - that'd be absurd. They have too many fantastic titles lined up, and the fact is even with their weak compression and occasional ignorance towards their own product, the titles that are presented well outnumber the titles that aren't. Yes, Shout could have done a lot more with Audition, Good to See You Again Alice Cooper, They Live! and several other titles I could rattle off, but at the end of the day none of these are eclipsed by a wholly superior version... and hell, some of them don't have an import to even compare them to. Shout Factory is a far cry better than nothing, and as much as they occasionally let me down, I won't be forgetting that.

Now, all of that said, it's worth noting that Arrow Video recently kicked their ass with LIFEFORCE, featuring a visibly superior encode and an entirely new pass of carefully applied scratch repair. I won't be boycotting Shout Factory, but if another label is doing the same title... well, it might be worth looking into, is all I'm saying. Man, who thought we'd ever reach the point where fucking Arrow Video was one of the most trustworthy licensors out there in terms of video presentation?
at 3:34 PM