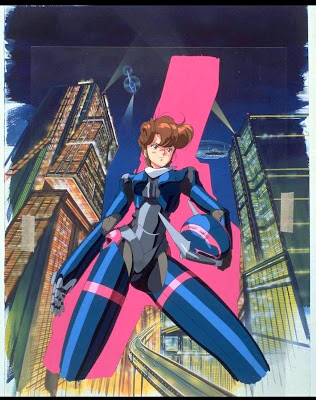 Just a friendly reminder: The AnimEigo BUBBLEGUM CRISIS KICKSTARTER has less than 72 hours before all is said and done. It hit its goal in about a day, so that $50 guarantees you a 3-disc BD set. The plan appears to be to offer these Blu-ray sets direct to the supporters and not through typical retail chains, so anyone who wants to own the original 8 episode OVA series is urged to pledge their $50 while the pledging is still good. The very nature of these sets means that "extra" copies on the scalper's market seem unlikely, and while there may be a small contingency of people who are interested in buying the original BGC series but aren't interested in doing it through Kickstarter, I can't imagine there's enough of them to justify doing a standard release on top of this one.

If you wanna get your BGC 2032 on, and don't chip in for the limited AnimEigo set, keep in mind that the Japanese release - which is neither subtitled, nor includes any of the bountiful extras AnimEigo has already gotten approval for - lists for about $200. The odds of a reasonably priced Blu-ray with English subtitles after all o' this sounds like a flimsy possibility to me - but hey, the suggestion that AnimEigo would resurrect Bubblegum Crisis in Kickstarter form at all sounded  kind of crazy to begin with.

Look, I know as well as anyone that the concept of owning a film in 2013 is almost old fashioned - hell, it's not like I don't have perfect 1:1 BD50 rips with the English audio and subtitles added already - but even so, this is the first ever crowd funded Blu-ray that I'm aware of, and it could well set a precedent for similar niche-interest titles that skew towards a smaller, collector-driven market. I'd like to see this be the start of a way for titles like this to exist in the US market, and for that to be a possibility there needs to be a message, one loud and clear, that this is something Blu-ray loving old anime watching collectors types actually want.


I want Priss and the Knight Sabers in 1080p, and I bet a lot of you reading this do, too. What else could we get if this proves to be a great release that everyone is thrilled by? AnimEigo was, admittedly, off to a rough start with those disappointingly processed-looking Lone Wolf and Cub BDs, but there's already a perfect master for this series: At this point, copy-pasting the Japanese encodes would be enough to satisfy everyone. There's enough potential for more, and for greatness, that I'm willing to let the "meh" quality of their previous entry into the format gave us and believe that AE's staff can both learn from previous mistakes, and recognize quality when they see it.

Have they confirmed if AD Police Files made the cut? Loved to see it in HD, as well as with both its US and UK dubs.

I believe Robert said that upwards of $200k would be needed to do a new telecine of AD Police Files. He mentioned this over halfway through the campaign, so it's a little frustrating he didn't set it up as a stretch goal early on, especially when this project was funded within the first day or so and then hit a brick wall.

But, there may be possibility for there to be another Kickstarter for that series and hopefully Bubblegum Crash in HD (though apparently there are some issues preventing the latter from happening right now).

I'm crossing my fingers AnimEigo don't muck things up. We have nice Japanese masters of Bubblegum Crisis. With presumably two discs being solely devoted to the series, I would hope the encodes will be practically identical, at least perceivably so. Also hoping for standard subtitles and not the goofy rainbow-colored ones they used on their DVDs.

If Blu-ray ends up being the last physical home video format, at least there's enough shit coming out to keep me pretty satisfied. Though it'll be sad if the day ever comes when new releases are only available digitally.

I backed this. Some of us still want to "own" the media we pay for. Good on AnimEigo for getting the ball rolling.

I did something crazy after reading Kentai's post. I just payed 60USD for something that is supposed to be out not until August 2014. I hope AnimEigo eventually provides technically decent Blu-rays. No DNR and other digital tinkering to "enhance the experience" like in Lone Wolf series. Just utilize existing Japanese masters/encodes. I hope the majority of fans agree and can also influence AnimEigo to do the right decisions. There is always group of people who prefer digital tinkering of old school animated features because "the film grain/film look did not exist in the original cel."