Since it was brought to my attention that I had merely shrugged off the lack of the original MONO mix on the recent 35th Anniversary Edition of John Carpenter's HALLOWEEN, I decided I'd do my best to clear the air on the matter. Not to try to cover my ass too vigorously, but it's worth noting that my write-up on this title was almost entirely intended to be about the ever controversial look of the iconic film, and my opinions towards it kinda' spilled into the mix as I went... the audio is worth talking about, it just wasn't what I was particularly interested in talking about at the time.

Plus, I had friends over for the Halloween week. Didn't have nearly as much time to dick around before Samhain as I typically do. 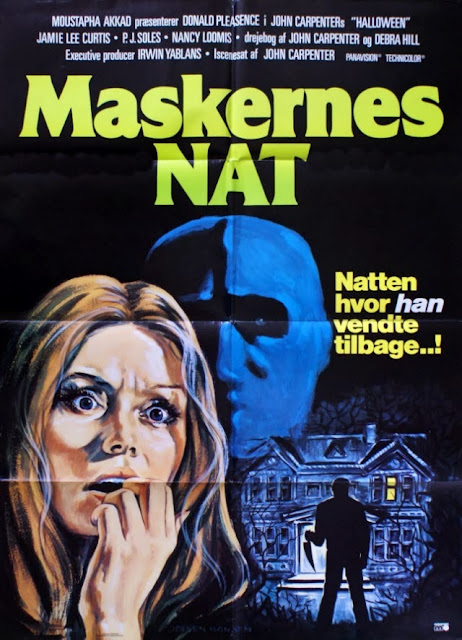 Also, I had nowhere else to put this killer giallo-inspired Danish one-sheet.
Yes, that really is an obscure poster for HALLOWEEN as "Night of Masks".

Now, here's the thing: There's two arguments leveled against the 35th Anniversary BD's audio - one being that the new 7.1 mix is identical to the older 5.1 remix dating all the way back to 1999, and that the original mono mix is, infact, a down-mix of the 5.1 materials. I'm fascinated to report that half of this is true... and not the half I expected.

Before we go any further, I'll just put this here: A detailed comparison written by a one Daniel Pulliam. I applaud his dedication to this issue, and couldn't have been more verbose on this issue if I tried... Hey, if you want someone to confirm this shite for Halloween, I'm not your guy. He is. To try and sum it all up his 30 minutes of sad frustration is going to be a little complicated, but fuck it, let's give it a go...

In 1999, Chase Audio created a new 5.1 mix for Halloween. Both the 1999 "THX" DVD and the 2003 "Divimax" DVDs included both the 5.1 remix, and the original mono tracks. So far, so good. As stated in my previous write-up, the 2007 Blu-ray release is essentially an HD port of the 2003 Divimax DVD, so that remains true of that particular release as well. So far easy enough, yeah?

Where this gets a bit confusing is the 35th Anniversary claims to include the "original mono", but it's actually a down-mix of the Chase 5.1 audio master. The easiest difference to spot is likely when Michael sits up in the back seat of the car, which has a loud, high pitched "sting" on the original mono track that's missing on the remix. There's a number of similar issues, but - honestly - I find all of them to be pretty minor, even on careful comparison. They're different, sure, but this isn't a SUSPIRIA level clusterfuck where characters are reacting to foley effects that no longer exist, or even a TERMINATOR level mess where Arnold's giant hand-canon mysteriously sounds like a comically inadequate pee shooter. While not perfect, Halloween's 5.1 mix is just rife with those minor oddities that tend to crop up when you try to re-create a mix from scratch, and while I can understand people being frustrated by these changes, I honestly don't think it's quite the atrocity against the artform that Daniel does.

That said: The "Downmix Mono" track on the 35th Anniversary BD should also be avoided, not just because it's a lie but also because it sounds like absolute ass. Dialog is so low it sounds like mumbling ants doing an impression of the adults in a Peanuts cartoon. My guess is that when they folded the 6 tracks down they lowered the center channel by several decibels trying to compensate for a mix problem that didn't actually exist, crushing dialog and muting some sound effects to the point where they completely disappear. To put this another way, the main reason I wasn't really sure the mono mix wasn't legit at a glance was because I thought there was no way a surround remix from '99 could possibly sound that bad. So yeah, Anchor Bay fucked up on this one, and they fucked up in a way so impressive I'm kind of shocked anyone signed off on it in the first place.


That having been said: The 7.1 remix is not a a direct port of the Chase 5.1 remix with the rears being doubled, contrary to popular opinion. The most obvious difference appears at roughly 00:21:52, after the line "Hey jerk, speed kills!" The familiar "Halloween Theme" picks up in pitch... literally illustrating what 'speed' can do in the wrong hands. It's kind of cute, when you think about it from the point of view of a man who was both the director and the composer.

Anyway, while literally every previous release has had this music cue sped up... the track now plays at its normal speed on the 35th Anniversary 7.1 remix. DUN-DUN-DUN!! 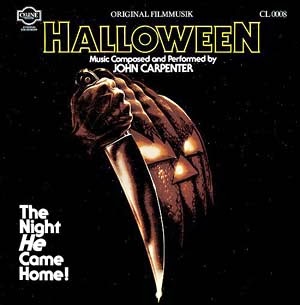 ...in my head it sounded better.

What does this all mean? And what other surprises are lurking on that new 7.1 mix?! Fuck if I know, man. I just want it to be clear that the audio is more confusing than anyone should have expected, and that I'm glad I didn't get into it all until I could sort through the various BD audio mixes myself first-hand. While people have every right to be upset about the lack of an included original mono mix, I think the new 7.1 mix - oddities and all - sounds very good unto itself. Dialog has a bit of a DNRed quality to it, but the soundtrack is as crisp as I could have asked for, and there's a surprising level of natural spatial separation going on. It's not "as it was", no, but it's good enough for yours truly. And if it bothers you that much, hey, word on the playground is that you can paste the previous '07 mono track on the '13 BD's video file without any sync errors, so for all you fix-it types, at least there's a relatively simple solution.

And as for the Bonus Features... ugh, do I even have to say it? Don May of Synapse Films is literally sitting on the original outtakes for the Halloween B-roll material. He owns the deleted footage and outtakes from the film and presented them to the franchise's current master Malek Akkad - son of the films original producer Moustapha Akkad - who deemed the price he put on it too expensive. Christ. Exactly what's on those B-rolls... well, I don't think anyone knows for sure, perhaps not even Don May himself. There could be hours of never before seen alternate footage, and for all we know there could be 15 minutes of... nothing all that excited. But the fact that this footage was tracked down in 2006 and still hasn't seen the light of day is still incredibly frustrating.

Oh, and because I honestly can't remember if I pointed this out or got it wrong or whatever, the commentary on the 35th Anniversary Blu-ray is a newly recorded one, rather than a port of the Criterion LD commentary.

Tune in next time when we cover a release that has nothing to do with John Carpenter. Unless I pick up In the Mouth of Madness before that other thing I'm waiting for arrives... so eh, probably not Carpenter related? Wait, when is that new Arrow tin for Big Trouble in-- no, forget it. No Carpenter, guaranteed.
at 12:09 AM

Any word on if this faux-mono issue is also true of the UK release?

Good question! Sadly, I have no idea...

Leo: My take? Let's say... somewhere between every single episode of The Angry Video Game Nerd, and that glorious scene in Amon: Apocalypse of Devilman where Fudou Akira wakes up panting in a sea of fresh gore.

So yeah. Not entirely positive.

I wish I could say I was even slightly surprised they'd just shit out the atrocious Orange Brick HD masters, but I think once they threw up that "Online Poll" they never posted the results to, I figured the writing was on the wall on this one.

Remastering HARDER is fuckin' expensive. We knew that, they knew that. At this point we're getting "Orange Brick BDs" because FUNi's basically got nothing left. For fuck's sake, they even released the old butchered American broadcast version of DBZ seasons 1 and 2 in a ridiculous NIS style deluxe box set - where else can they possibly go with Son Gokuu?