Dawn of Japan: The Good News And The Bad News 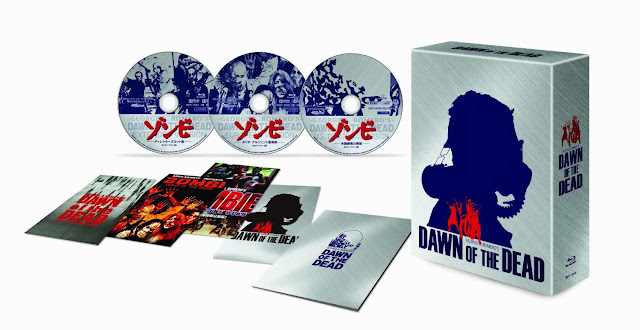 This is the new DAWN OF THE DEAD: 35th ANNIVERSARY BLU-RAY BOX from Happinet Japan. It costs about $150. It promised a brand new HD master, and technically it delivered... but it's, complicated. Let's cover the basics first. 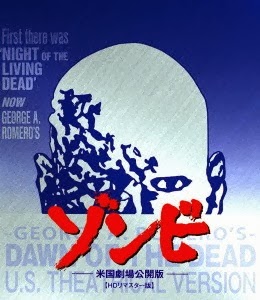 First up is the "American Version" (127 minutes), and has been sourced from an all new 'State of the Art' HD transfer made in 2013. The Happinet Japan release marks the first ever home video release of this transfer. English 5.1 and mono lossless mixes are included, plus the expected Japanese dub and optional subtitles.

The only bonus features on-disc are Trailers and TV Spots for the US version - the George Romero commentary was promised in early marketing material, but appears to be MIA now for whatever reason. 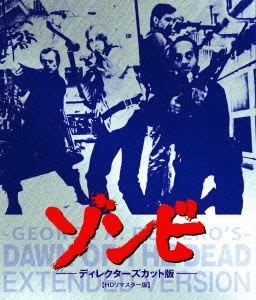 Next up is the "Extended Version" (139 minutes), which features an alternate soundtrack and multiple deleted scenes integrated back into the film. From the looks of things this was done by Happinet internally, using the 2013 HD master and scanning and re-cutting the "extra" footage themselves. That's kind of awesome - though so far, I have no idea how good (or bad) the "extra" footage looks!

Word is the 5.1 English audio mix is a bit of a mess, and my understanding is the original mono mix is actually just a standard Dolby track despite the package listing lossless Dolby True HD. If I'm not mistaken, this has the original Japanese trailers as a bonus feature. 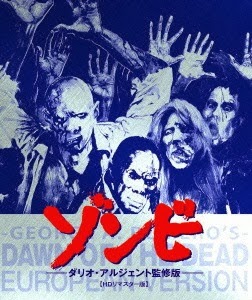 Finally, we have the "European Version" (119 minutes) as supervised by Dario Argento, and often released as "ZOMBIE"*. This, unfortunately, appears to be the same HD master found in France and Austria minted in 2007, and features some of the gnarliest looking CRT grille noise ever put down to HDCAM.

Once again, trailers galore are your primary extra - but this time for the "Zombie" prints. At least this disc also includes a commentary track with the original members of GOBLIN, and an 'expanded' version of the Tokyo Broadcasting System's rarely shown "Suspiria Dub", though how useful either of these tracks will be depends on how fluent you are in Italian and Japanese, respectively.

*Except in North America, where Lucio Fulci's psuedo-prequel ZOMBI 2 became "Zombie". This bizarre conundrum will literally haunt us until the end of time.

The box set itself is handsome enough, emulating the classy silver simplicity of the old Japanese Laserdisc Box, and comes with a booklet and a sealed set of postcards featuring various Japanese poster and video key art... but still, it's $150 with virtually nothing in the way of bonus features, or even any solid guarantees that the transfers would be any good. They also sell each disc individually for about $50, but I'd imagine anyone who's eager to import a $50 Dawn of the Dead Blu-ray in the first place is the sort of person who'd want all three by default.

To help put this into perspective, the Japanese R2 DVD box set from a mere 3 years ago - which, to be fair, was closer to $200 - included two bonus discs, primarily consisting the QUANDO ALL'INFERNO NON CI SARA PIU POSTO and ZOMBIEMANIA documentaries. Look, I'm not saying you have to throw DOCUMENT OF THE DEAD on literally every fucking box set for this flick ever made, but cripes, it's not like there's a dearth of bonus content to pick from!

With all of that in mind, you'll understand why I promised myself I wouldn't buy this without at least seeing screenshots first... and, no, I still haven't thrown down to get a set shipped to my door. My car's dead, I spent way too much before Christmas, blah-blah my needs... I haven't ruled picking the set up out entirely, but having heard a comprehensive rundown from a friend I trust on the matter, and straight up seeing what the set has to offer, I can certainly wait, even with the "threat" of this fancy, and likely strictly limited edition selling out before I can get my hands on those sweet, sweet postcards.

So... you wanna talk about the screencaps anyway?

The good news is that - based on this limited but decent COMPARISON - which was, as far as I can tell, originally re-posted by Basement of Ghoulish Decadence's Jayson Kennedy - this does appear to be a new transfer from 35mm, which Happinet Japan assures us was "State of the Art" and made in 2013. The results are pretty similar to what happened when Shout Factory released DAY OF THE DEAD using a new HD Telecine earlier this year; the framing is a bit tighter, the contrast is a lot brighter, but overall the filmic texture has been restored and clarity has been improved, which - in my eyes, at the very least - was a substantially bigger problem with Anchor Bay's release of Dawn of the Dead than it was with Day of the Dead. So far, so good!

Without getting into a big "thing" about how historical accuracy is always the best source for how a film "should" look, and how any given previous home video version might not be an accurate reflection of either the film materials or the film makers' original intent... fuck it, I'm just going to put my balls on the line and say, without hesitation, that this looks like ass. Straight up gnarly green-tinged ass. Literally no previous DVD or Blu-ray release of Dawn of the Dead looked like this... I guess the old 4:3 Laser Paradise DVD in Germany was almost as wonky, but even that was blue, not green. And if we're going to start comparing 15 year old German dubbed DVDs to explain why a "State of the Art HD Master" minted in the last 12 months looks fucked up, we're clearly trying way, way too hard to justify our expensive import purchases.

You see this? This is the same exact screenshot, just without the boosted black levels and weird-ass green color grading. This isn't even a good example of what could have been done with this master - I did this in about 3 minutes powered by nothing but disappointment and goddamn Photoshop CS2; an actual, professional film colorist, particularly one with proper access to a full 4:4:4 RGB source, could probably make this shit look exponentially better using nothing more than a rubber band, a paper clip and a drinking straw.

I'm not saying "Don't Get the Japanese 35th Anniversary Edition of DAWN OF THE DEAD". If you're the kind of person who'd even consider dropping that kind of money on a set like this... yeah, you probably still need it. I'm just saying you should know that you're walking into a $150 clusterfuck.
at 1:58 AM

Hate to seem presumptuous but there isn't a color grading problem.

Discs 1 and 2 were accidentally authored with RGB-PC or "Expanded" color.

You have to switch you're player's output to PC or Limited for the movie to look right.

I made an AVS thread of all other titles accidentally sent to market this way:
http://www.avsforum.com/t/1496542/blu-rays-with-incorrectly-encoded-for-rgb-pc-levels

Zollman: Due to the very nature of the beast, I refuse to make a distinct call like RGB vs PC levels without having the full disc on-hand.

Without being able to point to something *obviously* wrong - like a fade out, positive print damage, matte bars or something similar (as I could do with the BLOOD TRILOGY disc, for example) - it's hard to say if the levels themselves are mathematically fucked up, or if the black levels are just boosted due to poor color grading.

Moreover, if this is the case (and it might be!), RGB-PC levels would have dull, gray looking highlights. The caps I've seen so far suggest that, if anything, the highlights on the Blu-ray are already clipped. That doesn't suggest that we're seeing "Expanded" color... or, if it does, it means the contrast is so far out of whack that we're dealing with a whole new set of problems!

Besides, even if we were to tweak the levels from "Expanded" to "Limited" the colors still lean towards a sickly green. No black crushing is going to make the flesh tones look any less... gross.


The Arrow disc has the same green bias.
Because Happinet's scan is of the 2004 IP Anchor Bay and Arrow's blu-rays came from.
Anchor Bay just did additional color timing on theirs, while Arrow did nothing.

I have all the discs in question and tested everything.
The video is encoded in RGB-PC, all black is medium gray.

Maybe you should have the disc in hand before you make any kind of unintelligent remark based on other screen caps that were badly taken and posted, All Star.

Zollman: The Arrow Video release absolutely has a green bias compared to Anchor Bays' transfer, but even then it's nowhere near as over the top as the new Japanese transfer appears to be.

See HERE for what, at this moment in time, remains the best comparison between the various transfers available.

That said, I'll gladly take your word on the RGB-PC levels for the time being.

Anonymous: Geez, did I piss in your cornflakes or something?

The only "unintelligent remak" I've made thus far is that the color grading looks a bit pants on the screenshots I've seen. This is based on screenshots taken by two separate individuals, no less, and the general consensus from various forum posters seems to be pretty similar (so far, anyway).

If you want to play the "badly taken screen caps" card, you're free to provide me with some yourself... unless, of course, you're defending a release you don't own. Which would be pretty hypocritical, don't you think?

When there's no more room in hell...

the trolls will walk the earth.

I picked it up, and despite the issues I'm pretty happy with it. The new scan isn't the best by any means, but it plays better than the old Divimax master.