I don't know of words in the English language to properly express how incredible that was, so here's the picture perfect nightmare fuel that is the Revoltech Woody to sum it up for me: 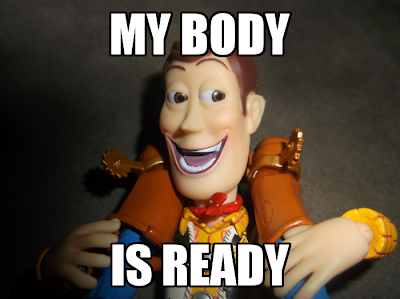 Should this thing blow up like crazy and make a cool million, we'll get a full blown feature length epic. I LOVE that trailer, and I think this has the potential to be the three-point landing that completely nonsensical but incredibly awesome projects like Manborg , Adam Chaplin and Helldriver have all paved the way for. The insanely rapid fall in costs for "Hollywood Style" visual effects mean that any madman with the insanity to put his vision into After Effects can make it happen on a skeleton crew, and while I have no clue how good David "Laser Unicorns" Sandberg is at making an actual movie, he's proven enough in that two minutes up at the top to get me goddamn curious. There's something maniacally genius going on here, and frankly, I want more.

That said, I do get the nagging feeling in the back of my skull that this would almost surely play best at the original planned 30 minute runtime. The glory of bullshit like this is that it works best in short bursts; call me a cynic if you like, but to this day the best thing Yoshihiro NISHIMURA has ever made is Zetsumetsu, not because it's genius unto itself, but because as a 5 minute short it doesn't fucking matter what the thing has to say. It's just madness caked in more madness, lather, rinse and repeat. When you start stretching this shit out to feature length you often get a lot of padding and a lot of stuff that doesn't work, which is... well, you'll remember that was basically my whole argument against Astron-6's similarly ambitious horror mash-up Father's Day: Fun idea and no bounds to the lengths the film would go to make it work, but there's only 45 minutes worth of gold to be mined with that premise, so the 2 hour flick just kind of drags its ass toward the finish line. Can you do make that stuff stick for the long-haul?

I honestly don't know. Don't really care, either; worst case scenario, this "movie" is a hilarious train-wreck and my $30 to own a special edition Blu-ray was completely justified. I'm tempted to bump my pledge up to get the poster, too, but without a finalized piece of key art I just can't convince myself it's worth it.
at 10:20 PM

Labels: Absurd, Kickstarter, Lulz, What is this? I don't even..., WTF