ADVENT TIME! With Griffith the Hawk, and Guts the Human 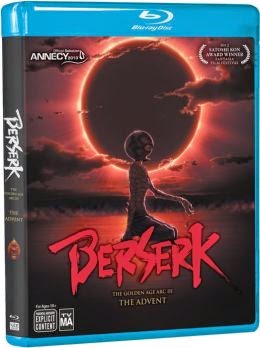 Oh hey, look what came out when I wasn't paying attention.

As I've already discussed at length in public at one point or another, I have very mixed feelings about this BERSERK: THE GOLDEN AGE ARC/ベルセルク 黄金時代篇 - a trilogy of feature films produced by CG specialist STUDIO4°C, and directed by the largely video-game experienced Toshiyuki KUBOOKA, covering roughly books three to fourteen in Kentaro MIURA's original Berserk manga. The final film in the cycle - THE ADVENT - covers the final days of the "Golden Age" storyline, and covers the dissolved of the Band of the Hawk, and the traumatic fallout which turns Guts into The Black Swordsman, Caska into his emotionally shattered mute companion, and Griffith into something much worse than either of them...

Since I've already spoken about the film at-length, let's just talk about the broad technical details in brief. This isn't much of a review, I admit: Just a few bullet points for anyone who may have been on the fence about these films who want to make sure they aren't wasting twenty bucks on a crappy release.

First and foremost, Viz should be applauded for one thing: This is the complete, uncensored "R-18" version of the film deemed too risque for Japanese theaters. I'm sure they had to fight to include this, since it's considered a bonus feature on the import release, but the "Theatrical" version is nowhere to be seen. I'd have loved for the censored footage to have been included as an Easter Egg just as a curio, but as that would put Viz in the uncomfortable spot of literally including MORE RAPE! (TM) as a selling point on a title that's a stone-throw shy of pornographic, I guess I'm not terribly surprised by its omission.

As with the previous two Viz Entertainment Blu-ray releases in the trilogy, what we get is a 1080p 24fps transfer with a somewhat thin bitrate of 13,179 kbps in its original 2.35:1 aspect ratio. The transfer has a subtle diffusion filter over everything to try and blend the 2D and 3D elements together as best it can, and there's a level of omnipresent digital banding that creeps up in a particularly obvious way during darker scenes, but it's safe to assume that they're native to the animation process, not a glitch on Viz' mastering end: There's no chromatic subsampling errors, edge ringing, macroblocking, or anything else that would suggest obvious mastering gaffes.

Audio is a similarly suitable Japanese 5.1 DTS-HD Master Audio (16-bit) track with English subtitles, as well as an optional English dub up to the same technical standard. English subtitles are forced on the Japanese track, as was the case with the previous two discs, but the more this becomes the norm the less salty I get about it. It's annoying on principle more than anything, and I'm slowly coming to feel that if you're hardcore enough to watch the film in its original language without needing subtitles... you're probably hardcore enough to afford the Japanese import. Or at least smart enough to be using an HTPC with AnyDVD HD. It's worth noting that the uncensored "R-18" version released in Japan only has stereo audio, so this presentation is technically a superior package to the $65 import version. Neat!

Surprisingly, the DVD release actually contains fewer extras than the Blu-ray - both releases include
the five minute "Breakthrough" animated music video used to promote the film, a pleasantly compressive collections of trailers, teasers and TV spots, and a production gallery. Nothing incredible so far, but all appreciated content in its own right.

The first Blu-ray exclusive is an eight minute long interview with Studio 4°C producer Eiko Tanaka hosted at San Diego Comi-Con 2012, conducted in Japanese with English subtitles. The original pilot that's so far only been glimpsed as leaked camera photos was discussed (though seemingly will never be released for public consumption), as was the fact that this was originally set to be a 2 and a half hour single movie, but lengthened when they realized how much content was necessary for even a bare-minimum adaptation of the complex tale of Guts and Griffith. This new bit of information actually explains some of the weird pacing and surprising omissions, including Wyald, Guts' childhood, and Guts and Griffith's "moment" taking a bath early on in their brotherhood at arms. This was recorded when the third film was still in production, so Tanaka - accurately enough, I would say - says that they're approaching this from the perspective that, like Shakespeare before it, the violence and cruelty is an integral part of Berserk's drama, and hopes that adults who don't typically watch animation will give it a chance regardless of the fact that the film is animated.

The next featurette, sadly, is much less interesting. "The Battle For Doldrey: US Premiere Highlight Reel" sounds like it had the potential to be something fun, but in actuality it's a wafer-thin two minute promo showing off some spectators getting some cool swag from Viz, and then a handful of soundbytes from very excited fans who, in my estimation, were giving the film more credit than it rightly deserves. The thing is so cheap and poorly made that all dialogue comes out of only the left speaker. It's nice that Viz tried to promote the film, I suppose, but there's just nothing to chew on here.

Viz has, to their credit, blown at least one of my expectations away by presenting over 50 minutes of English dub outtakes. Normally this is the sort of thing that would make my flesh crawl, but anyone familiar with NYAV Post's dub of the TV series produced back in 2000 will know that the outtakes were the sort of guilty pleasures you don't get very often outside of intentionally badly dubbed movies like Kung Pow! Enter the Fist or What's Up Tigerlilly? Sadly, I've got dishes to scrub and sexy party to get to, so I haven't had a chance to see if these are also a gut-busting gem, or just an hour of dreck, but with much of the NYAV Post dub cast having returned, you can expect at least a few moments of eye-roll inducing gold.

The Japanese release has an entirely different "Premiere Event" feature and a running audio commentary with the production staff, but their omissions here aren't particularly surprising. Disappointing, perhaps, but at a third the price I just can't convince myself to complain.

So, there you have it. Viz managed to release the uncut version of the controversial Berserk finale, they did a damned decent job of it. Odds are it's kicking around at your local Best Buy for no more than twenty bucks. If you're a fan of Berserk, or epic fantasy/psycho drama in general, getting all three films now are a no-brainer.
at 11:33 AM

Thank you Viz for not censoring this. I ordered the blu-ray