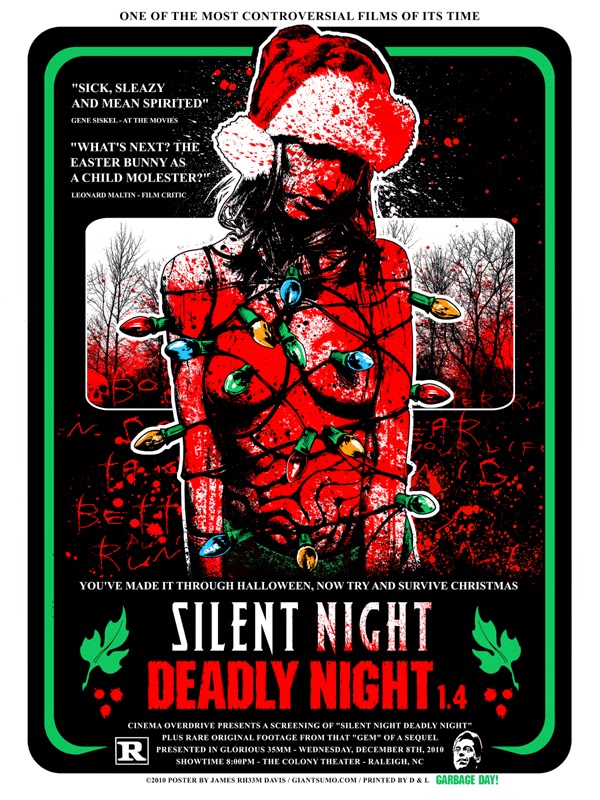 So, the good news is that Anchor Bay put out the original SILENT NIGHT, DEADLY NIGHT on Blu-ray for its 30th anniversary, complete with a new commentary track.

The bad news? It looks like garbage day. Based on the smattering of caps that have surfaced, with the most relevant sampling being found HERE, I have zero problem writing this off as an upscale of a Digibeta made in 2003. I've jumped the gun once or twice, I know, but this is such a fucking joke I'm only sad that there's no punchline.

The saddest part? This isn't even the first time Anchor Bay has shat out an upscale. With all due respect to Alyssa Milano's breasts, I just never cared enough about the 1995 Embrace of the Vampire to look into the BD release, but as you can see, it's unwatchable 486i dreck upsampled to 1080p mediocrity.

Anchor Bay, at least whoever's in charge of their catalog titles, can go fuck themselves with a plastic baby Jesus. If you don't have an HD master and 35mm film materials still exist, you don't do an upscaled SD release. It's not that hard to grasp, is it?
at 10:38 PM

Sorry for offtopic, didn't know how to contact you. Could you please look at BU's Hell of the Living Dead disc? Something similar to Burial Ground's missing frames is on it.
Thanks in advance.

Drop me a line at KentaiFilms@Yahoo.com if you like.

I've not had a chance to poke around the BU double feature, but it's been on my "To Do" list for weeks now.

Just dropped you an email.

What a fucking let down! Those caps look like shit! Thanks for saving me some cash, because I was planning on buying it. Hopefully Arrow still holds the UK rights and puts out an actual HD release.

Anon: Thanks for the tip! Shit's been hitting the fan left and right, sadly, but rest assured I plan to give that BU Double Feature my full attention... eventually.

Anthony: Always happy to save readers a couple a' bucks.

At this point, the only real victim here is SILENT NIGHT, DEADLY NIGHT.

Do you think this is a an upscale because of the restored gore footage they spliced back into the R rated version? I remember the difference in quality between the two were noticeable on the DVD.

Oh my gewrd!!! This is why I love Kentai! I nearly pissed myself at "shat out an upscale" Lmao

Any disease will surely recover, if we want businesses seek treatment :)