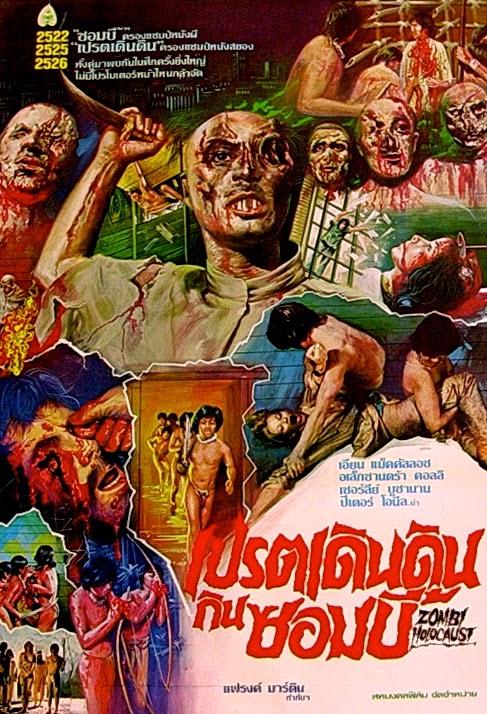 Thai posters are glorious, in their own special way.

UK genre label 88 films has, up until now, mostly been a sort of "Bizarro" equivalent to US labels like Full Moon and Troma Films - releasing high quality encodes and bonus feature packed special editions of the same movies that the US branches crapped out in whatever quality they could manage. They're limited by the same materials as their US equivalents, but whoever is handling the materials clearly has a better grasp on it, and the results are a notable improvement for about the same price. They've moved on to doing a wider range of American cult movies - slasher flicks, in particular - and while I'm not the biggest fan of every title they've announced, I like these guys on principle. Plus, they're selling the original Toxic Avenger, Castle Freak and The Last Horror Film at cheaper prices than their North American equivalents; if you need a better excuse to support a region-free UK label, you may need to re-think your trashy movie priorities.

Their most recent announcement in particular is an interesting one: THEY WANT TO REMASTER ZOMBI HOLOCAUST. They're asking for 7,500 pounds ($11,786) to craft a new 2K scan from the camera negative, and if you pledge 20 pounds (or $39.28 with all shipping fees) you get a copy of the finished BD, complete with an exclusive slipcover for backers. They're up to a bit over one-third of their stated goal, and have admitted that if they fail, they'll default to using the same crumby Media Blasters produced master I bitched incessantly about when it was released a couple years ago. No, it wasn't an upscale as I'd initially guessed, but man was it crap all the same...

I'm trying to get people to see this not because I think Zombi Holocaust is a particularly good movie - frankly, this is all anyone should waste their time with more than once:


DOCTOR BUTCHER M. D - MEDICAL DEVIATE!
Can we please, please get a chewed-up grindhouse transfer as a bonus?
That was by far the best aspect on the BD release of JUST BEFORE DAWN...

There's about three minutes worth of really great one-liners and gore show pieces, but it's such a lazy and shallow imitation of substantially more worthwhile Italian genre fodder that you're really better off just having a double feature with Lucio Fulci's Zombi 2 and Umberto Lenzi's Eaten Alive for a much better experience. Still, watching B-movies cannibalize their own trends is a fascinating little historical foot-note unto itself, and it's nice to see any studio willing to give it the white glove treatment, top shelf content or not.

I know 88 Films has done some great work, though I'm disappointed to admit I've yet to purchase any of them myself. This reminder - and the great prices on their own website - are tipping me into trying a few of their catalog entries, and you can bet I'll be grabbing that sweet exclusive slipcase for a movie I've always thought was pretty "meh". To be honest, I hope this does so amazingly well that they'll consider doing a similar project for BURIAL GROUNDS. I don't doubt the OCN for that is a bloody mess, but for a dull turd like this to get a new 2K scan and for a shambling, accidental masterpiece like that to remain in its current state would be utterly unforgivable. In a karmic sort of way, I mean.

Not sure what's up with Burial Grounds, but if you want to prove that there's a market for trashy good Italian exploitation, give them money. If you want to get properly mastered garbage cult movies, you have to prove there's money to be made in properly mastering them in the first place. Arrow Video has done some cool stuff using similar means - Happiness of the Katakuris and the Walerian Borowczyk films in particular - but those are the rare hybrid of B-movie schtick and high-brow symbolic transcendence that will always get curious support, if nothing else. Zombi Holocaust is another beast entirely... sort of a big slobbery Boxer to a batshit crazy Chinese Crested. If that makes any sense. 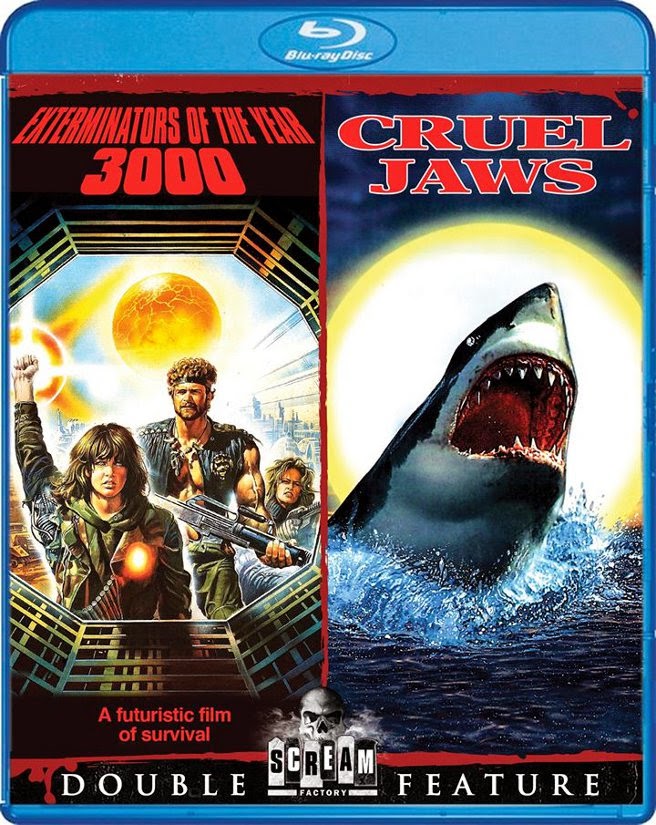 Buy this, too. Yes, I hate recommending Shout Factory titles unseen myself. But fucking hell, is that CRUEL JAWS? On Blu-ray?! How did-- when the fuck-- REALLY?!*

Goddamn it Cliff, I'm buying this even if it's a train wreck, even knowing that their upcoming "Special Edition" release of DOG SOLDIERS is a fucking upscale. So just skip that pile of ass and get this instead... and hope it's not a pile of ass.

Honestly, I wish I had one label left I trusted. Well, besides Arrow Video. I'm not sure what to make of 88 Films just yet, but I've certainly got my eye on 'em. We'll see, ladies and gents. We'll see.

* UPDATE: Ha! Apparently Shout Factory just now realized that CRUEL JAWS is chock full of footage "borrowed" from a certain Steven Spielberg franchise, and have pulled the plug on the release for fear of this release getting legally hate-fucked into oblivion. For those unaware, it's this very issue that's prevented the film from ever getting a legit DVD release up to this point outside of a few European releases from labels that had less than zero fucks to give, and it's long been figured that the film would either have to be dramatically re-cut, or someone would have to crap out a limited edition in the hopes that Universal would simply ignore it.

Thanks to hansolo for pointing out that Shout Factory finally did their research... after taking pre-orders. EXTERMINATORS IN THE YEAR 3000 is still coming out, for those who are more excited by middling post-nuke adventure movies than hilarious shark flicks. This is pretty far down on my list of post-nuke flicks I'd love to see in HD, but with the loss of CRUEL JAWS, I'll simply bide my time and see what reviews say about this now single-feature.
at 11:48 PM

I read from Scream Factory's facebook today that Cruel Jaws is cancelled due to copyright issues. Lot's of footage "borrowed" from Spielberg's Jaws?

"We are sorry to report the following news but the Bruno Mattei film CRUEL JAWS will not be coming out as a double feature with EXTERMINATORS OF THE YEAR 3000 next year as originally planned. EXTERMINATORS will now be a standalone blu-ray release at a lower price.

It came to our attention through several of our fans that CRUEL had several scenes in it of unauthorized footage from Jaws 1-3 and other Italian-made shark films that makes it impossible for us to release this in the U.S. & Canada without risking legal ramifications..."

hansolo: I'm afraid it's that massive reliance on "stock footage" from other, better-funded movies that have kept this flick more or less out of the public eye since the 1990s. I don't know what crazy fancy convinced Mattei's producers that nobody would notice that there's a ton of footage from FUCKING JAWS, but it's prevented the flick from ever having even a legitimate DVD release, as far as I can tell.

The funny thing is the Italian licensors will happily give it to you, as this little show has proven... but once the potential label does their homework and realized Universal could fist-fuck their money hole for far more than the Mattei flick is worth, none of them follow through. There must be some crazy loophole that'll get this flick released, but as of yet, nobody's found it.

A shame they didn't delay this a while longer and give us DEVIL FISH as a consolation prize instead. Ah, well.

I mentioned the missing frames and weirdness of Burial Ground on the High Rising Productions Facebook page, linking to both your post on it and Kevin Pyrtle's review, and HRP (Calum Waddell probably) said that 88 Films are aware of both reviews. Hopefully it means that even if it is the same shoddy master, 88 will go the extra mile of creating a version with the most footage intact and edit the audio accordingly. Though if they were to go through the trouble of fixing it, one would think they'd just do a new scan while they're at it—so yeah. hopefully if this Zombi Holocaust campaign succeeds, they'll look into restoring Burial Ground properly.

I'm quite liking 88 Films. I don't own many of their releases, but Castle Freak and Pit & the Pendulum apparently had better encodes than Full Moon's discs, and having owned both Troma and 88's BDs for Toxic Avenger, I definitely prefer 88's for the scratch removal they did. There's still a lot of pops and dirt that crop up, but it's a lot less distracting than Troma's chewed up version. Plus, they threw in the extended Japanese cut of the film (in SD from what looks like a shitty VHS copy), which Troma, bless their hearts, were selling separately.

88's Toxic Avenger 2 is also a good release for a not so good movie. It's uncut and looks good, so I can't complain. Best of all: they announced Hollywood Chainsaw Hookers from a 2K master! I love that little cheesefest.

Kristoffer: The BD for TOXIC AVENGER 2 is the unrated version? Sweet. Pre-order runtimes suggested the R-rated version, if I'm not mistaken, but I hadn't looked too hard into it.

I feel a little disappointed in myself that, so far, I've yet to buy any of their titles. I love CASTLE FREAK, PUPPET MASTER 3 and I've always wanted to see THE LAST HORROR FILM, but with so many over-priced imports distracting me I guess I kind of forget they even exist. I might just have to pick up those three in one go to rectify that whole situation...

I was pretty worried about receiving the R-rated cut for Toxie 2, but thankfully it's the extended cut.

88 indicated on Facebook that an overflow of funds for the Zombi Holocaust campaign could potentially be used toward restoration of other upcoming films, Burial Ground being mentioned by name. That's gotta be the most ass-ugly BD that I own, so I'd love a proper remaster.

Kentai, will you be doing a review of Funimations Bebop release? There's some screenshots floating in along with reviews saying they've made it progressive. Did they IVTC it flawlessly? Is there horrid banding like their Lain release? Really curious about this set.

Anon: Haven't had much time in the last few weeks to review / deconstruct anything, but rest assured I've got my eye on FUNimation's release of COWBOY BEBOP. There's some good news and some bad news, but we'll get to that once I have both the US release and the UK release on-hand and can double check every aspect worth bringing up. I won't be comparing the JP release this time, since the UK release is a curious enough counterpoint, and the version most English-friendly buyers already own anyway.

Short version, based on everything I've seen so far: It's not bad, but it could have been better. Those new credits are pretty bleh and the compression isn't perfect, but it's arguably better than the grainless and banding-filled Anime Limited import. (Plus, 1080i is an abomination and Bandai Visual should have just made new 1080p/24 credits from the start.)