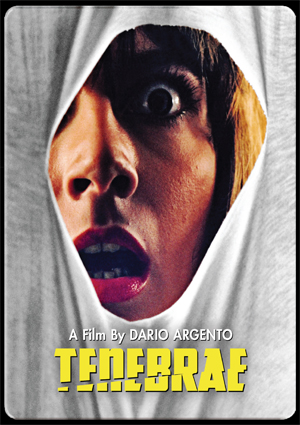 For those who might not pay as close attention to these sorts of things as I used to, a quick heads-up; Don and Jerry over at Synapse Films are now taking pre-orders for their Limited Edition of Dario Argento's violent, clever and strikingly shot 1982 giallo, TENEBRAE. The release date is "officially" the 23rd of this month, but seeing as how they're literally waiting for the manufactured copies to arrive, it may get to you even sooner. (And since I rarely have a reason to pimp his stuff, kudos to Synapse for giving the coveted cover work to Silver Ferox Design!)

If you kept up with the Demons releases from a year or two back, you know the drill; it's $46 shipped, you get a nice steelbook with a DVD and a Blu-ray (plus a remastered CD this time), and most importantly, dozens of man-hours have been put into taking the best elements available and fixing what - in this case - both Arrow Video and Wild Side did not. It seems the now-infamous scratch removal artifacts that plagued the European BD releases have been repaired(!), and Don May himself has given the entire master a shot-by-shot color grade. Mercifully this is a film that's never had the intense controversy surrounding its home video presentation it as, say, Suspiria or The Bird with the Crystal Plumage, but it's got such a unique and difficult to handle "look" by design that the varience of all prior releases have only raised further questions. I have little doubt that however the

The new release also boasts some interesting bonus features, including a seamless branching option to see the now-virtually unseen English language insert shots from "Unsane", along with the feature length Yellow Fever: The Rise and Fall of the Giallo documentary, plus a handful of other goodies that are a bit less over the top. Good stuff overall. I was a bit disappointed the entire "Unsane" print wasn't included as a bonus, but Synapse has since explained that the American 35mm prints were uncut (MPAA trims aside), while the 90 minute VHS release was seemingly just butchered to use a cheaper T-90 cassette. At that point, fuck it, just make it complete and move on.

Again, if you remember the Demons releases, this also likely means that a substantially discounted but bare-bones Blu-ray is sure to follow in a half-year's time despite Synapse "having no current plans". I can't fault Synapse for wanting to play both sides of the market here, and seeing as how they've yet to sell out of either Demons tin, they probably made the right choice giving those as many sales as humanly possible. This is very likely to be the best 1080p presentation this 34 year old thriller's going to get, so if - like myself - you want to be done buying and comparing releases of this fucking movie once and for all, consider the price more a peace of mind tax than anything.

To be honest, it's not my favorite Argento flick. It's good - damn good, at times - but it had the nasty habit of being made after both Profondo Rosso and  Suspiria, but before Argento would lose his mind in an experimental way as he would in Phenomena and Opera, only to lose his absolute shit in the years that follow, but... let's not get into all that. Not now, at any rate. In the end Tenebrae is one of those films you can show "normal" people to explain why you like Italian thrillers and this one is expensive and well produced enough that they can see the appeal without having to forgive the usual shortcomings of the cheaply-made and fetishized entries that make up the bulk of any genre's outings. It is what Princess Mononoke is to Japanese Animation, or what Jackie Chan is to Hong Kong movies in general; it's actually pretty damn good, but it's such entry-level stuff that's been over-analyzed to the point of parody that actually talking about it now seems pointless. Yes, the crane shot remains as jaw-dropping as ever, and yes, Argento casting doubt on his own motives as an artist is a clever touch, and yes, parts of the soundtrack are amazing... anything else to add?

No? We're good? Cool, let's just buy it and move on for a couple years.

With a certain Dario Argento superfan no longer offering commentary on non-Arrow Video transfers, you can bet your ass I'll probably say something once this sucker comes in, if only on principle. Odds are it'll be a lot of good things with Synapse's track record, but hey, we'll just have to wait and see!

No release date or pre-order yet, but supposedly Synapse is authoring Phenomena as you read this. That's the Argento film most desperately in need of careful repair work (aside from Suspiria, which Synapse is also working on), so while I expect the Synapse Tenebrae Limited Edition to be quite good, I don't think it'll be too full of surprised either.

Phenomena? I'm sure we'll have plenty to talk about once Labyrinth's darker cousin comes out to play. Code Red is also working on a new 2K scan for Opera, go figure. But screw that, one fourty dollar domestic Argento Blu-ray at a time, please!